That message ran counter to the optimistic assertions in recent days from the White House.

New Zealand reported its first death from the coronavirus in more than three months. 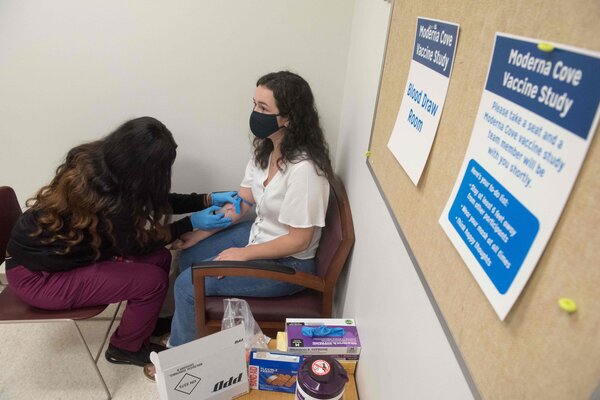 Moncef Slaoui, the chief adviser for the White House vaccine program, said on Thursday that it was “extremely unlikely but not impossible” that a vaccine could be available by the end of October.

In an interview with National Public Radio, Dr. Slaoui said that the Centers for Disease Control and Prevention’s guidance to states to prepare for a vaccine as early as late October was “the right thing to do” in case a vaccine was ready by then. “It would be irresponsible not to be ready if that was the case,” he said, adding that he had only learned of the notification through the news media.

But Dr. Slaoui, the chief scientific adviser of the Trump administration’s coronavirus vaccine and treatment initiative, called Operation Warp Speed, described getting a vaccine by late October as a “very, very low chance.”

Dr. Slaoui confirmed that the two main candidates, referred to as Vaccine A and Vaccine B by the C.D.C., were being developed by Pfizer and Moderna. He said there was “no intent” to introduce a vaccine before clinical trials were completed. The trials would only be completed when an independent safety monitoring board affirmed the effectiveness of the vaccine, he added.

The NPR interviewer, Mary Louise Kelly, raised the timing of a possible vaccine given in the documents the C.D.C. recently sent to public health officials, and asked whether its delivery was being motivated by political concerns.

“For us there is absolutely nothing to do with politics,” Dr. Slaoui responded, saying that those involved were working as hard as they could because so many people were dying of the coronavirus every day. “Many of us may or may not be supportive of this administration. It’s irrelevant, frankly.”

Though he expressed doubt that a vaccine would be ready by the end of October, Dr. Slaoui said, he firmly believed “that we will have a vaccine available before the end of the year and it will be available in quantities that can immunize patients, subjects at the highest risk.” That included the elderly and those working in jobs with high exposure to the virus.

The virus forces millions out of Latin America’s universities, reversing years of progress.

Over the past two decades, millions of young people in Latin America became the first in their families to go to college, a historic expansion that promised to propel a generation into the professional class and transform the region.

But as the pandemic grips the region, killing hundreds of thousands and devastating economies, an alarming reversal is underway: Millions of university students are leaving their studies, according to the Inter-American Development Bank.

For example, enrollment is expected to drop by as much as 25 percent in Colombia by the end of the year, with similar numbers expected in other countries.

The exodus threatens decades of achievement that helped move entire communities out of poverty.

Since the early 2000s, enormous investment in elementary and high school programs — and a decision to build new universities — helped higher education enrollment across Latin America more than double, according to the World Bank.

Amid lockdowns, youth unemployment has spiked, and many students cannot pay tuition, which even at public schools can cost anywhere from one to eight times the monthly minimum wage.

Most courses have moved online, but millions do not have internet, or even a reliable cellphone connection.

Some students said they were going hungry to pay for data, while others hid in stairwells to steal Wi-Fi from neighbors.

At the Universidad Nacional, a prestigious public university in the capital, Bogotá, several students went on hunger strike on Aug. 10, camping out in a dozen tents on the otherwise empty campus, calling on the government to cover their tuition as their families hit bottom.

“I don’t see any other way to pay for the semester,” said Gabriela Delgado, 22, a music student and hunger striker.

For weeks she slept in a tent between the economics and humanities buildings, shuffling to daily medical check-ins. When she had the energy, she pulled out her cello to play fragments of Bach for fellow protesters.

The strike ended on Aug. 28 without the government’s having met their demands.