Banks throughout the country are using ultraviolet light or high temperatures to disinfect yuan bills, before sealing and storing the money for up to two weeks and recirculating them. The deputy governor of China’s central bank said banks have been urged to provide new banknotes to customers whenever possible. Fan Yifei added the central bank also made an “emergency issuance” of four billion yuan in new notes to Hubei province before the recent Lunar New Year holiday.

But it remains unclear how impactful the disinfection of bank notes from the central bank will be, due to an increasing number of Chinese people.

An Ipsos survey in 2017 found three quarters of Chinese respondents claim they could survive a whole month without using more than 100 yuan in cash.

The rapid outbreak of coronavirus means there is now a huge rush to disinfect public places and minimise contact between people. 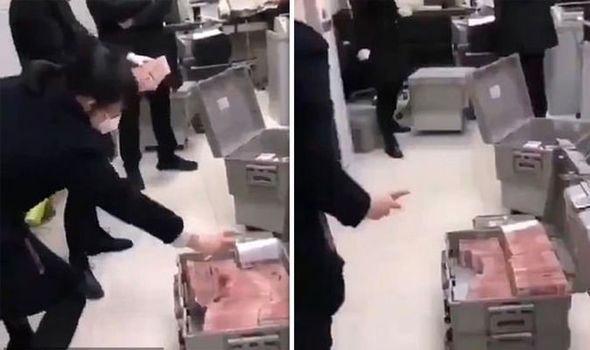 The World Health Organisation (WHO) has said coronavirus – otherwise known as Covid-19 – can be spread through contaminated objects, as well as droplets and direct contact with infected patients.

Disinfectants and surgical masks are selling out in a matter of days in pharmacies throughout China.

Office buildings in the country packets of tissues in lifts that tenants ad urged to use when pressing buttons to travel to floors, while ride-hailing company Didi is encouraging its drivers to disinfect their cars every day.

The latest measures from China come after the country reported 143 additional deaths from coronavirus on Saturday but a slight dip in new cases.

The death toll in mainland China rose to 1,523.

The number of new cases was down from the 5,090 in the previous 24-hour period after authorities changed the basis for counting patients.

The number of new cases has fluctuated over recent weeks, feeling optimism the disease might finally be under control, but also brought warnings that such hopes are premature.

On Thursday, the number of new cases reported by authorities in Hubei province reached 15,152.

That included 13,332 diagnosed by doctors’ analyses and lung imaging instead of the previous standard of laboratory testing.

The National Health Commission said an additional nine temporary hospitals have opened in gymnasiums and other public buildings, with 6,960 beds in Hubei province.

An elderly Chinese tourist infected with the coronavirus has died in France, becoming the first fatality in Europe and the fourth outside mainland China from the deadly disease.

The 80-year-old man died at the Bichat hospital in Paris of a lung infection due to the flu-like virus.

French Health Minister Agnes Buzyn said: “We have to get our health system ready to face a possible pandemic propagation of the virus, and therefore the spreading of the virus across France.”

Robin Thompson, an expert in mathematical epidemiology at Britain’s University of Oxford, said a death win Europe was not surprising as there re nearly 50 confirmed cases across the continent.

He said: “The most important thing to point out, however, is that there still hasn’t been sustained person-to-person transmission in Europe.”