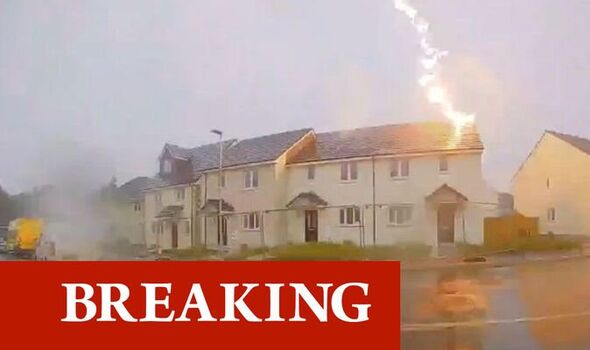 An incredible video released by firefighters captured the moment the lightning struck the roof of the  house.

The newly built home was in a housing estate on the edge of Redruth, currently under construction.

Sparks cascade down the roof and the crack can be heard throughout the estate.

A slate appeared to be knocked off one corner of the home.

Crew members from the Tolvaddon Community Fire and Rescue station in Camborne shared the video after they were called out to the incident early yesterday afternoon.

Fortunately no one was hurt in the incident.

In its Facebook post, the firefighters said: “Crews around the county are currently dealing with numerous incidents involving lightning strikes.

“Here’s one which crews from Tolvaddon have visited this afternoon. Crews had difficulty locating the incident, please consider using ‘what 3 words’ in addition to the address when reporting an incident.”

“What 3 words” is an app that gives users a unique combination of three words to indicate their location to within 3 metres, allowing for authorities to find them easily and precisely.

The station sent out two pumps and the duty officer to deal with the incident.

A spokesman for the service said: “Fortunately nobody was hurt, the incident occurred in the Redruth area and there was slight fire damage to the buildings.”

36,000 lightning bolts were recorded across the UK in a 12 hour period yesterday as storms swept the country.

The Met Office had issued a yellow warning until 4am for much of the west of the UK, including parts of Wales and the West Midlands.

These included warnings of driving conditions being affected, as well as possible damage to buildings and businesses.

The agency added that “some flooding of a few homes and business” was “likely”.

The Met Office warned: “Thunderstorms are likely to develop across parts of southwest England and Wales during Monday afternoon and become more organised through the evening.

“Lines of thunderstorms are expected to then move north during the early hours of Tuesday and gradually weaken as they clear into northern England before dawn.

“Whilst some places will see little or no rainfall, a few locations may see torrential rain with 20-30 mm falling in one hour and 50-80 mm in three hours.