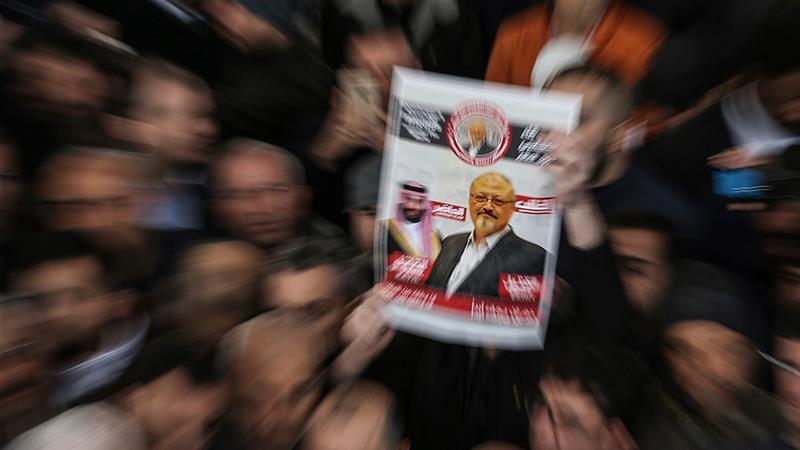 Members of the US Congress, activists and families of detainees have slammed Saudi Arabia’s human rights record while urging the United States government to take action.

The murder of Saudi journalist Jamal Khashoggi last year and the ongoing detention of rights activists were the main issues on the table at the press conference organised by Human Rights Watch (HRW) in Washington on Thursday.

Accusing the Saudi government of submitting dissidents to torture, harassment and smear campaigns, Amy Hawthorne, deputy director for research at Washington-based NGO Project on Middle East Democracy, stressed the need for the US to take a strong stand in defence of human rights.

“These efforts are part of [Saudi Crown Prince] Mohammed bin Salman‘s attempt to impose harsh authoritarianism, to consolidate power and to punish and inflict harm on Saudis who are working peacefully to improve and better their society,” said Hawthorne.

“These human rights abuses are bad for Saudi Arabia and they’re bad for the United States,” she said, adding that Saudi rulers “are counting on us to be silent and are counting on impunity from us”.

The gruesome killing loomed large over Thursday’s proceedings, with Hawthorne describing it as “one event in a deeply disturbing wave of violent repression against a wide range of Saudis: peaceful activists, business people, intellectuals, Saudis of all backgrounds and stripes”.

US Senator Patrick Leahy commended Khashoggi’s bravery in criticising Saudi Arabia before accusing the Saudi government of “behaving like a criminal enterprise”.

The former prosecutor compared the brutality of Khashoggi’s murder to atrocities committed by former Iraqi President Saddam Hussein, and the Islamic State of Iraq and the Levant (also known as ISIS or ISIL).

Leahy went on to highlight the case of Walid Fitaihi, a US-Saudi citizen who has been imprisoned in the kingdom for more than a year, apparently without charges or a trial.

Fitaihi, a doctor, has said he was among those held at the Ritz Carlton hotel in the Saudi capital, Riyadh, and that he was tortured.

“We are here to speak clearly, unambiguously and directly to the government of Saudi Arabia: release Dr Fitaihi now,” said Jim McGovern, a Massachusetts senator.

“We are here to put the Saudi government on notice, to let them know that we are watching and that we will not remain silent.”

During the press conference, attention was also drawn to 10 women’s rights activists, who stood trial on Wednesday.

Prasow praised the US government for passing a bill on Wednesday to halt military support to the Saudi-UAE coalition in the war in Yemen, but said more needed to be done to prevent a return to “business as usual”.

Al Jazeera’s Mike Hanna, reporting from Washington, said the fact that the press conference took place in the US Congress was a sign of the deep concerns among US politicians regarding Saudi Arabia.

“There has been a complete divide between the Congress and the Trump administration on this entire issue and, importantly, it is a bipartisan issue within Congress. It’s not just Democrats calling for action to be taken against Saudi Arabia, it is Republicans and Democrats very clearly making this a bipartisan issue,” he said.