NOVI SANZHARY, Ukraine (Reuters) – Residents of a central Ukrainian town clashed with police, burned tires and hurled projectiles at a convoy of buses carrying evacuees from China’s Hubei province, quarantined in case of the coronavirus, to a sanatorium on Thursday. 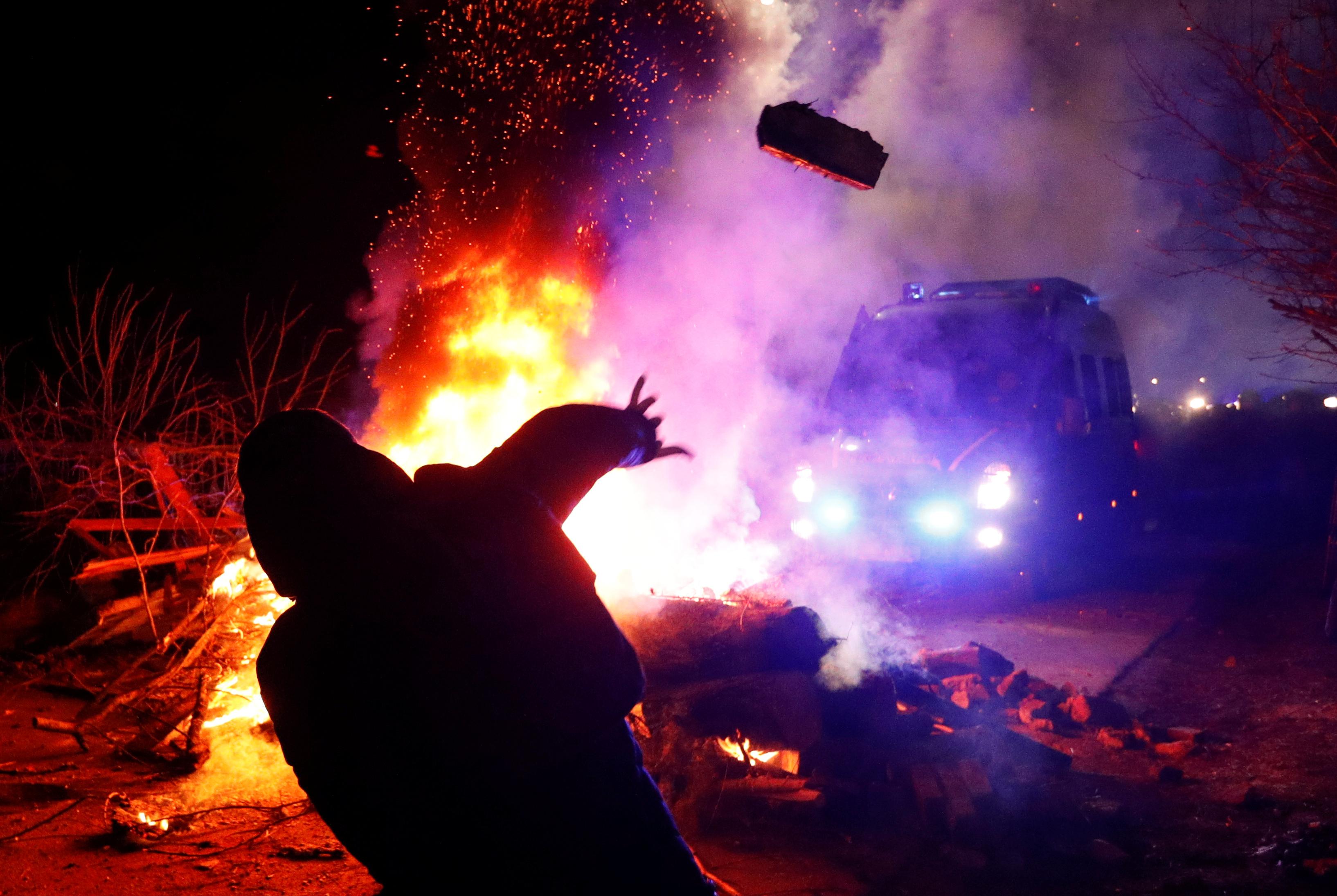 Some protesters and police were lying wounded on the ground after the clashes. At least two buses had their windows smashed while the evacuees sat behind curtains inside.

Locals in Novi Sanzhary feared they could become infected despite the authorities repeatedly insisting there was no danger and a special appeal from President Volodymyr Zelenskiy for calm.

Ukraine has no confirmed cases of the virus.

Tempers flared after a tense day-long standoff in which protesters blocked a bridge leading to the sanatorium where the evacuees will be held in quarantine for at least two weeks to make sure they are not carrying the virus.

Hundreds of helmeted police, police vans and an armored personnel carrier had been dispatched to keep order. Police were periodically shouted at with cries of “shame on you” as the town waited for the evacuees to arrive.

In addition to 45 Ukrainians, there were 27 citizens of Argentina on the plane that landed in Ukraine on Thursday, as well as citizens from the Dominican Republic, Ecuador, El Salvador, Costa Rica and other countries.

One Ukrainian woman refused to be evacuated at the last minute because she was not allowed by the Chinese authorities to take her dog, a Ukrainian embassy statement said.

The Ukrainian authorities say all passengers on board had been screened twice for the virus before being allowed to fly, but that was not enough to quell the protesters.

“Isn’t there any other place in Ukraine that can host 50 people, that is located in more or less remote villages or in far off areas where there is no threat to population?” said resident Yuriy Dzyubenko.

One protester was heard suggesting they should be kept at Chernobyl, the site of the world’s worst nuclear disaster in 1986. Another suggested taking them to parliament, while another said Zelenskiy should house them himself if he really believed there was no danger.

“This is what I am telling him, telling the president: “Take 10 people, then I will take two,” a man called Yuriy, who did not give his last name, said.

A weak healthcare system, corruption and mistrust of authority are widespread in Ukraine, which has recently also grappled with a measles epidemic amid a reluctance by some to vaccinate themselves and their children.

The protest had prompted Zelenskiy to issue a statement reassuring Ukrainians that there was no danger, that the authorities had done everything possible to make sure the virus would not spread to Ukraine. 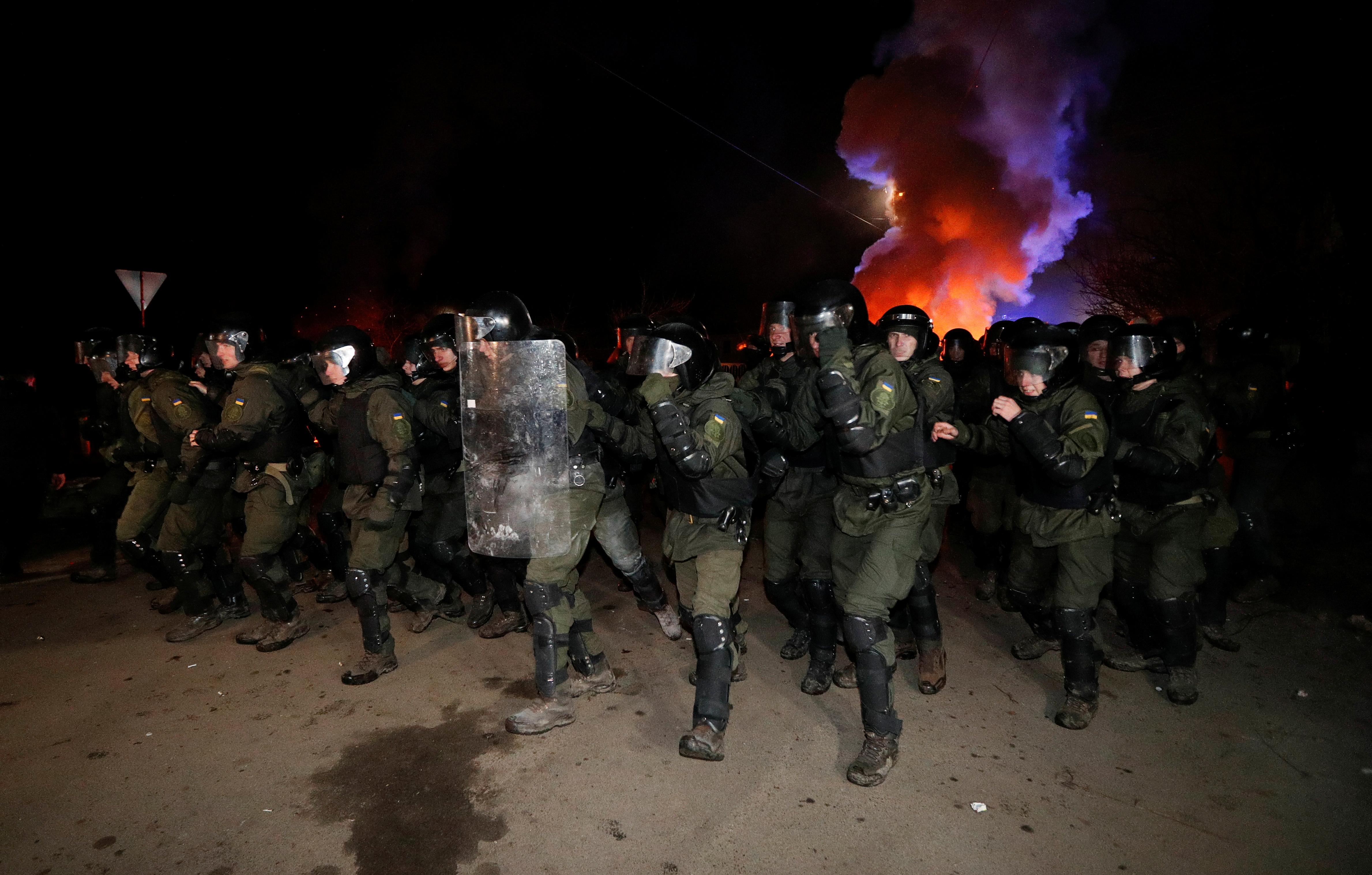 “But there is another danger that I would like to mention. The danger of forgetting that we are all human and we are all Ukrainian,” he said.

In western Ukraine there were smaller protests by residents fearing the evacuees could be housed there instead.

China reported a drop in new cases in the province at the heart of the coronavirus outbreak on Thursday, though the death toll so far at over 2,000 has made it one of the biggest global health emergencies in recent decades.