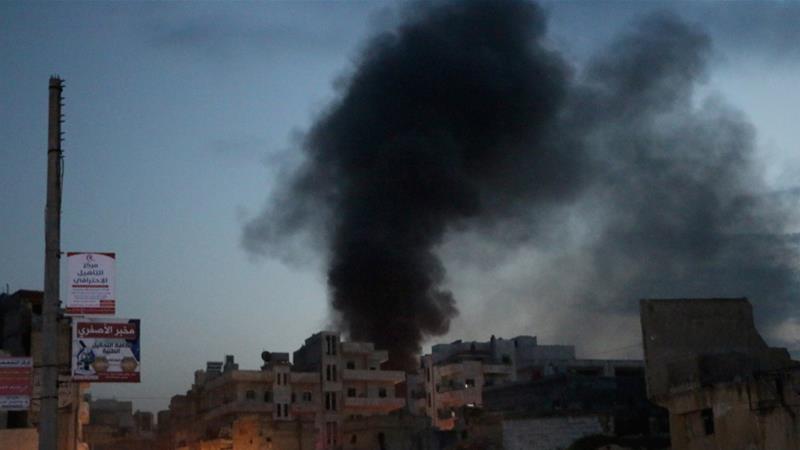 Along with artillery barrages, Russian warplanes attacked central Idlib and its rural outskirts with four air raids on Wednesday, resulting in the casualties that included eight children, the Syria Civil Defence, also known as the White Helmets, said.

The attacks, which wounded 49 civilians, targeted the al-Kaseeh neighbourhood, damaging residential buildings, according to the White Helmets, which added that a search-and-rescue operation was under way.

Government forces have stepped up attacks on the last rebel-held bastion Baghouz since January 2019, despite it being under the so-called “de-escalation zones” aimed at shoring up ceasefires.

Last September, Russia, along with Turkey – which backs opposition groups in Idlib, agreed to create a demilitarised zone that put on hold an offensive on Idlib which was dubbed “dumping ground” for evacuees who fled government offensives in other parts of the country.

The 15-to-20km-wide zone agreed upon by Ankara and Moscow was meant to allow for the “withdrawal of all radical fighters” from Idlib, Russian President Vladimir Putin said at the time, referring to HTS, who remain to be the dominant force in the province.

The last rebel-held enclave in Syria is currently home to nearly three million people, half of whom are internally displaced, and encloses what was once a major commercial highway linking Syria to Turkey and Jordan.

Civilians are bracing themselves for an offensive that humanitarian workers worry could drive millions of refugees into neighbouring Turkey, which already hosts more than three million Syrian refugees.

Syria has only just begun to emerge from a devastating conflict that began in 2011, when Syrian President Bashar al-Assad’s government cracked down on demonstrators amid a peaceful uprising.

Since the devastating conflict began in 2011, more than 450,000 Syrians have been killed and over six million displaced, according to the United Nations.