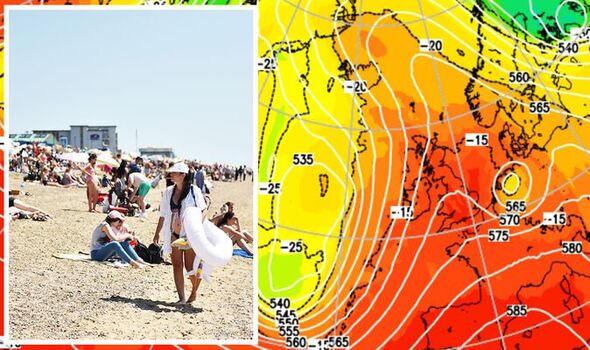 Temperatures will rocket this weekend as a plume of hot air sweeps in from the Continent. The ‘mini heatwave’ will be driven by an ‘Azores High’ weather system – also known as a ‘Bermuda High’ – stretching across the Atlantic.

The mercury is expected to rocket into the high 20Cs from Sunday with glorious sunshine and blue skies expected to hold out into through next week.

Jim Dale, meteorologist for British Weather Services, said: “This can definitely be called a mini heatwave as we are expecting a period of hot weather which will hold out for a few days at least.

“High pressure will start to build at the weekend with Sunday marking the start of the very warm weather.

“This high will be an Azores high which stretches from the sub-tropical Atlantic, and will bring warm air in from the south.

“We could see temperatures in the upper 20Cs into next week.”

While parts of the country will turn slightly cooler after next Wednesday, southern regions should hold on to the heat, he said.

Southerly gusts will arrive laden with moisture making it feel humid and muggy in parts, he added.

He said: “The main period of hot weather will last from Sunday to Tuesday or Wednesday, although some parts may hold on to warm conditions beyond then.

“It is definitely going to be the warmest spell of the year so far.”

Britons may get caught in the rain in the run up to the weekend with low pressure threatening windy downpours.

A zonal jet stream ploughing across the country towards the middle of this week threatens a more ‘disturbed’ picture in parts.

It will feel cooler as temperatures dip after the warm weekend, according to weathertrending meteorologist John Hammond.

He said: “During the middle part of the week it does look pretty disturbed.

“It is often quite blustery and we could see an area of more persistent rain zipping across central areas.

“Then we return to sunshine and blustery showers and it is feeling cool this week for many places after the early warmth.

“Looking towards next weekend and beyond there are hints that it could turn a good deal warmer.

Bookies are continuing to sharpen their axes, slashing odds on a raft of hot weather records.

Ladbrokes is offering 1-2 on the hottest day of the year before the weekend with 10-11 on a record-melting summer.

Spokesman Alex Apati said: “With temperatures back on the up, we’re strapping in for a record-breaking few weeks ahead on the weather front.”

Spokesman Harry Aitkenhead said: “It’s going to be a glorious second half to May this year and we now make the month odds on to enter the record books as the warmest fifth month of the year we have ever had.

“There is every chance we are in for a sweltering summer which could well be our hottest ever.”

Southern Britain will dodge the worst of any downpours that may hit elsewhere this week, according to Netweather’s Jo Farrow.

She said: “It will be a different week for many as high pressure slips away eastwards and a westerly Atlantic flow takes hold.

“This will bring rain and showers although southeast Britain misses most of the wet weather.

“Western areas will see more of the rain and blustery winds, and it will be a particularly wet start to the week for western Scotland.”