Brazil’s president shook hands with supporters, wearing no face mask despite its use being mandatory in the capital. 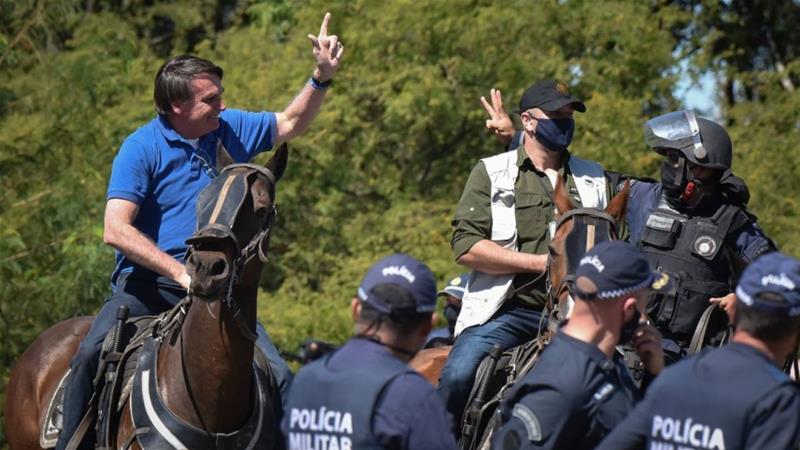 Brazilian President Jair Bolsonaro rallied supporters protesting against the Supreme Court for investigating the right-wing leader, mingling with the crowd and riding a police horse, as one of the court’s justices compared the risks to Brazil’s democracy with Hitler’s Germany.

Sunday’s rally took place in defiance of the advisory on social distancing to help contain the spread of the coronavirus that has already killed more than 29,000 people in Brazil.

Deepening a political crisis during one of the world’s worst novel coronavirus outbreaks, Bolsonaro has condemned the top court for investigating his interference in police affairs and opening an inquiry into alleged libel and intimidation campaigns run by his supporters on social media.

The former army captain and defender of Brazil’s 1964-1985 military government has denounced the investigations, suggesting “absurd orders” should not be followed and warning that the court may “plunge Brazil into a political crisis”.

Bolsonaro flew in a military helicopter over the rally in Brasilia where protesters held banners calling for shutting down Brazil’s Congress and top court, known as the STF.

One said: “Military Intervention – close Congress and the STF now.”

Supreme Court Justice Celso de Mello, who is responsible for investigating a former justice minister’s allegation that Bolsonaro tried to meddle with law enforcement for personal reasons, said the president’s supporters were seeking a military dictatorship.

“We must resist the destruction of the democratic order to avoid what happened in the Weimar Republic when Hitler, after he was elected by popular vote … did not hesitate annulling the constitution and imposing a totalitarian system in 1933,” de Mello told other judges in a message seen by Reuters.

A person familiar with the matter confirmed the authenticity of the message, which was also reported in Brazilian newspapers. De Mello’s office said the message was “exclusively personal”.

Bolsonaro has said his aims are democratic and that his opponents are trampling the Constitution in their efforts to depose him. 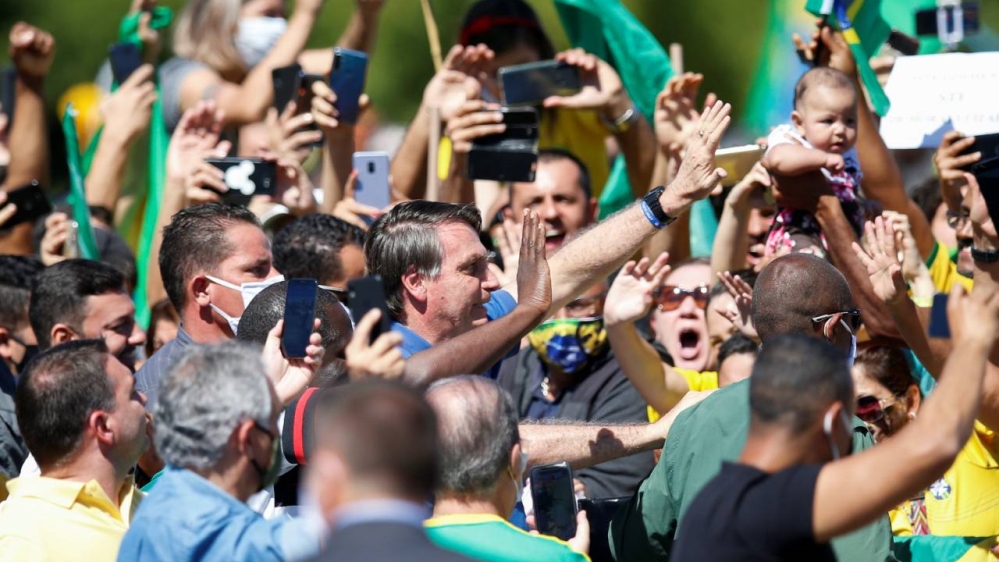 After his helicopter ride, the president walked to the rally and shook hands with supporters, wearing no face mask despite its use being mandatory in the capital to fight the coronavirus outbreak.

He then mounted a police horse and trotted past the crowd.

On Saturday night, a group of masked backers of Bolsonaro marched to the court carrying torches to call for its closure.

During Sunday’s demonstrations in Sao Paulo, opponents of Bolsonaro took to a main avenue to protest against “fascism” and clashed with riot police who intervened to stop them getting close to a rally by supporters of the president.

Police used tear gas to push back a crowd of people hurling stones.