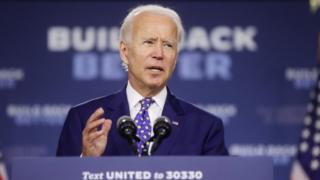 Former vice-president Joe Biden will not travel to the Democratic convention in Wisconsin to accept the party’s presidential nomination, due to the coronavirus pandemic.

Mr Biden will instead accept via a national address in Delaware, his home state.

The convention had been planned for 17 to 20 August in Milwaukee, but will now be almost entirely virtual.

Mr Biden will face Donald Trump in the US presidential election on 3 November.

President Trump said he would “probably” give his Republican presidential nomination speech live from the White House later this month.

The Democratic National Committee (DNC) said decisions about Mr Biden’s speech were made in order to protect the local community in Milwaukee, and the people involved in setting up the convention.

“From the very beginning of this pandemic, we put the health and safety of the American people first,” said DNC chairman Tom Perez.

Local Wisconsin officials are still expected to deliver speeches at the convention centre, but high-profile Democrats including Barack and Michelle Obama are expected to appear via video link. 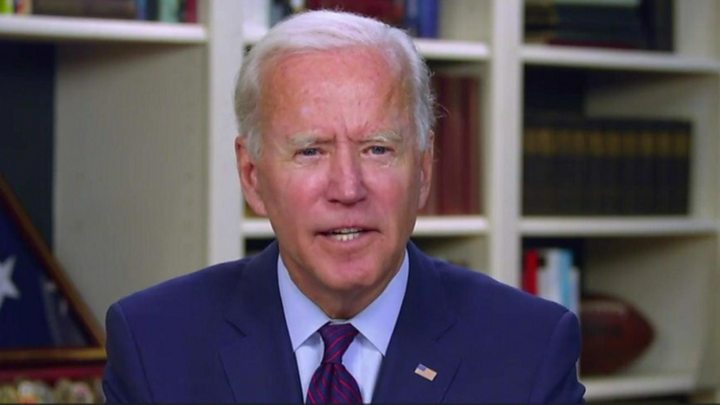 President Trump has been far more reluctant to move his convention online.

He initially planned to hold the event in North Carolina but switched to Florida because of coronavirus restrictions. Florida was then scrapped due to a surge in Covid-19 cases. The event, shortened to half a day, will now be held on 24 August in the city of Charlotte.

Speaking on Fox News on Wednesday, the president insisted that the coronavirus outbreak “will go away like things go away”.

Despite Mr Trump demanding that schools reopen fully, it has been announced that public school students in Chicago will begin the academic year remotely in September.

More than 157,000 people have lost their lives to coronavirus in the US – by far the highest death toll in the world – and deaths have been averaging more than 1,000 a day in recent weeks.