Bermuda residents are being urged to prepare to “protect life and property” ahead of the expected arrival of Hurricane Paulette on Sunday evening.

Carrying top sustained winds of 75mph (120kph), it is due to grow into a dangerous storm as it approaches the British island territory in the north Atlantic Ocean, according to the US National Hurricane Center (NHC).

Experts say swells produced by Paulette are also affecting parts of the Bahamas and the east coast of America, which could cause “life-threatening surf and rip current conditions”. 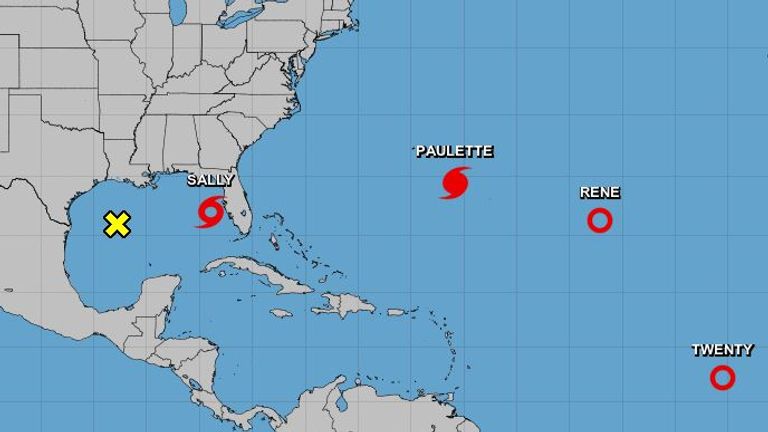 The NHC is also tracking Tropical Storm Sally, which it says strengthened off the west coast of Florida on Sunday.

It is expected to bring hurricane conditions by early Tuesday, with the threat of an “extremely dangerous and life-threatening storm surge” – when the ocean rises at the coast over normal tide levels – of up to 11ft (3.35m), and rainfall of up to 12in (30cm).

Sally is due to hit Grand Isle, Louisiana, to Ocean Springs, Mississippi, including New Orleans. It is also expected to produce flash flooding across southern and central Florida.

The storm follows Laura, which killed at least six people after rampaging across the Gulf of Mexico last month.

It grew into a Category 4 hurricane, with 150mph (240kph) winds and heavy rain, triggering a wall of sea water.