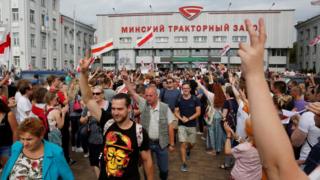 Standing outside the giant truck-making factory BelAZ, it feels like the time of the 1917 Russian Bolshevik revolution. People pass leaflets to workers through the metal bars of the factory fence. Workers organize “stachkomy” – strike committees – and “comrades” give passionate speeches inside factories calling on their colleagues to join a “zabastovka” – a strike.

These strikes became a major boost to the opposition movement in Belarus as thousands of people went onto the streets to voice their protest against what they see as rigged elections. But as workers walk off the job to show their support for protesters, many now are asking what will be next for them and for Belarus.

The opposition leaders are trying to come up with some plan. They have set up a coordination council exactly for this reason – to discuss what to do next. However, at a press conference late on Tuesday, they spent much of their time denying President Alexander Lukashenko’s accusation that they are trying to seize power.

“We use only legal ways, legal and non-violent methods,” Olga Kovalkova from the opposition candidate Svetlana Tikhanovskaya’s team said at the start of her speech. “All members of the council acknowledge that mass violations took place during the election campaign and the vote counting, they do not recognize the official results of the election. They regard the violence used by police force as criminal and demand to release all political prisoners.”

The members of the consultation council avoided giving direct answers when they were repeatedly asked about possible steps they can consider in order to move forward.

Read more on the Belarus crisis:

This lack of clarity about what to do next could seriously undermine the opposition movement. Already there are signs suggesting that the momentum for factory strikes could be winding down. According to Sergey Dylevskiy who represents strikers of the giant Minsk tractor plant (MTZ), about 20% of workers at the plant are on strike. The rest are too afraid to leave their jobs and support the movement, he said.

Mr Korovach says that only a small fraction of over 10,000 MAZ workers went on strike on Tuesday. He says that many workers became discouraged by low turnout and now prefer not to take a risk.

In search of a leader

According to independent tut.by news network, factory workers are getting letters from ministries informing them of possible punishment for their action. “Participating in a strike or meetings that are organized without following the labour legislation, violates labour disciplines and this entails full responsibility,” the letter reads.

“We’re witnessing a unique situation when protests are decentralized and spontaneous.”, said Maria Kolesnikova, a prominent opposition figure. “I wouldn’t say that in order to continue the protests, we must have a leader.”

But without a clear leader, it is uncertain whether the opposition can mobilize the crowd.

The opposition candidate Svetlana Tikhanovskaya fled Belarus right after the vote. Her teammates say that they expect her to be back soon. Her return could put fresh energy into the protest mood and create a character people could rally behind.

During a meeting with the workers of the MTZ factory on Monday, for the first time since the protests started President Lukashenko indicated a possible scenario of his departure from power.

“You need to adopt a new constitution through a referendum and then have new elections of the president, parliament and local government,” he said. “And I will step down according to the Constitution.” He made it clear he wouldn’t do it under the pressure of street protests.

But most protesters want the president to leave immediately.

Following the biggest opposition rally in the history of independent Belarus last Sunday, thousands of protesters continue gathering in Independence Square in Minsk in the evenings. People in festive mood wave opposition flags and chant “Thank you” to those who joined the movement.

On the surface it may look as if the protests may have reached a plateau. Yet, large crowds are expected to gather at weekends. People’s anger following the violence and abuse authorities used against protesters is not going away anytime soon. It is this feeling that is fuelling these rallies.

Many here compare what’s happening in Belarus to neighbouring Ukraine’s “Maidan” – the mass protests that ousted President Viktor Yanukovich in 2014. It took several months for the protests to build up there and some suggest that this could be a path that Belarus may follow. But even the opposition says that they don’t want to have a Maidan because it’s largely associated with unrest and disturbances here.

In Belarus, people bring families to the streets, carry balloons and flowers in order to show that their movement is peaceful. However, demonstrations in Ukraine were also peaceful until authorities used force to disperse the protesters.