The hot weather is set to continue on Monday as temperatures are set to smash 30C in some areas of the South of England as Britain will once again be drenched in the heatwave sun. BBC Breakfast’s Carole Kirkwood said that much the same will be seen through the beginning of this week but warned thunderstorms are forecast towards the end of the week.

Ms Kirkwood said: “Today’s forecast for many of us will be dry there will be some sunny spells.

“It will be fresher in the north but still hot and humid in the south.

“Temperatures will be that bit lower than they were yesterday in northern areas but still high elsewhere.” 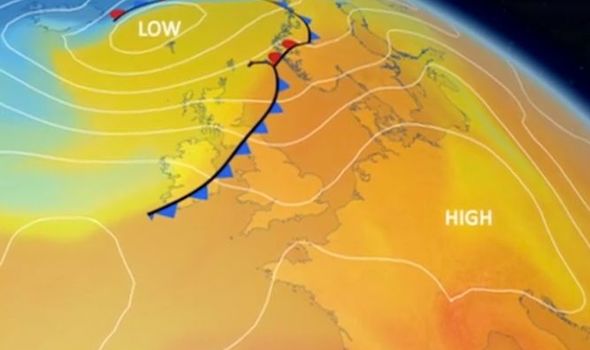 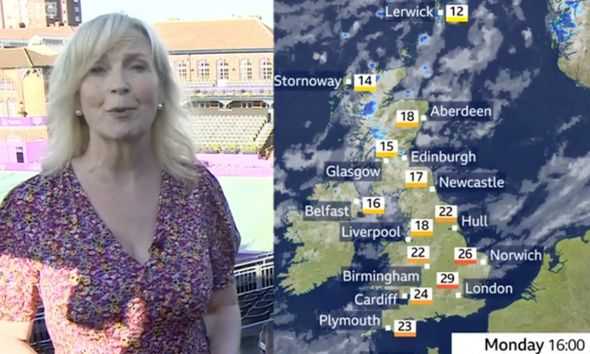 She added: “This morning we have got a weather front sinking southwards, it has produced quite a bit of rain for some through the course of the night.

“But it will continue to weaken as it sinks Southwards – behind it a brisk wind in the north of Scotland with some showers.”

Through Monday evening and overnight that weather front will “sink south” leaving “a band of cloud” in its wake. 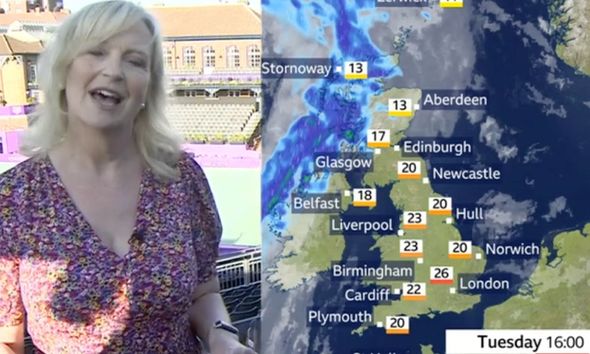 The BBC weather presenter went on to say it will be a “dry night for most of us, fresher in the north but still quite humid in the South East.

Tuesday will see “a lot of dry weather” but she warned a new weather front will make its way into Western Scotland and Northern Ireland that will bring in rain.

She added: “Temperatures up for most on Tuesday compared to today but down in the South East.”

Tuesday will see temperatures in the mid-twenties with London hitting 26 degrees, 23 in Birmingham, 23 in Liverpool, 22 in Cardiff and 20 in Newcastle. 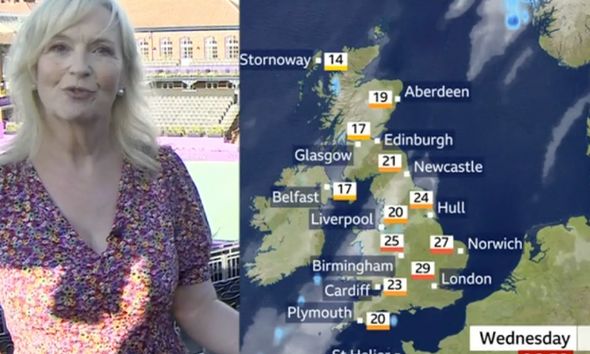 The forecaster said Wednesday will see that weather front again “slowly sinking southwards” adding if you’re under the cloud “it won’t be as hot”.

Wednesday will see temperatures climb again to 29 in London, 25 in Birmingham, 24 in Hull and 19 in Aberdeen.

But Kirkwood warned thunderstorms are on the way later in the week as Britons will see an end to the heatwave momentarily.

She explained: “Wednesday into Thursday and Friday we could well have some heavy, thundery downpours and the MET Office do have a weather warning out to this effect.”