BBC weather forecaster Carol Kirkwood warned temperatures across the country are set to drop to the mid 20s as a weather front is expected to “struggled across the UK”. The day is going to be “cloudy” and “breezy” with some rain set to “move south across Scotland into northern England and Northern Ireland”. As we head into Wednesday, high pressure is expected to build across the country, resulting in “a lot of dry weather” for the UK despite the chance of a few showers.

Ms Kirkwood said: “The forecast for today is a really cloudy one to start with.

“We’ve got some rain moving south across Scotland into northern England and Northern Ireland.

“It’s also going to be breezy. 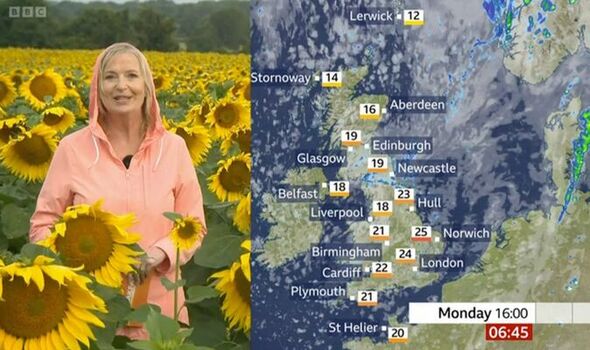 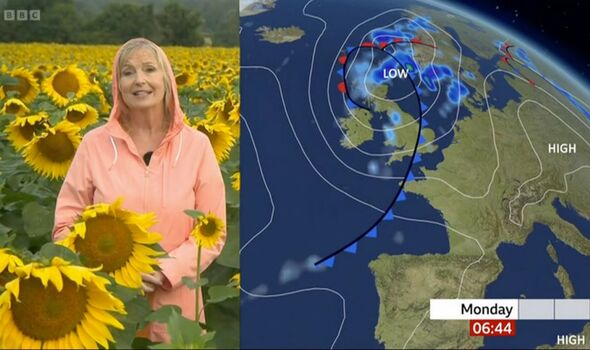 “The reason for that is you can see the weather front which is struggled across the UK.

“This morning, a cloudy but fairly mild start.

“We’ve got the rain already in Scotland, moving into Northern Ireland and eventually into northern England.

“Then, behind it, in Scotland and Northern Ireland it will brighten up.” 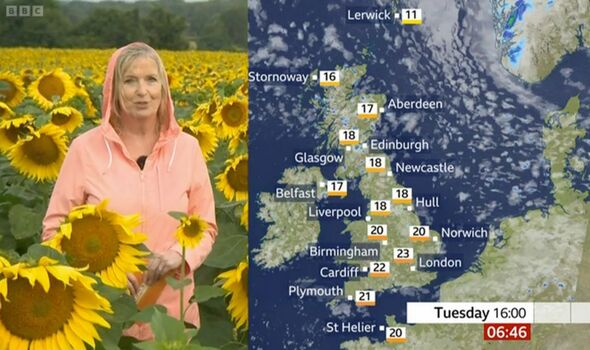 “Ahead of it we’ll see some breaks for the rest of England and Wales.

“There will also be a few showers around and it’s going to be breezy.

“Temperatures today from the mid teens to the mid 20s.

“In East Anglia yesterday we hit 32C degrees, today’s top temperatures will be about 25C.” 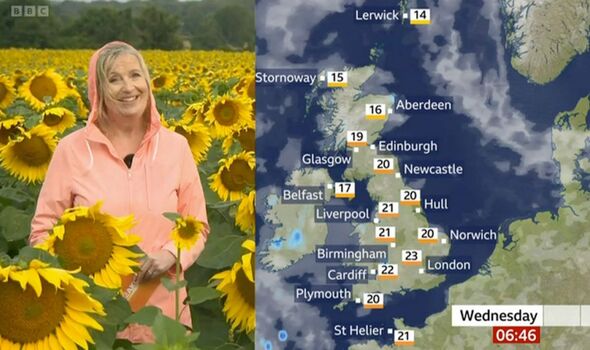 Referring to tomorrow’s weather forecast, she said: “There still will be a few showers knocking around.

“The best of the sunshine will be in the west, but we will see some sunshine coming out across parts of northern England.

“Gusty winds in Shetland, very slowly easing through the course of the day.

“Tomorrow’s top temperature is likely to be somewhere in the southeast up to about 23C degrees.”

As we head into Wednesday, she forecasted: “High pressure builds across the UK.

“There will be a lot of dry weather.

“There still will be one or two showers, so areas of cloudy at times but sunshine in between.

“Later on in the day, the cloud will start to build and as the weather front comes into the southwest that will introduce some outbreaks of rain.

“Temperatures once again generally from the high teens into the low 20s”.