BBC Weather forecaster Carol Kirkwood warned Britons are set to endure yet another day of cold temperatures with strong freezing winds battering the UK on Wednesday. As the country gets a break from the relentless rain of the past few weeks, temperatures will reach below freezing levels in some areas. The weather forecaster warned high pressure, protecting the country from more heavy showers, will only hold until the beginning of next week when a new weather front coming from the Atlantic will reach our shores.

For today’s forecast, Ms Kirkwood warned: “It’s a chilly start of the day. The forecast for today is of sunny spells, also a chilly breeze. The breeze is coming in from the north-east.

“You can see high pressure is to the north of us. We do have a weather front making its way towards the English Channel.

“First thing this morning, quite a bit of cloud around, some rain in central and southern Scotland, through the course of the day that will tend to turn more showery in nature and to some, that will actually dry up and we’ll have a few showers coming in from the east, drifting further west into central parts of England and east Wales, for example.

“Some patchy mist and shallow log, hanging onto a fair bit of cloud across parts of the south-east, East Anglia and Kent.

“Where the cloud remains broken, it will feel cold in the Highlands where we are looking at temperatures falling to about freezing.” 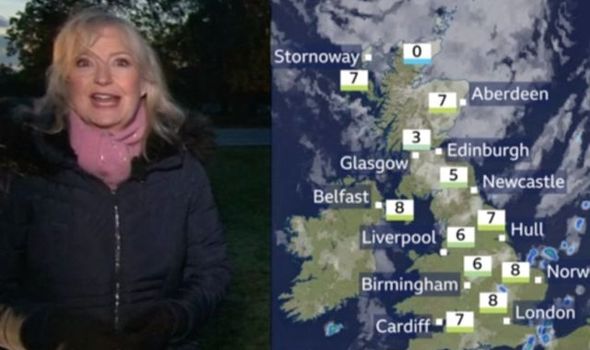 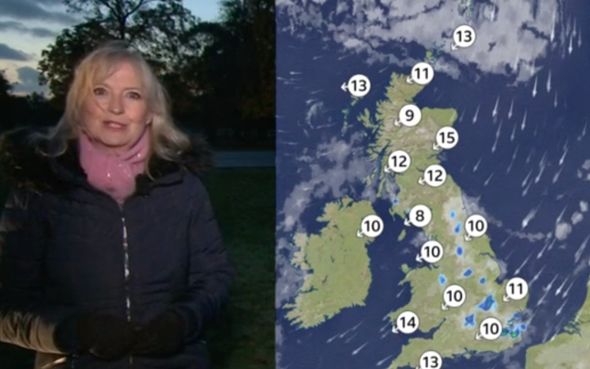 The Weather Outlook forecaster Brian Gaze also said an “early winter” is on its way, with freezing temperatures expected this month.

And these cold conditions are forecast to continue into November, with the mercury plummeting next month.

Mr Gaze said: “It looks like an early winter, with the cards stacked in favour of a cold second half of autumn due to La Niña.

“-10C is expected in Scotland and -7C in England by late November, with snow on Scottish mountains now, in northern England from early November and the South at risk from late November.”

The forecaster also cautioned snow and sleet are likely across the Scottish highlands.

The dip in temperatures is due to a climate pattern known as La Niña, bringing cooling conditions to the surface ocean waters across the Pacific Ocean.

Met Office forecaster Marco Petagna said: “La Niña is developing in the Pacific and raises the chance of early winter cold in the UK.”

La Niña and its warmer counterpart El Niño are the two phases of the El Nino-Southern Oscillation (ENSO).

ENSO is a series of linked weather and ocean-related phenomena.

La Niña occurs when there is a build-up of cooler-than-normal waters in the tropical Pacific. 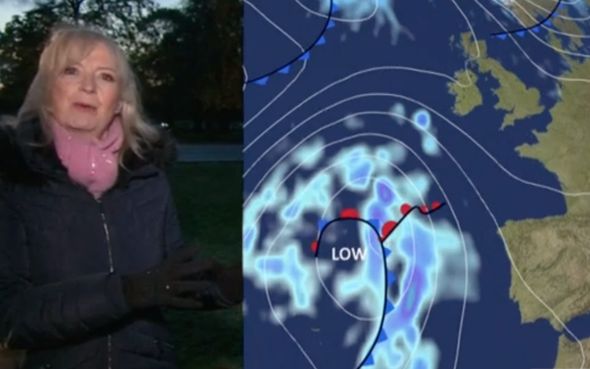 Netweather forecaster Terry Scholey explained: “A block in the eastern North Atlantic is causing depressions to dive into Europe, bringing a rather cold polar maritime airmass to our shores.

“So we’re really into autumn now, and with winds of Arctic origin likely to persist well into the coming week, you’re certainly going to need that coat or a woolly jumper.”

The oncoming cold weather can be seen on maps from WXCharts, with temperature anomaly charts turning the UK blue in the coming days.