BBC Weather meteorologist Carol Kirkwood warned Britons they are set for a very wet day as a series of rain-bearing weather fronts, including the remnants of a tropical storm, begin to make their way across the country. While the top and tail of the country are set to start off on the dry side, Northern Ireland, Wales and England will kick off the day experiencing the first round of rain through the morning and afternoon. Ms Kirkwood said: “Today’s forecast is a wet one for some of us.

“It’s already raining in Northern Ireland and, generally speaking, compared to the last few days we do have lighter winds.

“The jet stream is more or less across us at the moment, we’ve got an area of low pressure coming in from the Atlantic already producing a fair bit of rain in Northern Ireland.

“If we follow this cloud all the way back into the Atlantic, it bears several weather fronts and they are all coming our way. It’s going to remain unsettled, particularly across England and Wales for the next few days.

“There’s even an old tropical storm embedded in there as well which will bring us more humid conditions but nothing too sinister.” 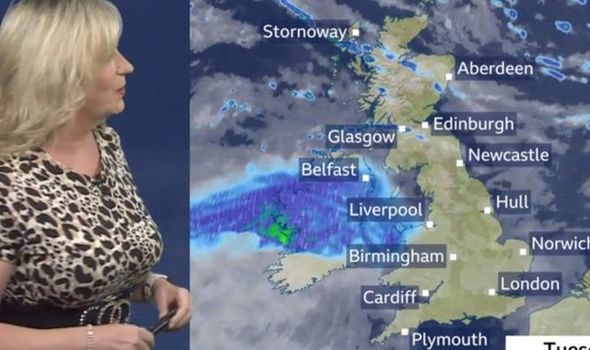 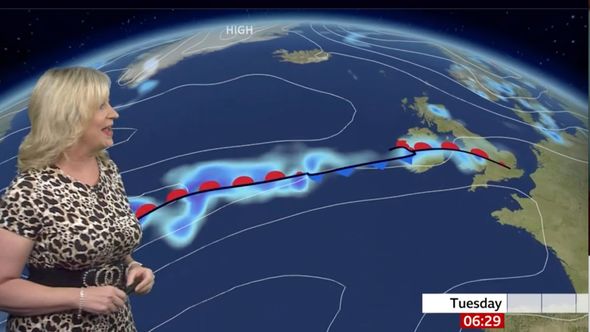 Ms Kirkwood forecast the rain system battering Northern Ireland since the early hours of Tuesday will slowly move eastwards and start unleashing rain across Wales, England, and the Midlands.

Southern England is set to escape the downpours but the BBC Weather meteorologist noted widespread cloud is likely to plague the area through the day.

Ms Kirkwood continued: “As we head through this morning, the rain already in Northern Ireland continues to push eastwards so after a dry and a relatively bright start you can see where the rain is heading, across parts of northern England, across Wales, the Midlands getting in towards Norfolk.

“South of that in southern England, there’s a fair bit of cloud. 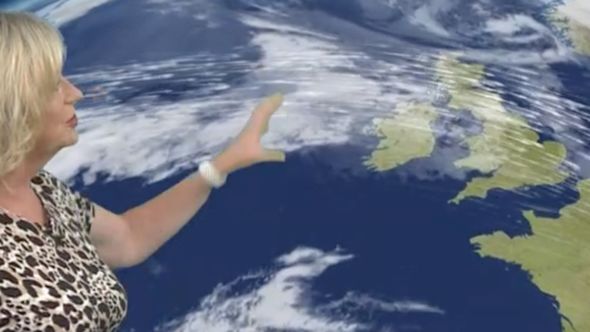 “The further you travel south, so the English Channel coastline, the Channel Islands, the more likely you are to see longer spells of sunshine.

“And north of this rain, in Scotland, we’ve got a weak system front sinking south, bringing its rain down and turning the day more showery as it does so.

“In between, there will be some sunshine but cool, 11C to about 16C in the north, as we come further south 16C to 20C, maybe 21C in any sunshine around the southeast.”

The BBC Weather meteorologist said the rain system will sink further south overnight as she warned temperatures are likely to be chillier in areas experiencing clearer skies. 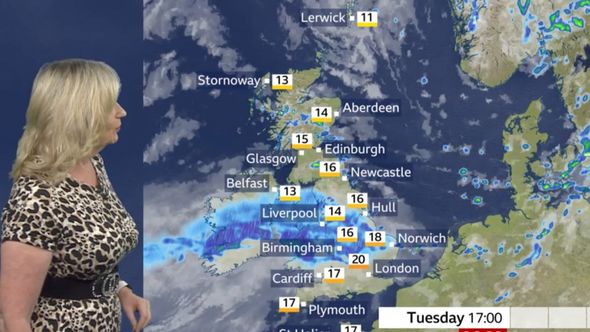 She added: “Through this evening and overnight that system sinks further south bringing its rain with it, behind it there will be some clear skies.

“There will still be one or two showers but under he clearest skies temperatures, of course, will be lower.”

However, July will soon begin to feel warmer, with Netweather forecasting high-pressure building from Friday.

This will bring drier and more settled conditions from the west, and send temperatures soaring.