BBC Weather meteorologist Carol Kirkwood warned the Environment Agency issued seven severe flood warnings across England and Wales as officials continue monitoring rising water levels after persistent rainfall at the weekend. The River Lugg, River Severn, River Trent and River Wye are currently under strict watch after Storm Dennis unleashed a deluge of water across the UK at the weekend, with more heavy rain expected to fall over the coming days. Ms Kirkwood said: “The Environment Agency has nine severe flood warnings, danger to life warnings in force across England and Wales on the River Lugg, the River Severn over Trent and the River Wye so do take extra care today.

“You can see on the satellite picture what we’ve got is some speckly cloud – those are shower clouds. But this area of cloud in the southwest is a more organised area of showers coming our way.

“We’ve had some snow and some sleet overnight on the hills, there is the risk of ice for some particularly in the higher routes but you can see quite a lot of showers.

“Some dry weather, too, it has to be said with some sunshine. But this area of cloud is moving south across England and Wales through the course of the day.”

The BBC Weather forecaster continued: “Some of that rain will be heavy – there will be some hail, some thunder and lighting in there and some gusty winds around it as well.

JUST IN: Storm Ellen WARNING: Storm Dennis to be followed by ANOTHER system? Maps and charts 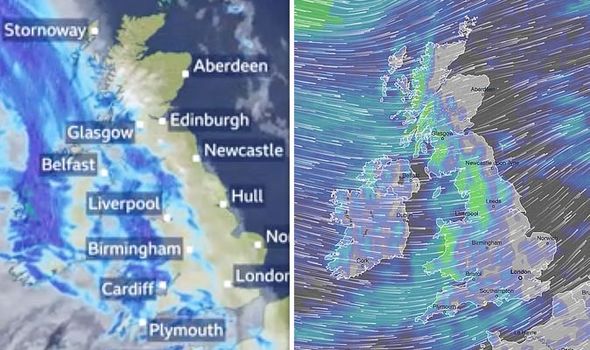 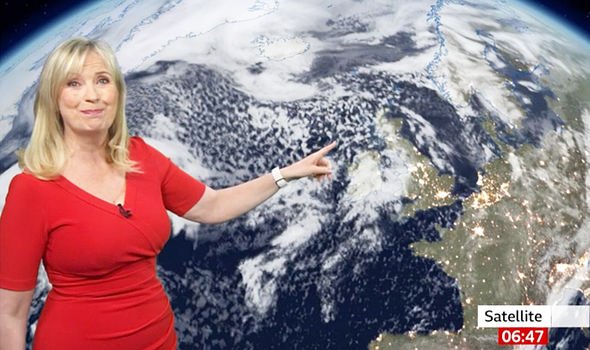 “Leading into the afternoon, we’ll see some snow on the higher routes across the north of England and also Scotland. Through this evening and overnight, we can see that line pushed down towards the southeast.

“A transient ridge of high pressure builds across us killing off a lot of the showers but there still will be some wintriness in them again on the higher routes.

“So there is the risk of ice on untreated surfaces first thing in the morning and chilly night, too.”

Two more weather fronts bearing rain are then expected to hit the UK overnight into Wednesday.

READ MORE: UK snow tracker: Where is it going to snow THIS WEEK as icy snap sets in? 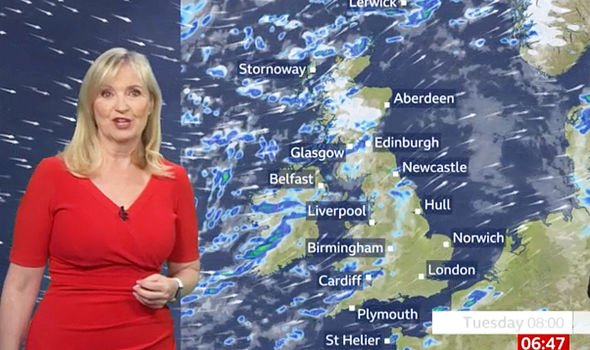 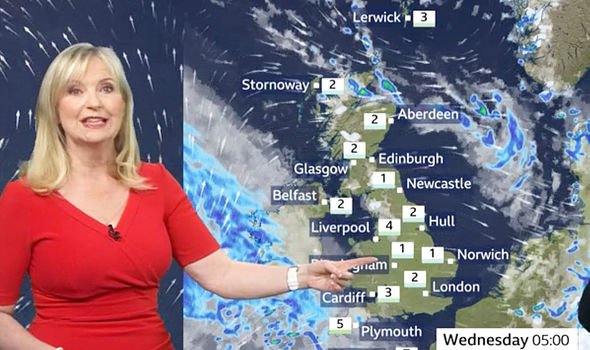 Ms Kirkwood added: “By the end of the night, the cloud will be thickening out towards the west heralding the arrival of our next system introducing some more rain.

“This is our transient ridge that will be settled in the west to get started with. Our first front comes through, it’s a warm front, warmer air behind.

“And then the second front comes through as a cold front, with colder air behind both bearing rains.”

The River Wye on Monday sparked concerns among Hereford residents after the waters from auxiliary rivers began to feed into the main watercourse, bringing levels to their record high. 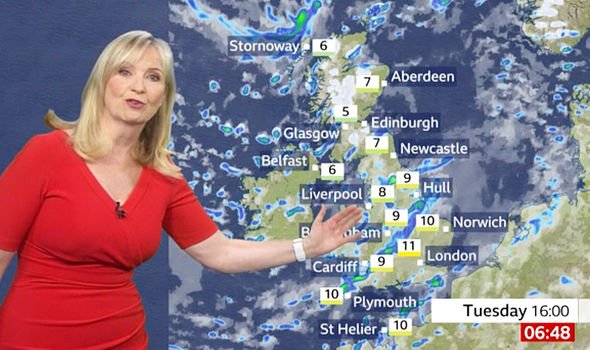 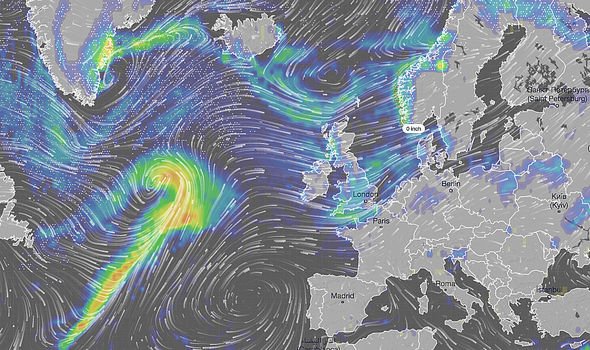 The Wye remains under strict monitoring at Blackmarstone in Hereford and at Hampton Bishop.

More than a month’s worth of rain fell at the weekend – leading to a record number 625 flood warnings and alerts in England.

The Met Office said that winds of more than 80mph were recorded across parts of the country, with the highest measuring 91mph in Aberdaron in North Wales on Saturday.

A total of 6.14 inches (156.2mm) of rain fell at Cray Reservoir in Powys in the 48 hours from Friday to Sunday morning, the Met Office added.