Many Britons will have woken up to the sound of heavy thunderstorms this morning and these will continue to hit many from London to Liverpool today, BBC Weather forecaster Matt Taylor said. He warned thunderstorms will bring large hail and gusty winds throughout the day, especially for north-western areas of the country. He said: “Thunderstorms are all going to start on the way northwards and eastwards through the day.

“Anywhere from London through towards Liverpool and more particularly across south-west Scotland, some nasty storms there, they will push the way northwards and eastwards.

“Some large hail with that, some gusty winds too.”

He added: “Note the temperatures. Down 10C for some in western parts of Wales.

“Some storms still possible this afternoon in northern England and Northern Ireland too and across parts of Scotland.

“They are bringing a change to fresher conditions.” 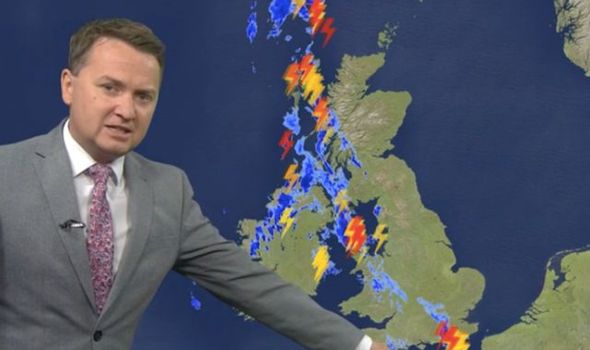 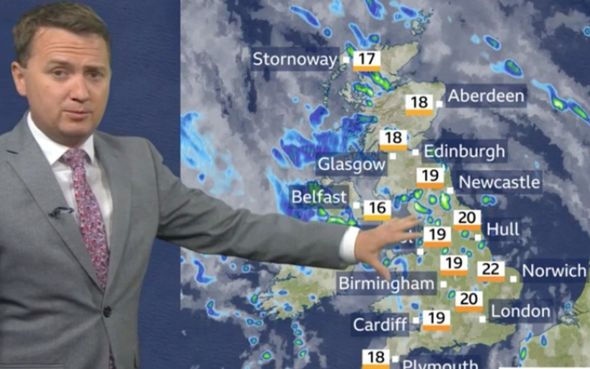 Low pressure from the Atlantic will sweep over the UK this weekend, causing thundery showers and lightning, according to the latest forecast on Weather Outlook.

It said: “The weekend is looking changeable low pressure pushes in from the Atlantic. There will be showers, especially in the north and west where more prolonged outbreaks of rain are likely.

“Cooler than recently but in the south there should be a reasonable amount of warmish sunny periods.”

In addition, there is a possibility that lightning strikes and strong winds will cause damage to some buildings.

The storms on Friday could even bring hail, while in some areas there could be up to 50mm of rain falling in an hour.

Difficult driving conditions could follow, due to sudden flooding and spray from other cars, while other transport links such as rail services may also be disrupted.

The Met Office has also warned there is a chance of power cuts that will affect homes and businesses up and down the nation.

“Heavy showers and thunderstorms are likely to break out on Friday afternoon and evening. Many places will miss the storms, but where they do occur, torrential downpours could bring 30-50mm rain in an hour, with hail and lightning,” the Met Office said.

There are two yellow thunderstorm warnings issued by the Met Office.

DON’T MISS:
Hottest summer 2020: Record breaking heat predicted [FORECAST]
POLL: Should on the spot fines be increased to stop litter scourge? [POLL]
Is it too hot to walk my dog? How to keep your dog cool in 30C heat [INSIGHT] 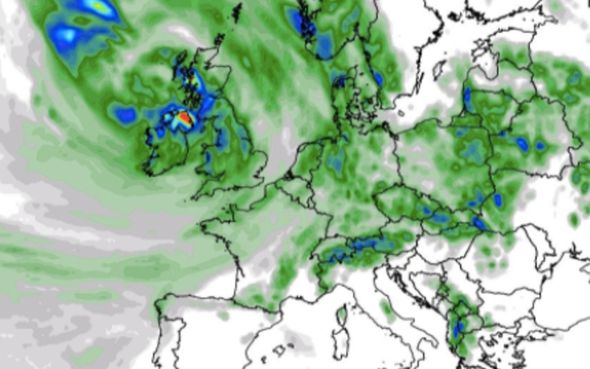 The first has been in place since 16:00 on Thursday and is in place across the whole of the UK’s west and south coast, including all of Northern Ireland. This will expire on Friday morning at 09:00.

The second one will run from midday on Friday until 09:00 in the morning on Saturday, as the storm moves from the west coast and begins to hit the central and eastern areas.

For this second warning, the far south-east of England is exempt, the Met Office said.

Met Office meteorologist Craig Snell told PA news agency: “Not everyone will see a storm, but if you catch one, you will certainly know about it”.