BBC Weather warned wind speeds could reach as high as 50mph in some areas through Tuesday amidst a day of “mixed fortunes” for the country. An area of low pressure will cause a major weather split between the north and south of the UK, with Northern Ireland and Scotland set to experience persistent rain while southern England and Waler remain mostly dry. Meteorologist Stav Danaos said: “We’ve got mixed fortunes for weather for Tuesday. It does look like low pressure moving into northern and western parts of the UK will bring quite a lot of cloud, wind and also rain.

“It’s going to be very wet for parts of Northern Ireland and parts of western Scotland through the day but it will be dry the further south and east that you are, with more sunshine that will feel warmer too.

“This is the culprit, this area of low pressure moving in from the Atlantic starting to bring the rain initially to Northern Ireland and then to Scotland.

“There’s quite a few isobars on the chart so it’s going to be pretty windy too.”

Mr Danaos continued: “Initially that rain, heavy, for Northern Ireland, pushing across the Irish Sea into the far north of England but mainly into Scotland. 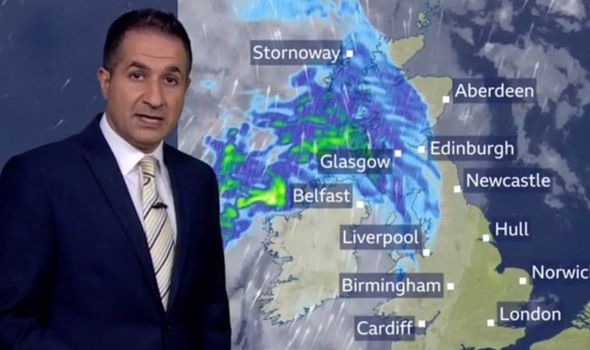 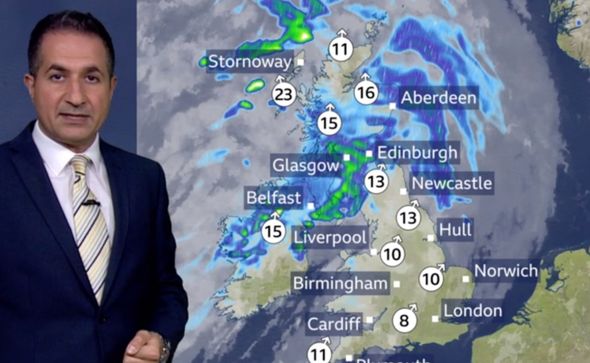 “And it’s western Scotland, the western islands which are going to see the rain really piling up by the end of the day.

“A windy day to come as well, 40mph maybe 50mph gusts across the northwest.

“A breezy day further south but the further south that you are, the better chances of you staying dry, seeing the sunshine and feeling warmer, 23C-24C. A bit disappointing further north, mid to upper teens.”

The BBC Weather meteorologist said temperatures are expected to rise further overnight thanks to a plume of heat being pulled in from the Azores. 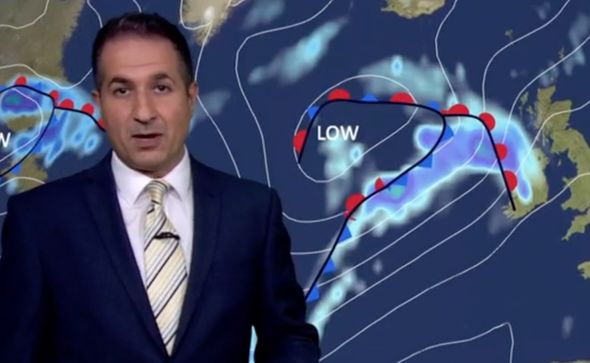 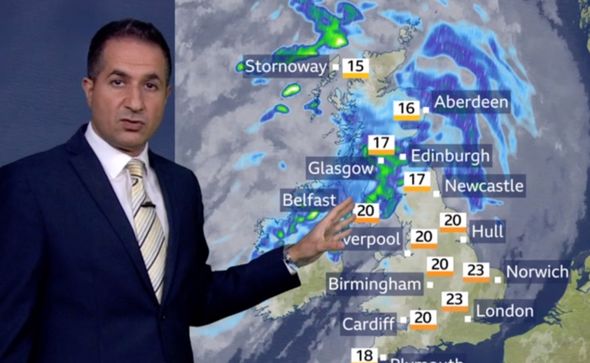 He said: “Through Tuesday night that right begins to slip its way south touching much of northern England into north Wales as well.

“There’ll be further spots of rain for the north, drier across the southern areas. We’ll start to import a milder, more humid air mass from the southwest so temperatures won’t fall much below 15C through Tuesday night.”

Wednesday will continue to contribute to building up the scorching heatwave expected to hit across the UK from Friday.

Mr Danaos added: “Into Wednesday we’ve still got this area of low pressure and the weather front. 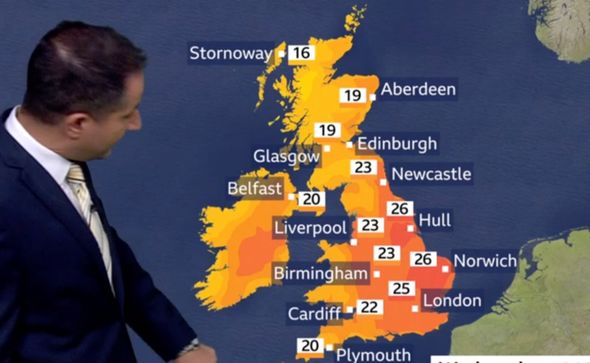 “Again, it’s going to be a breezy day, there’ll be a lot of cloud, mist and murk across northern and western areas.

“We’ll also see some rain starting to push its way into Wales and western parts of England but agin, the further south and east that you are, although breezy, is going to be dry with increasing amounts of sunshine.

The Met Office issued a Level 2 heat warning for the southeast of England later this week as forecaster expect the mercury to reach 36C in some areas.

A spokesman said: “There is a 60 % probability of Heat-Health criteria being met between 1200 on Thursday and 0900 on Sunday in parts of England.

“A spell of hot and sunny weather is likely to develop through Thursday and Friday with temperatures most likely peaking on Friday in southeast England.

“The heat may continue for some on Saturday but there is currently low confidence for the longevity of this expected hot spell.”