The latest BBC weather forecast showed temperatures across the UK continue to surge past this weekend and into next week. Temperatures will comfortably sit at 23C to 25C today for much of the country, and the heatwave will get even hotter by Monday. However, the BBC’s meteorologists Helen Willetts warned that the lengthy spells of warm sunshine will be interrupted at times by slow-moving torrential rain showers and large hail.

Willets told BBC Breakfast viewers that temperatures will stay as high as 24C in the north-west and the Scottish Highlands today, and as high as 25C in southern England.

She added: “It will all feel quite warm. We are not too far away from the longest day of the year.

“However, we do still have an area of low pressure that is refusing to move the clouds and showers.

“When those showers come along on Sunday, Monday, Tuesday or Wednesday, they will be slow moving.”

JUST IN: US heatwave forecast: Intense heatwave expected ahead of next weekend 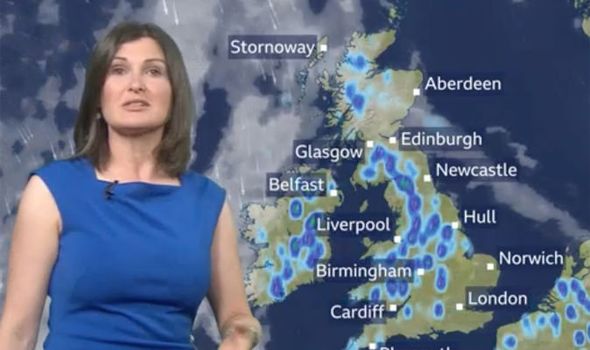 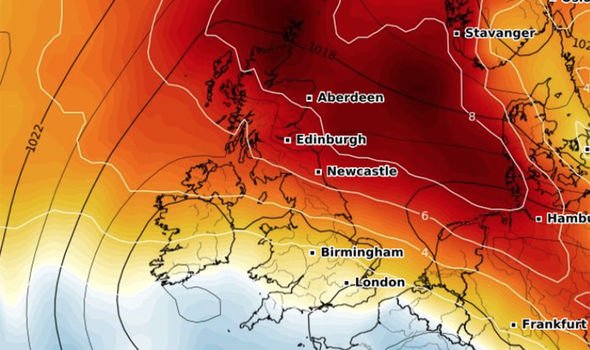 She continued: “There will be frequent lightning with them, quite large hail and locally some very strong winds.

“Tomorrow, on Monday, that low cloud will be with us on the east coast. By Tuesday, we could start to see some of the high pressure start to shifting in from the Atlantic.

“That will give us even more widespread showers potentially.

“But in between these showers there will be lengthy spells of sunshine, and that will be quite warm. 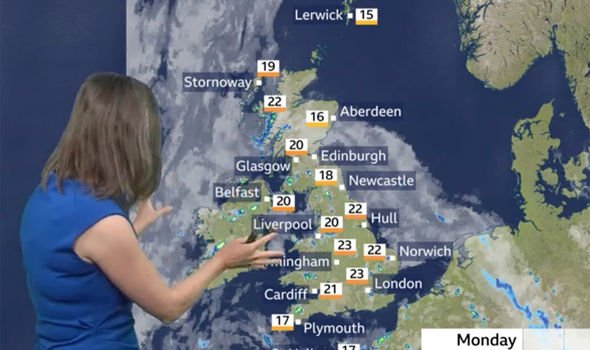 “Next week will be comfortably in the low 20s for many of us, unless you are caught in one of those showers.

“Overall, very little movement in our weather over the next few days, but there could be some significant downpours and thunderstorms.”

The latest forecast follows a two-week forecast that shows Britain experiencing temperatures nearing 30C by the end of June. 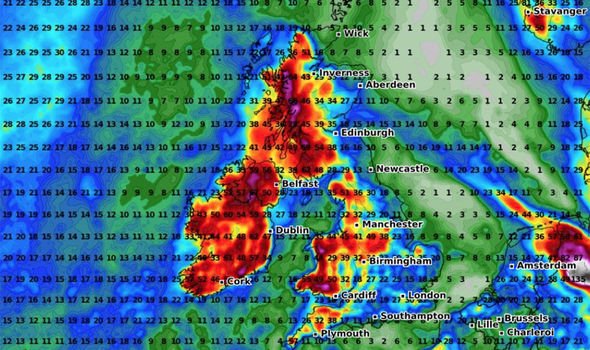 The beginning of this month has seen the UK drenched with heavy downpours and strong winds.

However, the warm weather that arrived on Saturday looks set to continue for the rest of the month, as a jet stream and bout of low pressure moves away from the UK.

Charts from forecasters WXCharts shows much of the UK turn red today as the mercury rises to highs of 24C.

Netweather also indicate the UK can expect scorching temperatures from this Monday, with temperatures reaching 26C, as the south east and the midlands see the best of the warm weather.