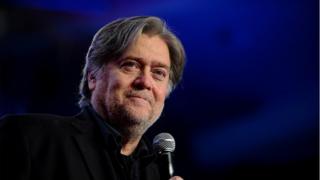 Former Trump adviser Steve Bannon has been arrested and charged with fraud over a fundraising campaign to build a wall on the US-Mexico border.

Mr Bannon and three others defrauded hundreds of thousands of donors in connection with the “We Build the Wall” campaign, which raised $25m (£19m), the US Department of Justice (DoJ) said.

Mr Bannon received more than $1m, at least some of which he used to cover personal expenses, the DoJ said.

He is due to appear in court later.

The “We build the wall” campaign pledged to use donations to build segments of the border barrier – whose construction was a key Trump promise during the 2016 election – on private land.

But Audrey Strauss, the Acting US Attorney for the Southern District of New York (SDNY), said Mr Bannon, Brian Kolfage, Andrew Badolato and Timothy Shea had “defrauded hundreds of thousands of donors, capitalising on their interest in funding a border wall to raise millions of dollars, under the false pretence that all of that money would be spent on construction”.

Mr Bannon had received more than $1m through a non-profit organisation he controlled, at least some of which he used to cover “hundreds of thousands of dollars in Bannon’s personal expenses”, the DoJ said.

Meanwhile, Mr Kolfage – founder of “We Build the Wall” – covertly took $350,000 for his personal use, the statement said.

“While repeatedly assuring donors that Brian Kolfage, the founder and public face of We Build the Wall, would not be paid a cent, the defendants secretly schemed to pass hundreds of thousands of dollars to Kolfage, which he used to fund his lavish lifestyle,” Ms Strauss said.

SDNY Inspector-in-Charge Philip R Bartlett said the four created “sham invoices and accounts to launder donations and cover up their crimes, showing no regard for the law or the truth”.

“This case should serve as a warning to other fraudsters that no one is above the law, not even a disabled war veteran or a millionaire political strategist,” he said.

Mr Bannon and the three others launched the scheme in December 2018. the DoJ said, and during the campaign Mr Kolfage said that all of the money donated would go towards construction while Mr Bannon publicly said, “We’re a volunteer organisation”.

The line between legitimate online political fundraising and swindling is sometimes a fine one. Federal prosecutors are now alleging that Steve Bannon, a former top political advisor for Donald Trump, crossed it.

Mr Bannon was one of those fringe figures who rode Trump’s improbable rise to the presidency to national prominence. His time in actual power at the White House was short-lived, however.

Donald Trump reportedly resented news reports painting Mr Bannon as the “brains” behind the president – a perception boosted by Mr Bannon’s willingness to talk with the press.

Since then he mostly has been confined to advocating for the president from the sidelines – and participating in sometimes questionable side projects like this wall foundation.

That this indictment comes out of the Southern District of New York, the federal prosecutorial office that has handled other high-profile cases involving Trump associates, will stir greater interest in the indictment. The district was itself the source of recent controversy when Attorney General Bill Barr abruptly fired its head, Geoffrey Berman.

After criticism, Mr Barr was forced to abandon his choice for a temporary replacement, and Mr Berman’s top deputy moved into the job, instead.

It was this woman, Audrey Strauss, who announced Mr Bannon’s indictment.

Who is Steve Bannon?

The former investment banker was the driving force behind the right-wing Breitbart News website before serving in the Trump White House as chief strategist. His influence was discernible in key decisions such as the mid-2017 US withdrawal from the Paris climate agreement.

He left the post in August 2017 and returned to Breitbart, but was again forced to step down after criticising Mr Trump’s decisions, prompting Mr Trump to say “Steve Bannon has nothing to do with me or my presidency. When he was fired, he not only lost his job, he lost his mind”.

Mr Bannon has since expressed support for the idea of a right-wing supergroup of populist parties in Europe and his presence at events has become controversial, with the New Yorker magazine dropping him from a festival, Scottish First Minister Nicola Sturgeon pulling out of an event co-hosted by the BBC at which he appeared, and a further appearance at Oxford University Union that attracted protests.

Last year he told the BBC that the “turmoil” from Brexit was “only just beginning” and argued that the border wall between the US and Mexico would help black and Hispanic communities.

What is happening with the border wall?

The wall with Mexico is perhaps Donald Trump’s most memorable signature promise during his 2016 election campaign.

He said he would build it, and Mexico would pay for it.

Before Mr Trump took office, there were 654 miles (just over 1,000km) of barrier along the southern border. He promised to build a wall along the border’s entire 2,000-mile length. Later, he said it would only cover half of that – with nature, such as mountains and rivers, helping to take care of the rest.

The money has come from previous funding approved by Congress, as well as extra cash Mr Trump has been able to access since he declared a state of emergency in February 2019 amid a spike in the number of migrants entering the US.

He has gained access to defence funds, but is still short of the original estimate of up to $12bn which, in turn, is far shorter than much higher estimates that include construction consultants and others.

Mr Trump has also changed his view of what constitutes a wall. 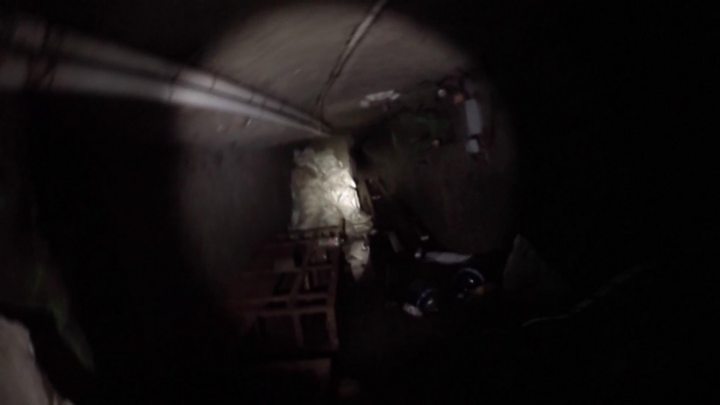 Initially he talked about concrete – but, once elected, he started advocating a barrier made of steel.

The new system will be made of what the US Customs and Borders Protection (CBP) describes as a combination of “steel-bollard barrier, all-weather roads, lighting, enforcement cameras and other related technology”.