Major flooding threatens thousands of homes in Queensland as authorities open up dam gates after days of heavy rains. 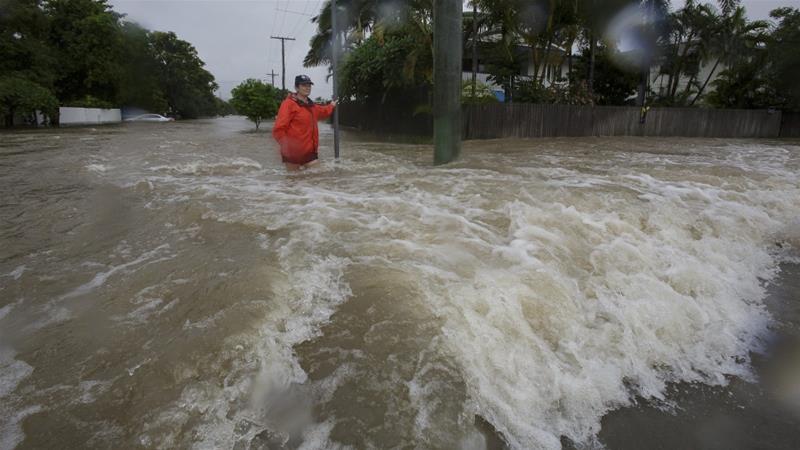 Australia has deployed troops to tackle “once-in-a-century” floods that have inundated houses, schools and airports in the country’s northeast, forcing hundreds to flee and bringing crocodiles onto the streets.

The weather bureau warned of “dangerous and high velocity flows” along the Ross River after the floodgates were opened fully at the Ross River dam late on Sunday, releasing about 1,900 cubic metres of water a second.

Even after the release, as of Monday morning, the dam was still at 229 percent capacity, holding about 532,000 gigalitres of water, or roughly as much as Sydney Harbour.

‘Never seen so much water’

More than 1,100 people have called the emergency services for urgent help, according to Annastacia Palaszczuk, the state premier.

Schools and courts remain closed, more rain is on the way and emergency warnings are still in effect for more than a dozen rivers, with winds expected to gust at up to 100km an hour on the coast.

Up to 20,000 homes are at risk of being inundated if the rains continue, according to officials.

“It’s basically not just a one-in-20-year event, it’s a one-in-100-year event,” said Palaszczuk. “This is unprecedented, we’ve never seen anything like this before,” she said.

“We’ve never seen so much water in our lives,” said local radio journalist Gabi Elgood. “You think there can’t possibly be any more to come but the rain just doesn’t stop.”

Desperate residents had to contend not only with flash flooding, landslides and power blackouts, but also reptilian predators that have been spotted in residential roads and cul-de-sacs.

There were several saltwater crocodile sightings in the flood-ravaged Townsville area.

A major port for northern Australia, Townsville is the country’s top exporter of copper, zinc, lead and sugar. Its port remains open, but cargo loadings have faced interruptions due to heavy rain, a port spokeswoman said.

Emergency services have struggled to respond to the scale of the disaster, carrying out 18 “swift water rescues” overnight.

Around 400 Townsville residents have sought shelter at nearby Lavarak military barracks and the Red Cross is also assisting with the response and recovery effort.

Ergon Energy’s spokesperson Emma Oliveri told the AFP news agency that more than 16,000 people had no power supplies and they were unable to say when the lights would come back on.

The town of Ingham, just north of Townsville, got over 100mm of rain in just a few hours on Monday morning, according to the bureau of meteorology.

A year’s worth of rain

The bureau of meteorology’s Adam Blazak told AFP the downpours could continue until Thursday, while floodwaters would take some time to recede even when the rains lessened.

Some areas are expected to get a year’s worth of rain in just over a week.

The region receives an average of about 2,000mm of rain annually, but some towns are already on track to pass that.

“I’ve never seen anything like this,” Townsville resident Chris Brookehouse told national broadcaster ABC, adding that his house was flooded with water more than one metre deep.

“The volume of water is just incredible. Downstairs is gone, the fridge and freezer are floating. Another five or six steps and upstairs is gone too.”

Blazak said that with adverse weather predicted to continue for up to 72 hours, some regions could see record-breaking levels of rainfall.

A silver lining to the deluge is that it has boosted drought-stricken farmers in western Queensland.

The downpours come amid a severe drought that has left graziers struggling to keep in business.