At least 36 states have made some members of the clergy eligible for a vaccine before the rest of the population, according to a New York Times survey.

The vaccines come at a critical time: As religious leaders continue to work on the front lines of the pandemic in hospitals, mortuaries and long-term care facilities, many are now working with health officials to help combat vaccine hesitancy in their communities.

In Utah, mosques are sharing videos on social media of imams receiving the vaccine. In Michigan, a rabbi is weaving messages of support for vaccination into his sermons and conversations with his congregation. And at the Washington National Cathedral this month, Dr. Anthony S. Fauci, the nation’s leading infectious-disease specialist, and other health officials joined 25 faith leaders from across the D.C. region as they received their vaccines on camera.

“Religious figures are among the most trusted leaders, so seeing congregation leaders get vaccinated first can relieve anxiety and fears,” Melissa Rogers, the executive director of the White House Office of Faith-Based and Neighborhood Partnerships, said during the vaccination event in Washington.

Many states have prioritized all clergy members for the vaccine, while at least 17 have expanded eligibility to religious leaders who work only in hospitals or other health care settings. In some other states, all adults are already eligible.

Rabbi Mark Miller of Temple Beth El in Bloomfield Hills, Mich., who continued to preside over funerals during the pandemic, was vaccinated in January.

“With everything that went on in the country over the last year, one of the things that didn’t stop, and couldn’t stop, was funerals,” said Rabbi Miller, who has urged his congregants to get the vaccine when they become eligible.

In some places, religious leaders have pushed to become eligible because their work can place them at higher risk of contracting the virus. Bishop Daniel G. P. Gutiérrez of the Episcopal Diocese of Pennsylvania said he and other faith leaders started calling elected officials in December to ensure that clergy members would be vaccinated with other frontline workers. Though clergy members in most of Pennsylvania are still not eligible for the vaccine, the state has moved them into an earlier priority group than it had originally planned.

“People don’t recognize the 24-hour, seven-day-a-week ministry of a clergy,” Bishop Gutiérrez said. “Once we brought that to their attention, almost all said: ‘You’re right. Let’s do this.’”

Officials with the Utah Muslim Civic League, which has hosted vaccination events at mosques, said registration numbers had been growing. And in Washington, after the Rev. Patricia Hailes Fears of Fellowship Baptist Church became the first clergy member to receive the vaccine at the event with Dr. Fauci, some congregants took notice.

“I wasn’t even home from the cathedral, and I was getting phone calls from members of the congregation saying, ‘Pastor, we saw you! I’m getting my shot on Saturday,’” she said.

Across the country, public health officials have reached out to religious leaders in Black and Hispanic communities, which have sometimes reported significantly lower vaccination rates compared with their representation in the general population.

In Baltimore, the Rev. Terris King of Liberty Grace Church of God has set up virtual discussions for members of his predominantly Black congregation with representatives from health care companies, such as Pfizer. Governments need to work with churches, the reverend said, because religious leaders understand their communities’ needs and anxieties, with much of the mistrust stemming from historical and current mistreatment of people of color in the health care system.

“Many of them have seen what, as a researcher in minority health, I’ve always known, and that’s that the church is the trusted source in the African-American community around the country,” he said. 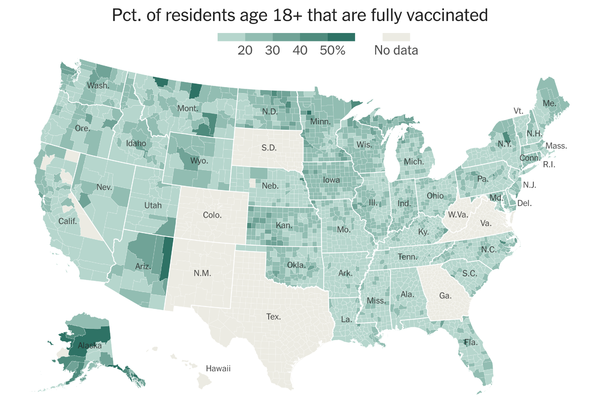 See where doses have gone, and who is eligible for a shot in each state.