Groups document surge in number of Venezuelans crossing into Colombia in January, with locals ramping up efforts to help 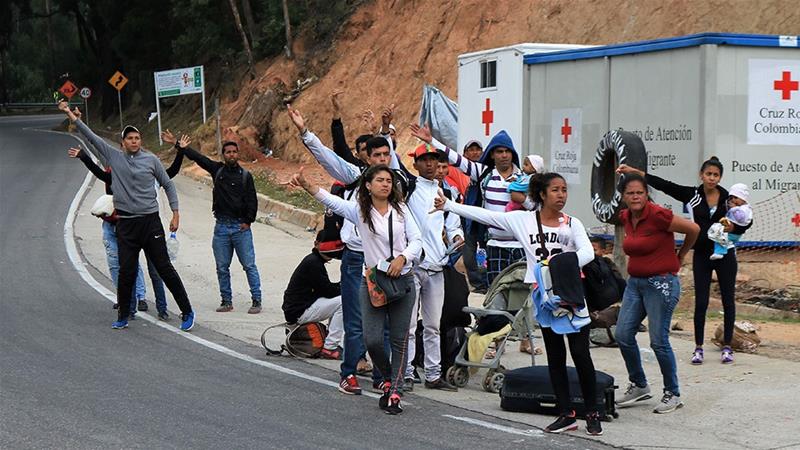 Pamplona, Colombia – Up to 50 Venezuelans sleep in what used to be 55-year-old Marta Duke’s dining room every night. Forty sleep in her former living room; more in what was once her son’s bedroom.

Scores more sleep at the neighbour’s house, and 200 more sleep outside in this chilly mountain town 75km from the Venezuelan border.

“In the new year, the quantity has exploded,” said Duke, rubbing her tired eyes in the kitchen of her house-turned-migrant shelter. “I’m worried.”

Aid workers and volunteers throughout the border zone agree that the number of Venezuelans hiking into Colombia has surged in recent weeks.

As the new arrivals continue to mount, the humanitarian crisis zone once confined to the Venezuelan border is pushing deeper into Colombia. 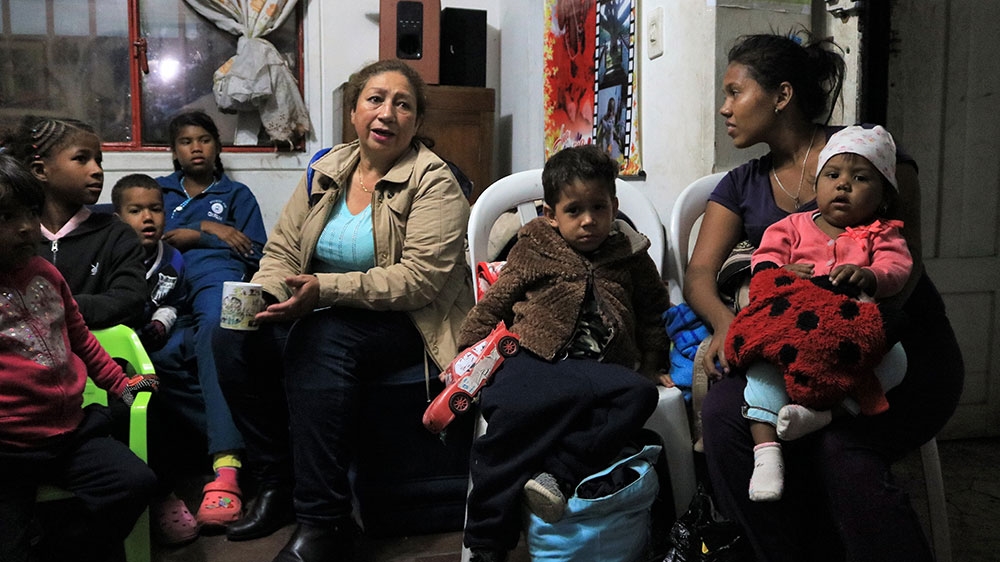 ‘No one expected this’

Late last year, places like Pamplona saw a steady trickle of Venezuelans walking through. Now, hundreds of people camp in the streets each night. The next day, they leave and more arrive.

“I don’t think anyone expected it to be like this,” said Eric Huxley, Colombia country director for the aid group Samaritan’s Purse, who has lived near the Venezuelan border since September.

No one knows exactly how Venezuelans are arriving. Figures from Colombia’s migration authority do not add up to the spike reported by shelters throughout the zone, suggesting more people are using routes between official ports of entry and arriving undocumented.

One shelter counted about 1,200 migrants passing through in one day this month, nearly twice what they counted weekly in early December. Duke also estimated that far more than 1,000 Venezuelans pass by her home each day, with almost 300 sleeping there each night. 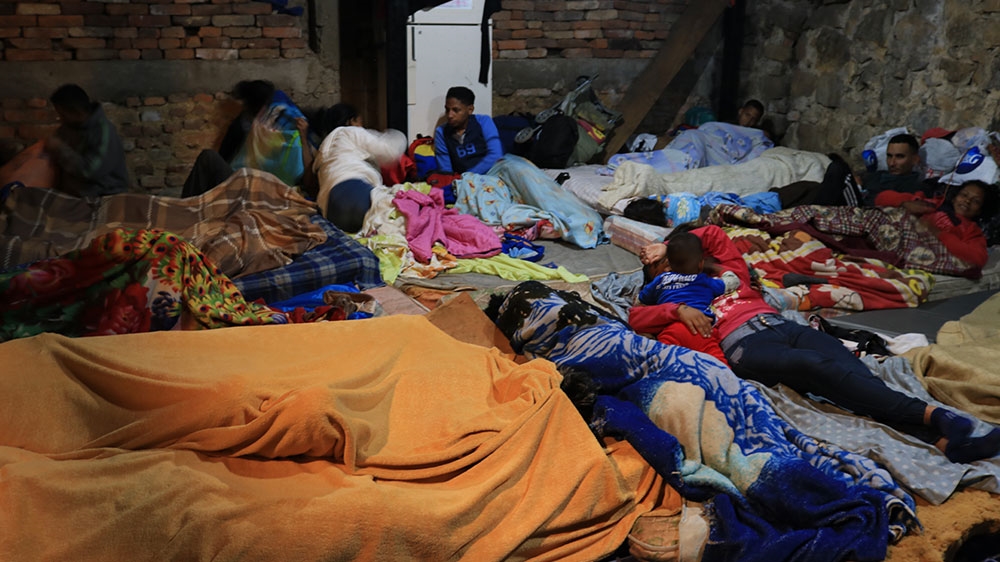 Duke, a self-described social activist, opened her doors to the migrants one year ago, when she started to notice groups building fires to cook and camp at the entrance to Pamplona. Up to 10 people used to sleep in her house back then. Now, she runs her shelter full time while her husband works as an electrical repairman.

Every day she makes a soup with potatoes, rice, herbs and sometimes, bones.

“As long as God gives me the strength and energy to do this, I will,” she said, “It’s just sad to see so many people, children, hungry.”

No one knows exactly why the numbers of arriving migrants have jumped in the New Year. Venezuelans seldom say it has much to do with the fresh political upheaval at home. Many countries including the United States have recognised opposition leader, Juan Guaido, as the nation’s interim president, casting uncertainty on the future of the government of President Nicolas Maduro, who still enjoys the support of the highest ranks of Venezuela’s military, Turkey, Russia and China.

The border area is set to become the next front line of the crisis, with the US reportedly planning to send food and medical supplies to Cucuta, the main Colombian-Venezuelan border crossing, where it will stay until it is allowed into the country. Maduro maintains that the US, along with other international powers, of trying to overthrow the country’s “legitimate government”.

Many migrants say they’re only marginally aware of the upheaval at home, as events are not covered by state TV broadcasters and the people remain more focused on daily survival.

Many say the spike in migration is related to the Christmas holiday. After an austere season of sentimental family time, many concluded they were ready to leave home behind. 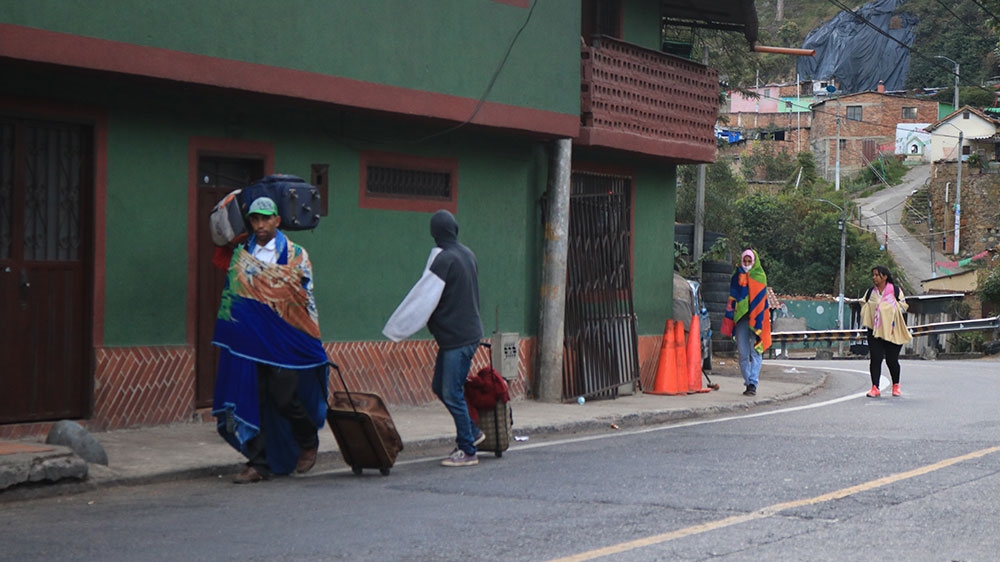 “We practically didn’t have a Christmas this year,” said Marena Castillo, lamenting the lack of their traditional dinner. “I couldn’t get my children anything. After that, I knew it was time to go.”

Also contributing to the spike: more migrants are bringing their families.

One of them is Eliomal Flores, who is making his second trip across Colombia. The first was in May of last year. He left behind his wife and two kids in Valencia to try and earn some money and find some stability before bringing them along.

He walked and hitchhiked alone to Bogota, where he paid about three dollars a night to sleep on a crowded floor with about 20 other Venezuelans. By day he sold candies on the street. After six months he was able to save about 100,000 Colombian pesos, about $32.

On December 18, he set out for home and spent some of what he had saved on Christmas for his children. Then, in early January, the family together locked up their house and walked away, unsure they would ever return.

Flores said he would save the money for emergency situations. So far, the family has been able to eat only donated food.

“The Colombians have been very generous with us,” he said.

More than three million people have fled Venezuela, and more than a million of them have settled in Colombia, a number which Colombian officials estimate could quadruple in the year to come.

All along this part of the migration route, locals have taken it upon themselves to mount a grassroots humanitarian response.

One of them is Alonso Cardazo, 46, who farms peaches. Cardazo often drives his Toyota truck down the highway leading away from the border, stopping at each group of walking Venezuelans he found to distribute tamales, a typical Colombian food of rice and chicken cooked in a banana leaf.

He said he hands out between 30 and 40 tamales, which he buys at a shop in his local town, about three times a week. Typically it takes less than half an hour to distribute everything he has.

“I have no reason not to help them,” he said, sitting in his truck. “Just look. They need help.” 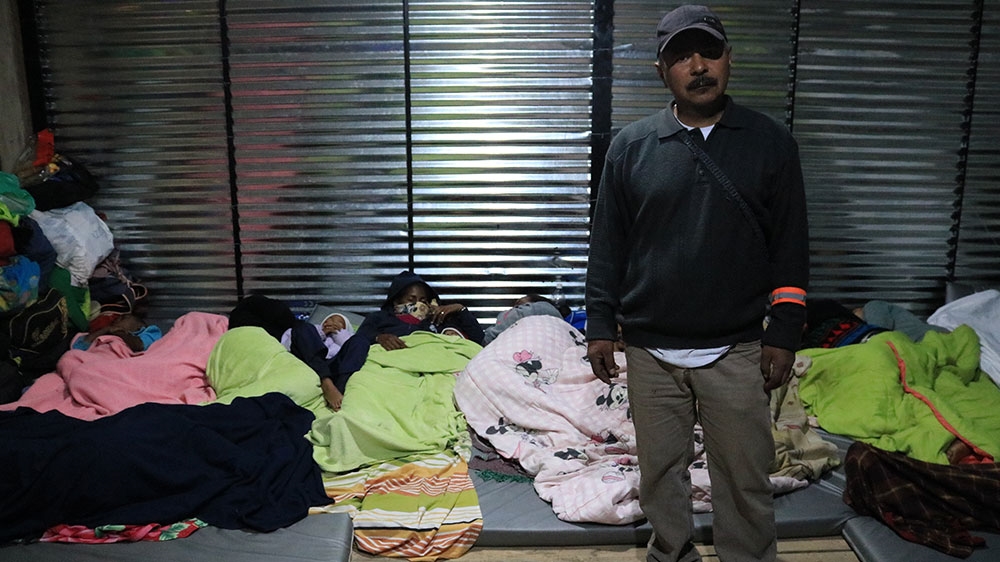 Others, like Duke in Pamplona, have opened their homes to migrants and refugees. Douglas Cabeza, 52, left his work as a shoe repairman three months ago to host Venezuelans full time.

When they outgrew his living room, he added a loft to his house. Now, he is building a set of shacks up the mountain from his home to shelter more people.

“Since about the third of January, a very strong flow has begun,” he said, standing in a loft surrounded by sleeping groups of women and children. “I don’t know how much longer this can last. So many people have left. How many more can remain?”

Truck drivers who pick up Venezuelans also provide some of the most crucial aid.

One hour in a car or truck can account for up to 15 hours on foot, said Victor Fernandez, coordinator for the Red Cross in Pamplona. Each day, he works at a small outpost set up for Venezuelans as they hike out of town and into the high mountains.

“The flow of children has increased a lot,” he said, as many parents have returned to bring back their families.

Most are able to catch rides by this point, but still about 300 pass through the checkpoint each day. Fernandez said about 45 percent of them carry legal documentation, and only five percent have stamped passports, meaning they used official border crossings.

He gives an orientation to a small crowd, explaining to them where to stop their hikes to avoid nightfall catching the migrants in the highlands, where temperatures can near freezing. And he hands out maps of the route, showing 47 hours by foot to the next big city, Bucaramanga. The Ecuadorian border, where many were headed, lay about a 15-day walk ahead. 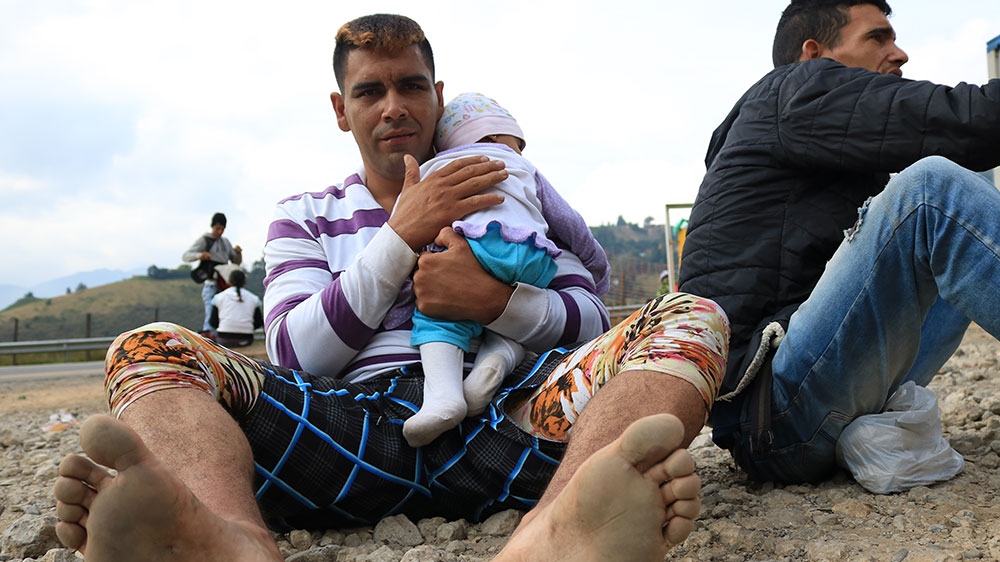 Faced with this news, many Venezuelans opt to stay put and hope to catch a ride, but few trucks have space by this point.

Algeni Garcia, who recently left Venezuela with his wife and two children, rested in the gravel parking lot near the Red Cross checkpoint. Holding his one-year-old daughter, he studied the walking map, dismayed by what he learned in the recent orientation.

“Mom says we can’t walk,” his nine-year-old son told him.

“Go tell her we have to walk,” he said, frustration ringing in his voice. “There is no future here.”