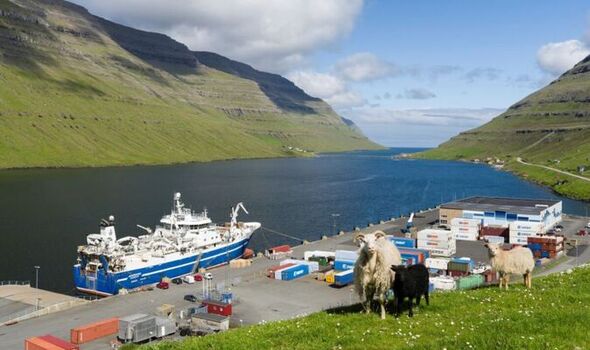 The Faroese granted Moscow the right to catch tens of thousands of tons of blue whiting in a special area shared with Britain despite the war in Ukraine.

Ian Gatt, chief executive of the Scottish Pelagic Fishermen’s Association, said: “It is hugely disappointing, if not surprising, that Faroe has concluded a fisheries agreement for 2023 with Russia.

“It was very clear what should have happened. Instead, Faroe has breached its moral obligations to the international community by proceeding.”

Mr Gatt said what “really sticks in the craw” is that Russian vessels are entitled to 72,000 tonnes of blue whiting, 13,000 tonnes of mackerel and 8,500 tonnes of herring.

He added: “Most of that blue whiting will come from UK waters because of a protocol agreed back in 1999 between the UK and Faroe. It permits Faroe to licence Russian vessels to fish in a ‘special area’ – essentially UK waters.”

The UK government needs to put much greater pressure on Faroe in light of the “unconscionable situation”, Mr Gatt said.

The fishing industry spent months calling on the Government to pressure the island country – 200 miles north of Scotland – to maximise damage to Vladimir Putin’s war machine by banning his trawlers.

When the Express went to the Faroe Islands in June, the Faroese government said Russian vessels had not been in UK waters since April but could return in December.

Commenting on the latest agreement agreed last week, the Faroese Minister of Fisheries Árni Skaale, said: “It is without a doubt the right thing to do for the Faroe Islands, and I am happy that all parties in the parliament, except one, see the rational in this.”

Fish makes up more than 90 per cent of Faroese exports, with Russia the single largest buyer, purchasing close to a quarter of all exports this year.

In July the UK government placed a 35 per cent tariff on Russian-caught white fish, which has contributed to a “perfect storm” for chippy owners.

More than 30 per cent of the whitefish on sale in Britain is caught by Russian ships, industry figures have suggested.

The rising cost of fish, energy bills and inflation has increased the risk of chip shops closing across Britain, the National Federation of Fish Friers ( NFFF) has warned.

Andrew Crook, president of the NFFF, said it is a “very worrying time” for chippy owners, with many stores at risk of closure.

He said: “People are starting to feel the squeeze. It’s a very worrying set of circumstances [with energy bills rising].

“This time last year, we started to see fish prices moving up. People are very worried about the future.

“The nation’s appetite is still very much [in favour] of cod and haddock.”

The war in Ukraine, inflation and extreme heat this summer have led to a surge in the cost of sunflower oil, potatoes and peas.

The Department for Environment, Food and Rural Affairs has been contacted for a comment.