Crowds march in cities across Algeria calling for ailing President Abdelaziz Bouteflika not to run in April election.

Tens of thousands of protesters marched through Algeria on Friday against ailing President Abdelaziz Bouteflika’s bid for a fifth term, the largest demonstrations in years.

Police helicopters circled overhead as protesters gathered in streets and parks of the capital, Algiers after midday Muslim prayer services.

Riot police vans lined the boulevard leading to the presidential headquarters and deployed around the march route.

Security forces fired tear gas at protesters in the Belcourt neighbourhood on the city’s Mediterranean shore.

Protesters hoped the demonstration would send a loud signal of public discontent to the gas-rich North African country’s secretive leadership before the April 18 presidential election.

“Look at the Algerian youth, all it is demanding is a valid president who can talk to the people,” Hamdane Salim, a 45-year-old public sector worker, said.

Among the crowd was Djamila Bouhired, 83, a heroine of the 1954-1962 independence war against France, who told reporters: “I’m happy to be here.”

There were also demonstrations in other cities such as Oran, Constantine, Setif, Tizi Ouzou and Bouira drawing in thousands, according to residents.

The protests were mostly peaceful, but scuffles broke out in the capital between police and protestors later in the day near the presidential palace, witnesses said.

About a dozen people were wounded in sporadic clashes with police, the AFP news agency reported.

Since last Friday thousands have taken part in anti-government protests seldom seen in the country.

“To come out onto the streets in such huge numbers is an act of courage by the Algerian people. In a sense they have got rid of their fear of the repressive regime. This could be a tipping point in Algeria,” Jeremy Keenan of the Queen Mary University of London, told Al Jazeera.

He said Algerian youth are not only calling for 81-year-old Bouteflika to not run in the upcoming election but also are demanding a change in the way their oil-rich country is governed.

“Fifty percent of the Algerian population, we are talking about 42 million people, is under the age of 27 and 30 percent of those are unemployed. You have a country that is potentially extremely rich. The revenues from oil in the last 20 years have been at least a trillion dollars. Of that at least 300 million is unaccounted for. People know this and are sick of it.” he added.

Bouteflika suffered a stroke in 2013 and has rarely appeared in public since then. The ailing leader has also not given any known speeches since he suffered the stroke.

For years, many Algerians have avoided public political activity fearing trouble from the omnipresent security services or becoming disillusioned as the country has been run by the same group of veterans since the 1954-1962 independence war with France.

There appeared to be few such inhibitions on Friday.

“People want to overthrow the regime,” some chanted, using a slogan from the 2011 Arab Spring turmoil which toppled leaders in Egypt, Libya, Yemen and Tunisia. 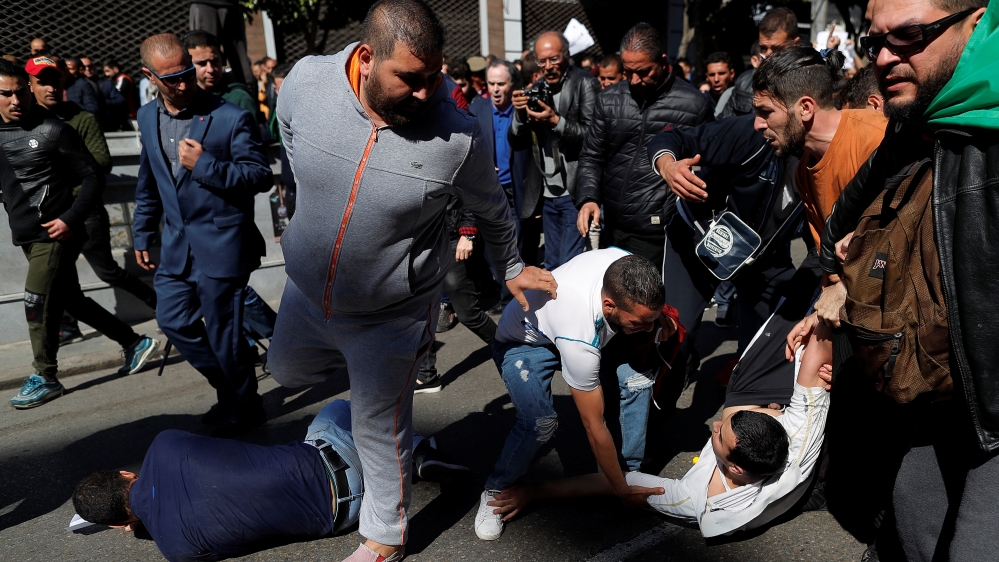 Bouteflika himself has ruled Algeria since 1999 and stamped out a decade-long rebellion early in his rule.

Many Algerians have long tolerated a political system with little space for dissent as a price to pay for peace and stability.

But the new protest waves appear to have broken the long taboo on public discussion of politics.

Bouteflika’s opponents say there is no evidence he is fit enough to lead the country and allege it is being ruled in his name by advisers. Authorities say he retains a firm grip on public affairs despite the rarity of his appearances.

A weak and divided opposition faces high hurdles in mounting an electoral challenge. Since the long-ruling FLN party again picked Bouteflika as its presidential candidate, several parties, trade unions and business groups have endorsed him.