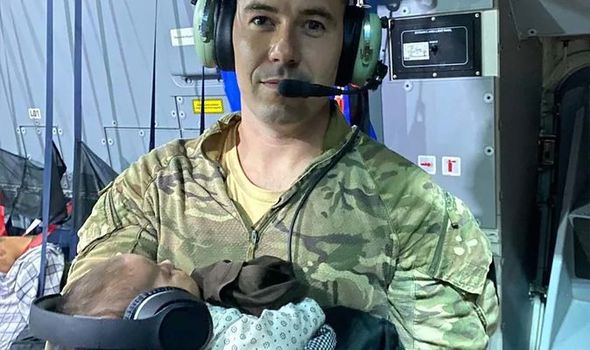 Sergeant Andy Livinxgstone, of 70 Squadron, said he did “what anyone else would have done” and gave the traumatised family a brief respite in their hour of need. The married 31-year-old saw a distressed family on a flight from Kabul, including the baby’s elder sister, who was in a “terrible state”.

Sgt Livingstone, a dad of two, said: “A little later, out of the corner of my eye, I see something fall on the floor. As I looked over, mum is scrambling to pick up her baby who has rolled off her lap because she’s absolutely exhausted. She couldn’t keep her eyes open.

“I try and strap the baby in as best as I can and use the seat belts just to make sure she can hold her.

“Within minutes I saw the same thing happen again. At that point, I did what I think anyone else would have done ‑ I’ve got two little girls myself ‑ and I just wanted to help.

“I went over and said, ‘You really need to sleep. Please let me take care of this baby, even for half an hour, so you can shut your eyes or anything that will make you feel better.

“I picked the baby up and she weighed absolutely nothing. You think, how exhausted must this poor woman be that she can’t bear that weight?”

The RAF loadmaster found a pair of ear defenders for the baby, and stood with the child in his arms for an hour while both the child and mother slept.

He added: “Any one of the crew would have done exactly the same. Anyone who was in that position would have done the same just to give her a bit of respite and to give this baby a bit of a break as well.

“Initially, it was fear. There was mistrust. Everything you do, there is a little bit of mistrust because they have no idea what is going on. I can’t even say it was gratitude.

“This was a woman who had seen her family go through too much. Looking at me saying, ‘Is it OK if I go to sleep? Is my baby going to be OK with you?’ I’ll never forget it.”

Everyone on the flight to Dubai was too exhausted to speak after facing a desperate scramble to get to Kabul airport for one of the final military flights out of the country.

Sgt Livingstone added: “Clearly, these people were people at the back of the queue getting into Kabul. It is really easy to see numbers and refugees but as soon as you have everyone on and you had a good look, there were just people.

“All that was going through my mind was, ‘If that was my family, what would they want?’ And what could I do to make that couple of hours a little less scary because these are people who have got one backpack for five of them.