The Ilulissat Icefjord Centre in Greenland is a 16,000-square-foot building designed to cultivate respect for the beauty, importance and vulnerability of ice. Cantilevering over an inland lake with views of a fjord called Kangia in the Greenlandic language, the center is an observation post, an exhibition hall, a meet-up spot for locals, a workspace for climate scientists and a classroom for schoolchildren, all lodged beneath an undulating roof that is also a promenade.

When it opens on July 3, in the western coastal city of Ilulissat, it will be the first of six planned centers supporting tourism in Greenland, which is seen as essential to the territory’s economic future in the face of growing unemployment. (The expected number of annual visitors once Covid travel restrictions are lifted is 25,000.)

“Before this, it was only heads of state and very high-level celebrities who had the opportunity to experience the real story about the ice,” said Jesper Nygard, the chief executive of Realdania. The nonprofit Danish organization supplied much of the financing for the $24.8 million project, which is also supported by the government of Greenland and a local municipality. “Now it will be a bigger group, but not a very big group because there’s a sustainability agenda,” Mr. Nygard said. 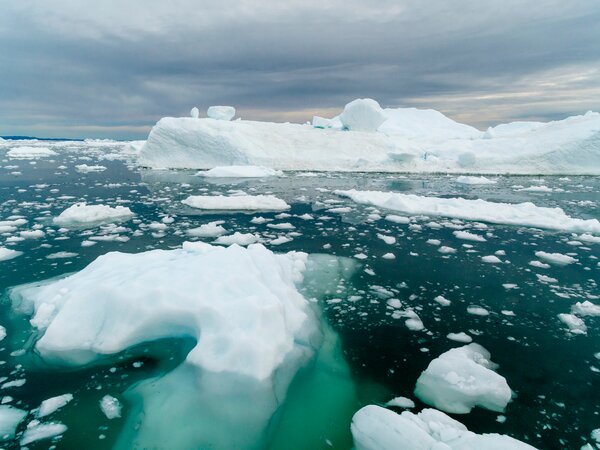 With 4,500 people (and almost as many dogs), Ilulissat is Greenland’s third-biggest city. To live there, 150 miles north of the Arctic Circle, is to have a front-row seat on a perpetual parade of ice.

A 1,200-square-mile glacier called Sermeq Kujalleq crouches at the end of the 37-mile-long Ilulissat Icefjord, stretching forward and retreating with the seasons and roaring as it sloughs off great chunks of itself. It is the fastest glacier in the world, moving at an average 44 yards a day. The icebergs it calves, some as tall as skyscrapers, bump along the fjord before entering Disko Bay and then drifting into Baffin Bay. (An ancestral offspring may have sunk the Titanic off the coast of Labrador, Canada.)

This region is also where the global climate crisis is made visible. From 2002 to 2012, Sermeq Kujalleq retreated nine miles — in all of the preceding 99 years it had fallen back just eight miles — and its meltwater is contributing to the rise of the world’s oceans. In 2004, UNESCO placed the Ilulissat Icefjord on its World Heritage List.

By showcasing the theme of ice in a sensitively designed structure, the Icefjord Centre is trying to resolve the potential conflict between environmental preservation and tourism impact. The last thing a dangerously warming landscape needs, one could argue, is an increase in visitors boosting carbon emissions. But the center aims to offset such harm by educating the public, both in person and through internet-based programming, on climate change.

The Copenhagen-based architect Dorte Mandrup triumphed over celebrity peers, including the design group Snohetta, Olafur Eliasson and Kengo Kuma, to win a 2016 competition to design the project. Ms. Mandrup compares the building to a snowy owl with outstretched wings that has lightly touched down on bedrock.

Though its appearance might be effortless, construction was anything but. In Greenland, snow melts in May and returns in September, leaving a narrow window. There are no roads between cities; transport is by boat, helicopter, snowmobile or dog sled. Between late November and mid-January, the sun never rises. And then there is the required five-day quarantine for the architects who worked on site during the pandemic.

The building is composed of 50 skeletal steel frames with geometries that morph from triangles to squares and back to triangles. Eighty percent of the steel is recycled, and the structure is finished in European oak. Ms. Mandrup and her team mounted a model of the building in a wind tunnel in Denmark to ensure that the aerodynamic form would prevent snow drifts from piling up under harsh western winds. (Potato flour was used as a stand-in for snow.) The disassembled structure was then packed into containers and shipped to Greenland, where it was rebuilt on site.

Inside the boomerang-shaped center are amenities typical of museums the world over: an information desk, a gift store, a cafe. Less typical is the spellbinding landscape presented through glass walls containing motorized wood louvers that disappear into the ceiling.

The centerpiece is a 4,300-square-foot exhibition space presenting “The Story of Ice,” a permanent multimedia installation that traces the science, anthropology and environmental impact of ice over hundreds of thousands of years. Designed by JAC Studios of Copenhagen, the exhibit includes ancient ice cores, a sound installation evoking a river moving through an Arctic landscape and an immersive photo display of the Greenlandic ice sheet.

Beyond the exhibition space are administrative and research offices where scientists can come in from the field and review data. There is also an outdoor classroom and plans for remote educational programs for children globally. The portions of the building that are heated (about three-fifths of its total area) use recycled energy from the town’s hydroelectric plant for net zero carbon emissions. An outdoor fireplace warms a sheltered gathering spot on the west terrace. And the rooftop boardwalk is a perch for watching sunsets and the northern lights. Descending four small steps at one end of the roof, visitors can embark on a hike along a trail that leads to the ruins of an Inuit settlement.

The roof/promenade is just one illustration of how the sculptural building acts as a “gateway between civilization and the enormous wilderness,” as Ms. Mandrup described it. She is a specialist in creating platforms for the study of delicate habitats, or what she calls “irreplaceable places.” Her 2017 Wadden Sea Centre on Denmark’s western coast, one of a group of three related projects, is a thatched-covered shard on the fringe of an intertidal zone rife with migratory birds. The Whale, a building in progress for the Norwegian island of Andoya, above the Arctic Circle, is a parabolic concrete shell with a long, horizontal view of mountains and cetacean-filled waters.

The Icefjord Centre also finds an urban echo in the rooftop park Ms. Mandrup has designed for an Ikea store in Copenhagen. When it opens, it will offer a rare spot of greenery in an industrial neighborhood and connect to a new kilometer-long pedestrian path.

“I think you have a responsibility when you take away land,” she said. Not every architect would.