Refusing to move from the Capitol steps, the first-term congresswoman from St. Louis intensified pressure on the Biden administration and showed her tactics could yield results. 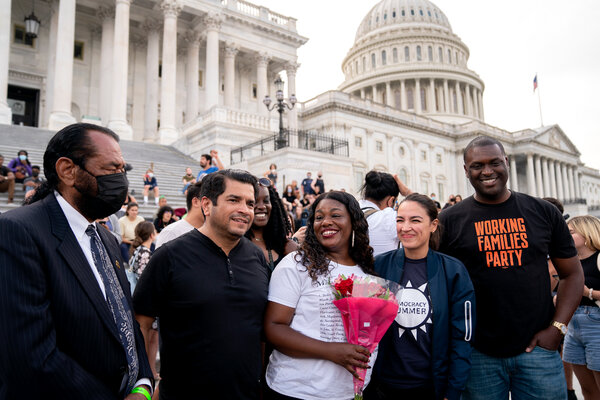 WASHINGTON — Representative Cori Bush of Missouri was 20 the first time she was evicted, tossed out by a landlord after a violent fight with her boyfriend.

The next time, she was 29 and had quit a low-wage job to attend nursing school, and could no longer afford her rent.

It happened a third time in 2015, as Ms. Bush threw herself into the protest movement in Ferguson, Mo., after a white police officer shot and killed Michael Brown, a Black teenager. The eviction notice was waiting on her door one night — prompted, she said, by neighbors who feared she would bring the unrest home with her.

So when it became clear on Friday night that neither Congress nor the White House was going to act to stop a pandemic-era federal eviction moratorium from expiring, leaving hundreds of thousands of low-income Americans at risk of losing their homes, Ms. Bush — now 45 and a first-term Democratic congresswoman from St. Louis — felt a familiar flood of anxiety and a flash of purpose.

As her colleagues boarded planes home for a seven-week summer recess, she took a page from her years as an activist and did the only thing she could think of: She got an orange sleeping bag, grabbed a lawn chair and began what turned into a round-the-clock sit-in on the steps of the United States Capitol that galvanized a full-on progressive revolt.

She stayed put — in rain, cold and brutal summer heat — until Tuesday, when President Biden, under growing pressure from Ms. Bush’s group and Speaker Nancy Pelosi, abruptly relented and announced a new, 60-day federal eviction moratorium covering areas overrun with the Delta variant of the coronavirus. Even as Mr. Biden reiterated his administration’s fears that the ban would run afoul of the courts, it was a striking reversal for his team, designed to give state and local governments time to distribute billions of dollars in federal rental assistance that has yet to go out the door.

“My brain could not understand how we were supposed to just leave,” Ms. Bush said in an interview on Wednesday, recounting the months she spent 20 years ago living out of a 1996 Ford Explorer. “I felt like I did sitting in that car — like, ‘Who speaks for me? Is this because I deserve it?’ ”