People who have predicted election after election are scratching their heads about this one, as Election Day approaches.

This article is part of our Midterms 2022 Daily Briefing 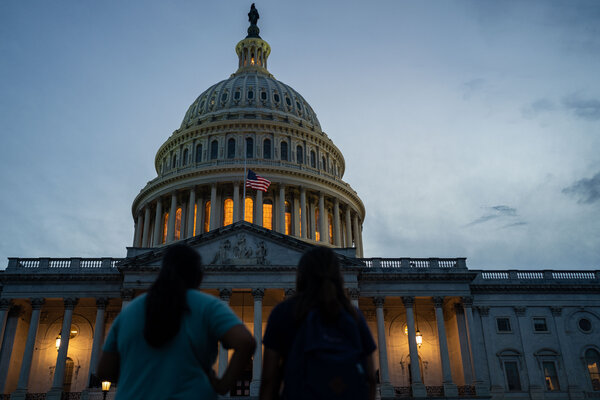 Doug Sosnik is the kind of political analyst who likes to figure out the results of the next election well in advance — it’s just how he’s wired.

But even Sosnik, a former adviser to President Bill Clinton who now tries to forecast elections as a hobby, is stumped about the 2022 midterms.

“I can’t figure this one out,” Sosnik said on Monday, a day after Democrats passed Build Back Better — whoops, pardon me, the Inflation Reduction Act, a woolly mammoth-size package that aims to shrink both the deficit and the risk of catastrophic climate change.

The bill’s passage is one of a string of recent victories for beleaguered Democrats, who have spent the past 18 months squabbling among themselves and fretting about the coming elections. Gas prices are ticking down. Jobs are plentiful, with the unemployment rate at a 50-year low.

Congress also passed the bipartisan CHIPS Act, a bill that would provide $52 billion in subsidies and tax credits to companies that manufacture chips in the United States and would add more than $200 billion for applied scientific research.

Even President Biden, whose age and concern about the virus forced him to spend much of the 2020 presidential election campaigning from his home in Wilmington, Del., managed to shrug off 18 days of coronavirus-induced quarantine.

As Ethel Merman might say, everything seems to be coming up roses for Joe and the gang in recent weeks, despite widespread predictions that Democrats are likely to lose the House and possibly the Senate.

According to the usual logic Sosnik uses to make predictions, Democrats should expect a “blood bath” in the fall. But he’s not so sure anymore and is questioning everything he knows about the deeper patterns of U.S. elections.

He is puzzled by one thing in particular: Which past elections offer a guide to 2022?

The question doesn’t have an easy answer, in part because times have changed — there was no recent assault on the Capitol with the partial backing of one particular party in the 1982 midterms, for instance — and in part because the nature of political partisanship has changed.

That latter point makes it really hard to compare today’s approval ratings to the past; back in, say, the 1960s, voters were much more inclined to give the president the benefit of the doubt. Today, far fewer partisans are willing to give the other side an ounce of credit or respect.

More Coverage of the 2022 Midterm Elections

Midterms are completely different animals than presidential election cycles, too: Fewer voters turn out, and the electorate tends to be older and more Republican.

Historically, or at least since World War II, the party in power has lost seats in every midterm election but two: 1998 and 2002.

The first came as Clinton skillfully exploited the unpopularity of congressional Republicans, whose impeachment drive backfired. The second came after the attacks of Sept. 11, 2001, when patriotic sentiments were still running high.

But these midterms are structurally different from many others. For one thing, many of the Democratic House members in battleground districts — the Cindy Axnes and Elissa Slotkins of the world — were elected in the anti-Trump wave of 2018. Those who held onto their seats in 2020, a good year for Republicans in Congress despite Trump’s loss, may know a thing or two about staying in office.