From the coronavirus response to the easing of restrictions, here’s what voters think of the issues that could surface during the V.P. face-off. 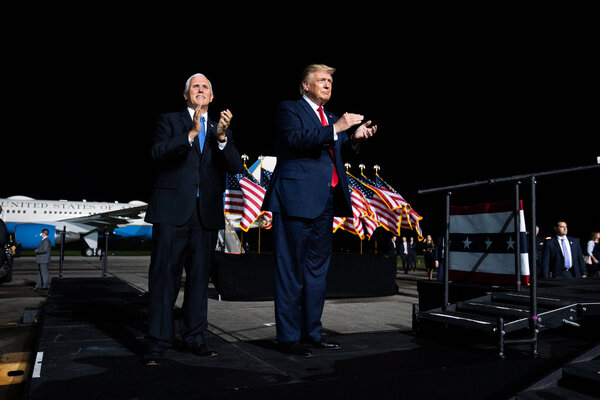 Vice-presidential debates have been taking place for more than 40 years, but there has never been one that felt this consequential. President Trump is still receiving treatment for the coronavirus, and both his age, 74, and Joseph R. Biden Jr.’s, 77, would make them the oldest people in United States history to begin a term as president.

At the very least, the debate Wednesday night between Senator Kamala Harris and the incumbent vice president, Mike Pence, promises to be a more civil battle of ideas than the presidential shoutfest last week. But it is also the biggest chance for these candidates to audition on the national stage and present themselves as viable deputies after a campaign season dominated by the president and the pandemic.

Mr. Pence and Ms. Harris are both confronting an electorate that is more or less divided. About one-fifth of voters say they don’t have much of an opinion of each candidate, but among those who do, strong opinions outnumber mildly favorable or unfavorable views.

“Will it have any impact on the numbers?” Ashley Koning, a political scientist at Rutgers University who directs the Eagleton Center for Public Interest Polling, asked of this week’s debate. “I don’t necessarily think so.”

“The main thing is for Pence and Harris to prove that they have what it takes, and to show that they can be a heartbeat away from the presidency,” she added. “Given the circumstances, it’s a pretty significant role.”

Has Pence’s role in the virus response affected views of him?

Throughout his vice presidency, Mr. Pence has in many ways offered a perfect foil to Mr. Trump by projecting the image of a quiet, spotlight-skirting deputy to the bombastic commander in chief. In an era when voters are far more likely to say they object to Mr. Trump’s style than to his substance (and most still think he would handle the economy better than Mr. Biden), Mr. Pence might stand to benefit from this more understated brand of conservatism.

But Ms. Harris is unlikely to let him easily escape the fact that he was appointed to lead the White House’s coronavirus response — a response that a wide majority of Americans not only disapprove of, but also have come to resent.