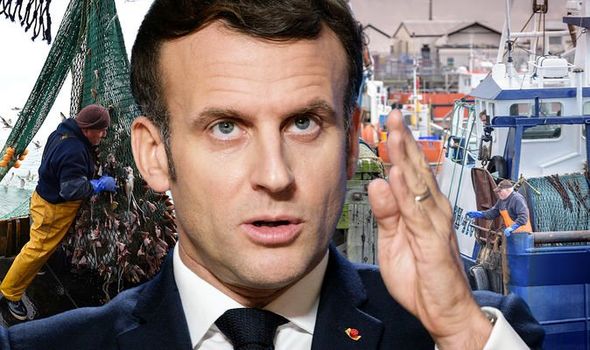 The scallop trawler was ordered to divert to the port of Le Havre on Thursday after French authorities said it was fishing in French waters without a licence. Owner Macduff Shellfish said the vessel was fishing legally but had been “caught up” in a dispute about post-Brexit fishing rights.

Why are the French upset about the new arrangements?

Britain has granted 98 percent of the permits requested by EU vessels and more are expected to be granted.

But 55 fishing boats continue to be denied a licence to fish in waters around Jersey, a crown dependency, after failing to provide proof that they operated in the area before Brexit.

The island’s government has agreed to allow 49 other vessels with a temporary licence to fish in Jersey waters until 31 January 2022 to give them more time to prove they are eligible for a permit.

What has France threatened to do?

Ministers have been sabre-rattling on the French airwaves, claiming Britain only understands the language of force.

They say British fishing boats will be blocked from French ports from Tuesday unless a resolution is found and again warned electricity supplies to Jersey could be cut.

Paris is also planning to create a red-tape nightmare for British trucks and boats at its borders by carrying out painstaking checks on goods before allowing entry to the country.

How has Britain responded?

Environment Secretary George Eustice said the French threats appeared to breach international law and warned the UK would respond in an “appropriate and calibrated” manner if they were carried out.

He said Cornelis had been granted a licence by the EU but there were reports it was later removed from the list of vessels permitted to fish in French waters for reasons that were unclear.

Downing Street said it was continuing to seek talks with the French government and the European Commission to resolve the dispute over fishing licences.

Is there more to the row than fishing rights?

Emmanuel Macron is less than six months away from an election and is struggling in the polls.

The French President has always tried to talk tough about Britain to boost his ratings at home and fishing is an important industry to the country.