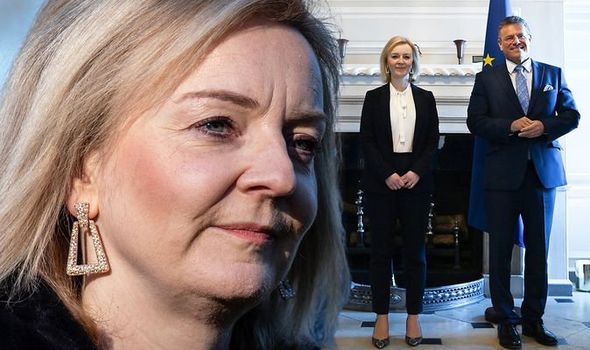 Ms Truss is expected to travel to Brussels next week to try and thrash out a deal on problems with the Northern Ireland Protocol which she fears are a threat to peace.

She wants to get a deal done before the Stormont elections in May – in which Sinn Fein is widely expected to be the biggest party – and is urging the European Union to show greater “pragmatism”.

Brexiteers are pushing Ms Truss to demand sweeping changes to the protocol and not to settle for changes to customs checks arrangements.

Sammy Wilson, one of the DUP’s most ardent eurosceptics, urged Ms Truss, who is considered a leading contender to succeed Boris Johnson in any future leadership election, to follow the example of Lady Thatcher.

He said: “Mrs Thatcher won the heart of her party and the country by famously standing up to the EU defying their unreasonable budget demands in the 1980s. [Acting] as a true leader who spoke the language of the ordinary people of the UK and was not constrained by the diplomatic double speak of the civil service establishment, she threatened to use her handbag on the intransigent EU politicians and she succeeded.

“As she enters a period of intense negotiations with Maroš Šefčovič, Liz Truss should learn from the leader she appears to want to emulate.”

Mr Wilson warned Ms Truss against striking a deal which failed to address his main concerns about the protocol, which is blamed for disrupting trade between Northern Ireland and Great Britain.

He said: “They have to know we are serious and not going to be pushed around.”

Ms Truss has said she is prepared to use Article 16 if an agreement cannot be reached but her “overwhelming preference” is understood to be a negotiated outcome.

A source close to the foreign secretary said: “Fundamentally, the EU will need to be more flexible if we want to get a deal. Liz’s top priority is defending peace in Northern Ireland.

“The EU has a responsibility to help fix this, because if we don’t then stability in Northern Ireland will be risked. Northern Ireland isn’t in the single market, and the EU need to stop treating it like it is.

“We need to see more open-mindedness and creative thinking to get a deal done and that’s what we hope to see over the next few weeks.”

Ms Truss and Mr Šefčovič last week met face to face for the first time since she took over responsibility for the UK’s negotiations with the EU following Lord Frost’s resignation last month. They met at her official country residence, Chevening House in Kent, and at a welcome dinner on Thursday evening enjoyed Scottish smoked salmon, Welsh lamb, Kent apple pie and Northern Ireland whiskey.

The DUP’s Mr Wilson said: “There is no harm in Liz Truss having pleasant dinners with Maroš Šefčovič but she should  keep the handbag under the table ready for use.”