Scottish independence: Alister Jack says ‘it’s no for a generation’

Michelle Ballantyne, who quit the Scottish Tories last year, was unveiled by Reform Party chairman Richard Tice as the group’s leader north of the border. Mr Tice described her as “a strong leader” and “someone who has courage, real life experience, integrity, and common sense”.

Last week the electoral commission confirmed it had given permission for Mr Farage’s Brexit Party to be renamed as Reform UK.

In May Scotland is due to hold its parliamentary elections, which were originally due to take place last year before being delayed due to the coronavirus pandemic.

Outlining Reform UK’s vision for Scotland, Ms Ballantyne said: “We are pro Scotland and pro the UK because we believe it is simply the best choice for the people of these islands.

“Why? Because it is the most successful union ever created. 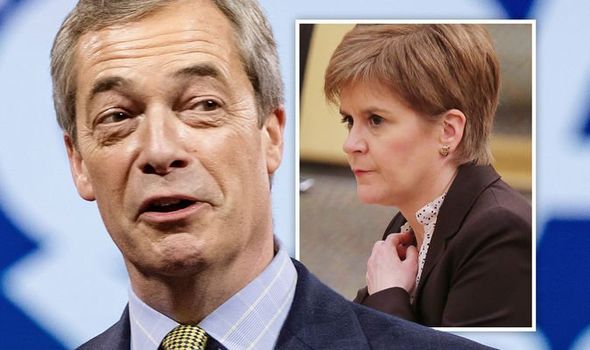 “It has served us well for over 300 years and never so well as in the last few months as the combined power of the Union has brought us financial aid and the first and fastest vaccination programme in Europe.”

Mr Tice said his party would campaign passionately to protect the future of the United Kingdom and warned an independent Scotland would “diminish us all”.

He added: “We’re bound together in so many ways, we’re like a big loving family.”

Polling indicates Nicola Sturgeon’s SNP is currently set to win a majority when Scots go to the polls, with the SNP planning to claim their victory gives them a mandate for a new independence referendum.