The White House says Trump will sign the measure, but will also declare national emergency to build border wall. 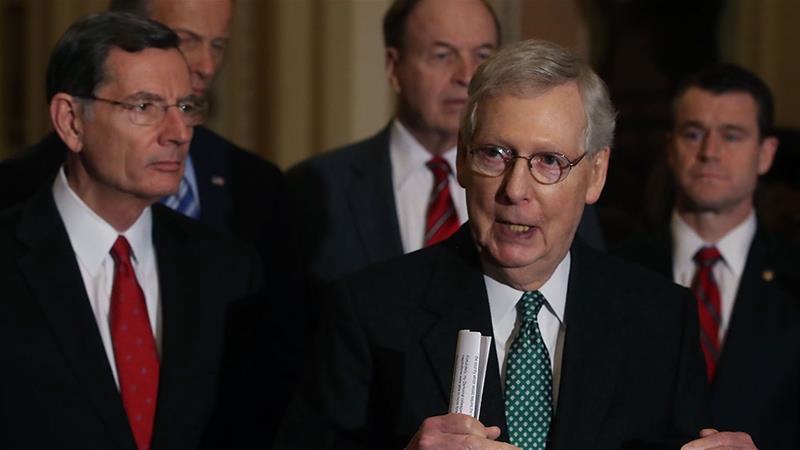 The House of Representatives in the United States has passed a bill to avert another partial government shutdown with bipartisan spending legislation that funds new barriers for part of the US-Mexico border, but not the $5.7bn that President Donald Trump sought for a wall.

The Democratic-led House on Thursday backed the bill 300-128, with 86 House Republicans voting in favour. The vote followed an earlier approval by the Republican-led Senate, 83-16.

As the Senate prepared to vote on the bill, Senate Majority Leader Mitch McConnell told the chamber that Trump said he would sign the bill and would also declare a national emergency to build his border wall.

The White House later confirmed McConnell’s statement, saying the president would “take other executive action – including a national emergency – to ensure we stop the national security and humanitarian crisis at the border”.

Pelosi said there was not a crisis at the border with Mexico that required an emergency order.

She didn’t say if House Democrats would legally challenge the president, but experts have long speculated that such an order would immediately be thrown to the courts.

Pelosi said if Trump invoked an emergency declaration it should be met “great unease and dismay” as an overreach of executive authority.

Several Republicans have also cautioned Trump against taking the unilateral action on the wall, but the president has claimed that declaring national emergencies is “not unique”.

However, an Associated Press news agency fact-check found that the emergency action Trump had been contemplating would be rare.

The presidents he cites – Barack Obama, George W Bush and Bill Clinton – did not use emergency powers to pay for projects that Congress wouldn’t support.

Thursday’s bill does not provide the $5.7bn request for Trump’s border wall – a demand that triggered the previous shutdown, which lasted for 35 days. Democrats oppose the wall, calling it ineffective, immoral and expensive.

The bill does provide $1.37bn in new money to help build 55 miles (88.5km) of new physical barriers on the border. It is the same level of funding Congress appropriated for border security measures last year, including barriers but not concrete walls.

A border wall was a central 2016 campaign promise by Trump. He originally said Mexico would pay for the wall along the 3,200km border, an idea Mexico dismissed.

“Just so you know – we’re building the wall anyway,” Trump said at a rally in the border city of El Paso, Texas, earlier this week.