In Washington Post interview, Nancy Pelosi says Trump just ‘isn’t worth it’, impeachment is ‘so divisive’. 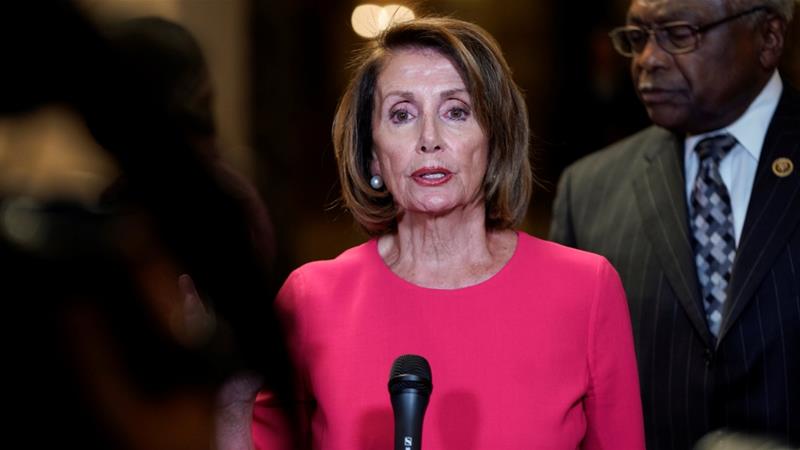 No effort should be made to impeach US President Donald Trump unless the reasons are overwhelming and bipartisan, given how divisive it would be for the country, US House Speaker Nancy Pelosi said in a Washington Post interview published on Monday.

“I’m not for impeachment,” Pelosi, the top US Democrat, said in the interview, which was conducted last week.

“Impeachment is so divisive to the country that unless there’s something so compelling and overwhelming and bipartisan, I don’t think we should go down that path, because it divides the country,” she said. “He’s just not worth it.”

Special Counsel Robert Mueller is investigating Russian interference in the 2016 US presidential campaign and whether there was any collusion between Trump’s campaign and the Russian government.

Mueller is also looking into whether Trump has attempted to obstruct the investigation. Trump has called the investigation a “witch-hunt” and denied any collusion. Russia has denied the US intelligence community’s finding that Moscow interfered in the US political arena.

Mueller is expected to send a report soon to Attorney General William Barr outlining his findings. Barr, Trump’s nominee for attorney general, was confirmed last month by the Senate putting him atop the Justice Department.

If there is evidence of wrongdoing, that could prompt Congress to take action against the president. Several panels in the Democratic-controlled House of Representatives are also investigating the president.

Although Pelosi said she believed it would be too divisive to try to impeach Trump, she characterised the president as unfit to hold office.

“No, I don’t think he’s fit to be president of the United States,” Pelosi told the Post, adding that he was “ethically unfit, intellectually unfit, curiosity-wise unfit.”

She said it was “terrible” when Newt Gingrich was speaker in 1999 and impeached the then-president, Bill Clinton.

“There’s no question that that was horrible for the country. It was unnecessary and the rest,” she told the Post.

Democrats face growing pressure from the left for impeachment, including a multimillion-dollar ad campaign from liberal billionaire Tom Steyer to build support for action against Trump.

The House Judiciary Committee, which would lead an impeachment inquiry, recently launched a broad probe of corruption, abuse of power and obstruction of justice allegations against Trump that could amount to impeachable offences.

In the wide-ranging interview, Pelosi also said she believed Trump ended the longest ever shutdown in United States history earlier this year because of public sentiment.

She said the current political climate in the US is the most “divisive and serious” in her 32 years in Congress.