WASHINGTON — Attorney General William P. Barr was serving his first stint in the job nearly three decades ago when two Libyan intelligence officials were indicted in the 1988 bombing of a U.S. jetliner over Lockerbie, Scotland, that killed 270 people, including 189 Americans.

“This investigation sends a powerful message,” Mr. Barr said when he announced the charges in 1991. “We have the resolve and ability to track down, no matter how long it takes, those responsible for terrorism against Americans.”

Now, the Justice Department under Mr. Barr plans to unseal criminal charges in the coming days against another suspect in the bombing, a Libyan bomb expert named Abu Agila Mas’ud, according to two people familiar with the case. Monday will mark the 32nd anniversary of the attack.

A Justice Department spokesman declined to comment. Mr. Mas’ud’s exact whereabouts is unknown; at one point, he was imprisoned in Libya for unrelated crimes.

The case against Mr. Mas’ud in part relied on the work of a journalist named Ken Dornstein, who was working at the PBS news show “Frontline” when he began his own exhaustive investigation into the bombing. His brother, David, was among those killed aboard the plane, Pan Am Flight 103.

The bombing was the worst terrorist attack in British history and a devastating strike against the United States that came at a low point in its relations with Libya. President Ronald Reagan had ordered airstrikes against Libya two years earlier in retaliation for the bombing of a German nightclub frequented by American armed service members. American authorities concluded that the Pan Am bombing was Libya’s response.

Mr. Dornstein approached the F.B.I. in 2012 with new information about Mr. Mas’ud, a shadowy former Libyan intelligence operative who appeared to have played a critical role in the bombing.

The case represents a book end of sorts for Mr. Barr, who plans to step down next week after falling out with President Trump over his increasing unwillingness to serve the president’s political agenda. Beyond bringing cases against Lockerbie suspects three decades apart, both of Mr. Barr’s tours as attorney general have been largely defined by cases overseen by Robert S. Mueller III, who was the head of the department’s criminal division during the initial Lockerbie inquiry and served from 2017 to 2019 as the special counsel investigating the Trump campaign’s ties to Russia’s election interference. 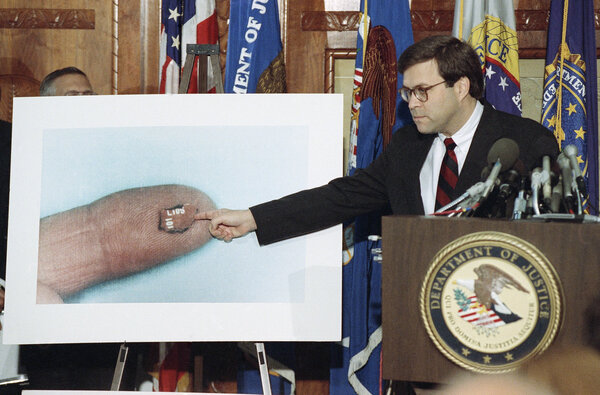 The investigation into Lockerbie, code-named Scotbom by the F.B.I., has long frustrated American investigators. Mr. Mueller said years later that he was haunted by the attack and his inability to bring other conspirators to justice.

“We renew our efforts to keep our people safe, and to rid the world of terrorism. We will continue to move forward,” Mr. Mueller said in a 2008 speech to honor the victims. “But we will never forget.”

The Justice Department’s efforts to prosecute the first two suspects, Abdel Basset Ali al-Megrahi and Al-Amin Khalifa Fhimah, were initially stymied when Libya refused to extradite the men to either the United States or Britain for trial. Eventually, the Libyan government agreed to let them stand trial in the Netherlands under Scottish law, a highly unusual arrangement.

Mr. al-Megrahi was convicted in 2001 and sentenced to life in prison, with a 27-year minimum term, while Mr. Fhimah was acquitted, further frustrating American investigators.

Nearly a decade later, Scottish officials granted Mr. al-Megrahi a compassionate release because he had cancer, and he was given a hero’s welcome in Libya. The decision to free him angered the U.S. government and family members of the victims, including Mr. Dornstein, who believed they were watching a killer walk free.

Mr. al-Megrahi died in 2012. His family posthumously appealed his conviction in Scotland, where the request is pending.

In an interview, Mr. Dornstein described Mr. Mas’ud as a ghost because of yearslong efforts by the Libyan government to deny his existence even after his name surfaced at the trial. Mr. Mas’ud’s name had also appeared in C.I.A. cables written before the Lockerbie bombing. A Libyan informant working for the C.I.A. who defected and was later resettled to the United States had told the spy agency about Mr. Mas’ud and his connection to Mr. al-Megrahi before the bombing. The informant suspected the pair had been planning an intelligence operation shortly before the Lockerbie bombing.

When Col. Muammar el-Qaddafi was overthrown as the leader of Libya in 2011, Mr. Dornstein, then a senior producer for “Frontline,” seized on the resulting chaos there to try to determine whether others were involved in the bombing.

In 2015, a three-part documentary that Mr. Dornstein wrote, directed and produced aired on “Frontline,” detailing his quest to solve the bombing. He helped identify Mr. Mas’ud as a key remaining suspect in the case and located him in a Libyan prison. In late 2018, Mr. Mas’ud was still incarcerated in Libya, The Times of London reported.

As part of his investigation, Mr. Dornstein went to Libya three times in 2011 and 2012, where he conducted interviews, found documents and scoured Tripoli for suspects.

An important breakthrough came during a 2012 trip to Germany, where documents led Mr. Dornstein to a former Libyan intelligence official named Musbah Eter, who said Mr. Mas’ud had been involved in the disco bombing in West Berlin in 1986 that killed two American soldiers — an attack planned by Libyan intelligence and the Libyan Embassy in what was then East Berlin.

Mr. Eter ultimately revealed to Mr. Dornstein that Mr. Mas’ud had admitted to a role in Lockerbie, a fact that seemed to be confirmed by passports that Mr. Mas’ud used in both of the deadly operations.

Mr. Eter said that Mr. Mas’ud, who worked for Libya’s former head of intelligence Abdullah al-Senussi, was in a Libyan prison and even sent Mr. Dornstein a picture of him in a jumpsuit. Mr. Eter described Mr. Mas’ud as a quiet technician who had managed to keep a low profile even inside Libyan intelligence circles.

In an interview, Mr. Dornstein said Mr. Mas’ud most likely installed the timing device on the bomb that detonated shortly after Pan Am 103 took off. The bomb had been placed inside a portable cassette player put aboard a plane in Malta and transferred twice before being put on Flight 103.

When Mr. Dornstein met with F.B.I. in agents in Boston in 2012, he shared his findings. In 2014, he contacted the agents again and told them that Mr. Mas’ud was alive and imprisoned in Libya.

While the F.B.I. did not reveal details of its investigation to Mr. Dornstein, he said he was able to glean tidbits when agents followed up on his tips and interviewed Mr. Eter in Berlin beginning in 2014.

Even with Mr. Dornstein’s information, the case seemed to languish until this year, when prosecutors who had been looking at ongoing terrorism cases brought it to Mr. Barr’s attention.

While the F.B.I. has gathered compelling evidence against Mr. Mas’ud, Scotland has been investigating him, too. Mr. Barr played a major role in moving the case forward, according to people familiar with the discussions.