KENOSHA, Wis. (Reuters) – President Donald Trump defied requests to stay away and visited Kenosha, Wisconsin, on Tuesday, not to comfort the family of a Black man shot by a white police officer but to express support for law enforcement in a city rocked by civil unrest. 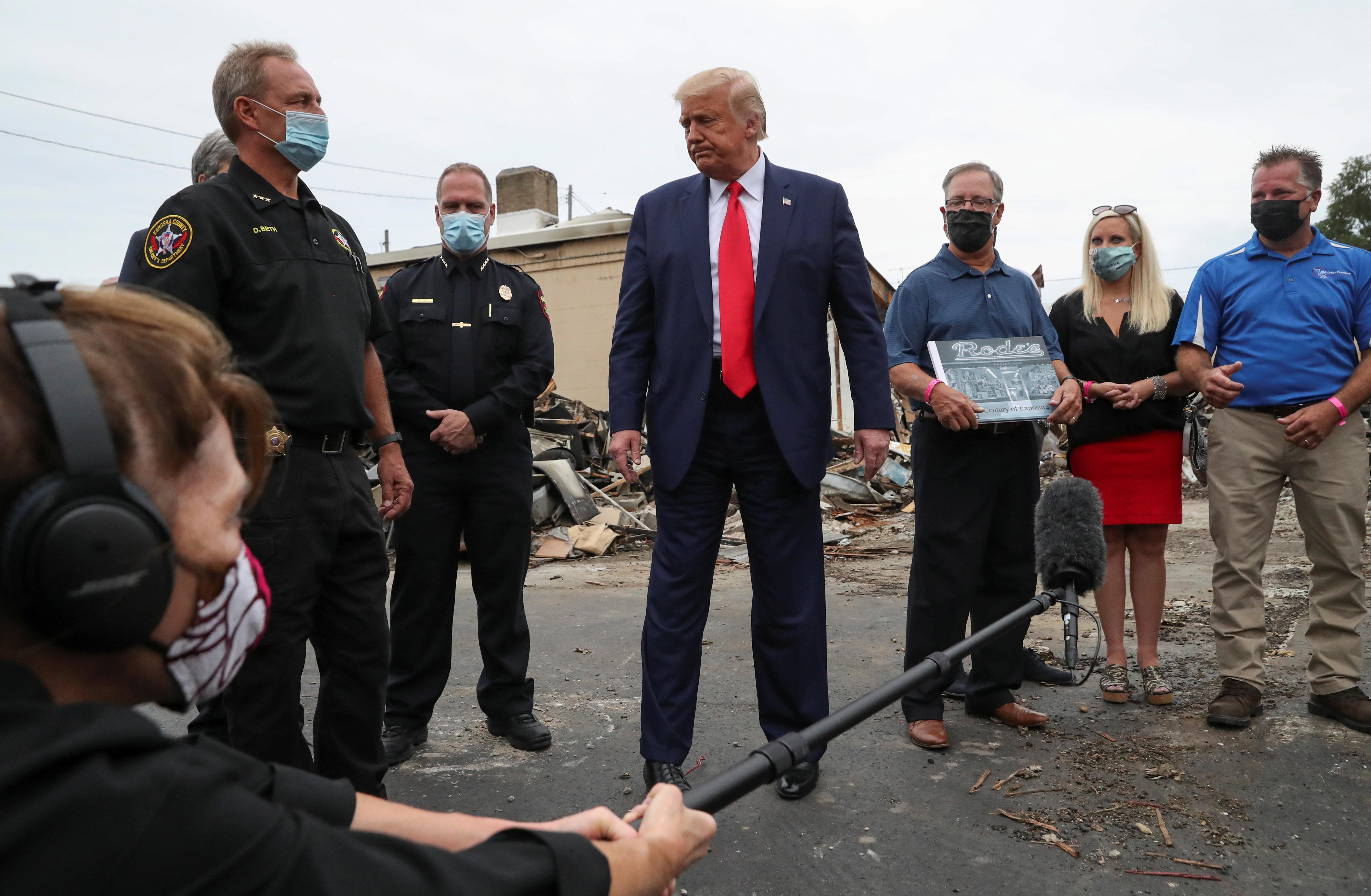 With the United States polarized over issues of racial injustice and police use of force, Trump is appealing to his base of white supporters with a “law and order” message as opinion polls show him cutting into the lead of his Democratic rival, former vice president Joe Biden.

The Republican president did not visit Blake, who was paralyzed from the waist down after a white police officer fired at his back seven times on Aug. 23, nor his family, but did plan to meet with his mother’s pastor.

Instead he promised to rebuild Kenosha and provide more federal spending to Wisconsin, a political battleground state Trump won narrowly in 2016 and badly needs to keep in his column as he seeks re-election on Nov. 3.

The president visited a burned-out furniture store that was destroyed in the upheaval and then a makeshift command center to praise National Guard troops who were called in to reinforce local police after several nights of peaceful protests gave way to looting, arson and gunfire.

“These are not acts of peaceful protest, but really domestic terror,” Trump told a group of local business leaders in a high school gym, flanked by his Attorney General Bill Barr and Acting Secretary of Homeland Security Chad Wolf.

Peaceful demonstrators have complained that violent agitators, often white, have hijacked their protests with property damage. But many have also sharply criticized the police, saying the United States needs to completely rethink its law enforcement practices.

“To stop the political violence, we must also confront the radical ideology. … We have to condemn the dangerous anti-police rhetoric,” Trump said.

The president pledged to provide $1 million in federal support to Kenosha law enforcement, $4 million to small businesses, and $42 million to public safety statewide, contrasting that with leftist calls to “defund the police.”

The state’s Democratic governor and the city’s Democratic mayor both urged Trump to avoid Kenosha to prevent inflaming tensions and allow citizens to heal, but the president dismissed their appeals in order to show support for law enforcement and business owners whose stores were looted and set ablaze.

Trump has sought to blame Democrats, calling them soft on the violence and property damage that has broken out at anti-racism protests since George Floyd, a Black man, died on May 25 after a white police officer knelt on his neck.

The country was still reckoning with that case when a white officer in Kenosha fired seven shots at the back of Jacob Blake, 29, as he entered his car on Aug. 23.

Kenosha has become one of the flashpoint cities where anti-racist demonstrators have clashed with Trump supporters who have converged on protest sites, sometimes openly carrying arms while vowing to protect property from looters.

A 17-year-old Trump supporter has been charged with killing two people and wounding another with a semi-automatic rifle in Kenosha. Trump defended the white teenager, who faces six criminal counts, and declined to condemn violence from his supporters.

But in Portland, Oregon, site of three months of nightly protests that have often turned violent, a Trump supporter was shot dead on Saturday and the president lamented that “they executed a man in the street.”

Kellyanne Conway, a Trump adviser until Monday, said last week the president stood to benefit politically from the kind of unrest that erupted in Kenosha.

Meanwhile he has largely overlooked the racial wounds caused by police use of force and plays down the more than 180,000 U.S. deaths from the coronavirus pandemic. 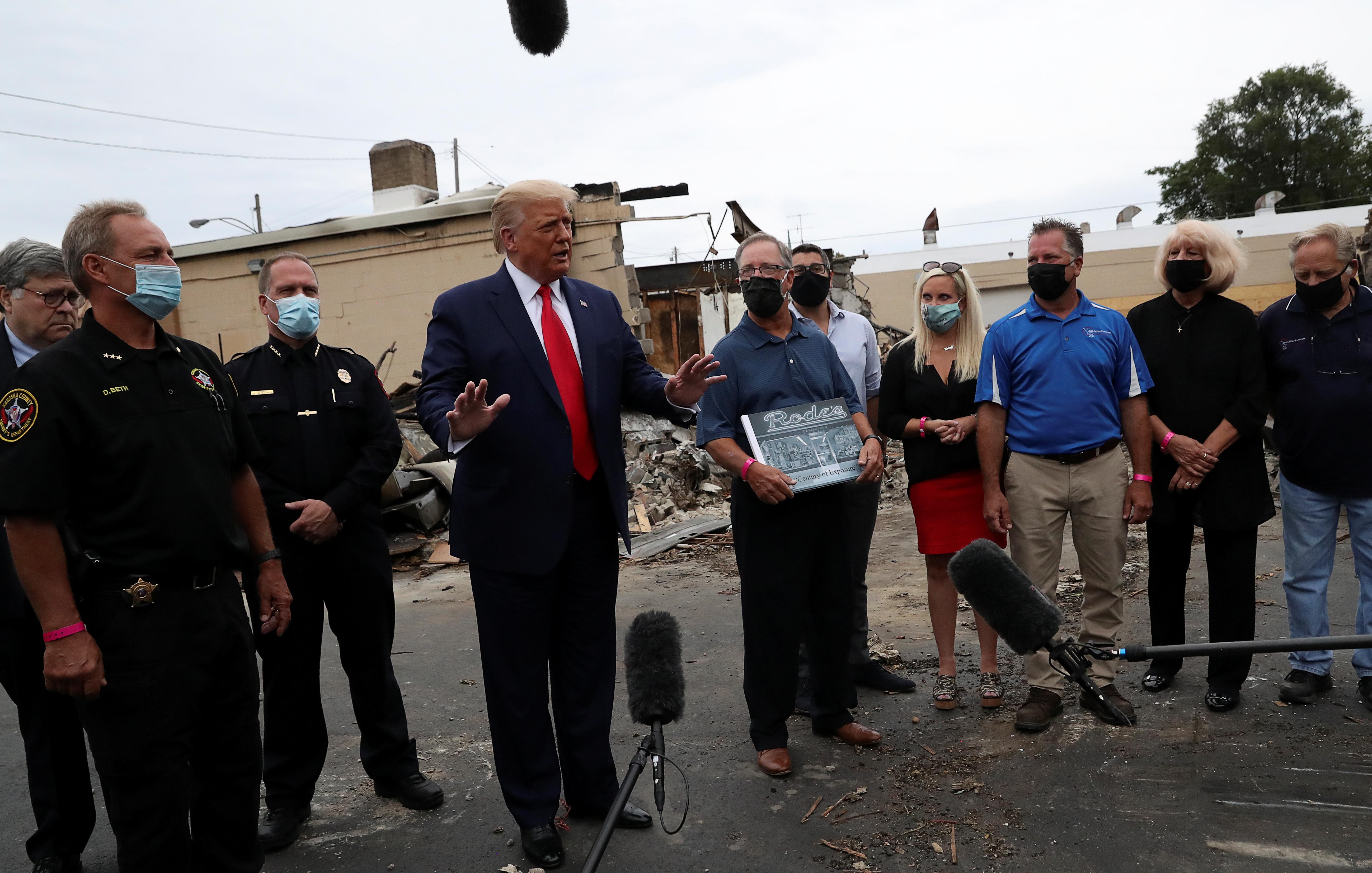 Trump said Biden would create further chaos in the streets, trying to link him to vandals and left-leaning, violent activists.

Biden has responded by calling for rioters and looters to be prosecuted while saying Trump himself was stoking the violence with divisive rhetoric, calling the president “too weak, too scared of the hatred he has stirred to put an end to it.”

Trump’s trip has increased expectations that Biden also will visit Kenosha. Biden’s campaign has said he will soon go to Wisconsin, where he has a lead in the polls, but has not disclosed details.