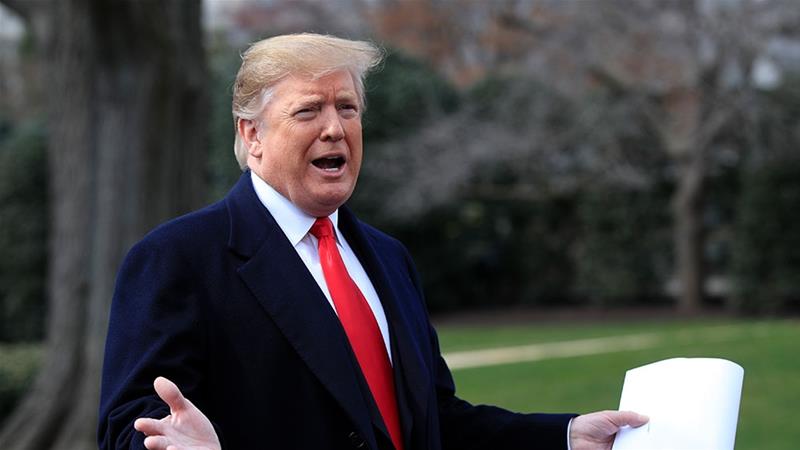 US President Donald Trump said on Wednesday he does not mind if the public is allowed to see the report that Special Counsel Robert Mueller is preparing about his investigation of Russian meddling in the 2016 presidential election and any possible links to the Trump campaign.

“Let it come out, let people see it,” Trump said. “Let’s see whether or not it’s legit,” he added.

Mueller is preparing to submit a report to US Attorney General William Barr on his findings, including Russia’s role in the election and whether Trump unlawfully sought to obstruct the probe.

Trump has denied collusion and obstruction, calling the investigation a “witch-hunt”. Russia has denied interfering in the election.

Barr, a Trump appointee, is already coming under pressure from politicians to make the entire document public quickly, though he has wide latitude in what to release.

The US House of Representatives voted 420-0 last week on a nonbinding resolution calling for Mueller’s report to be released both to Congress and to the public, but it is not clear how the measure will fare in the Senate.

Answering questions from journalists at the White House on Wednesday, Trump said he had no idea when the report would be released, adding, “no collusion, no collusion” and “we’ll see if it’s fair”.

Asked if the public should be allowed to see the report, Trump said: “I don’t mind.”

“I think it’s ridiculous, but I want to see the report,” he added.

Trump has been investigated for almost two years, following suspicions that he or his team had improper ties to Moscow.

In anticipation of the report’s release, Trump intensified his long-running campaign to question the legitimacy of Mueller, who is widely respected, and to undermine confidence in the report itself.

Trump referred to his 2016 election win as “one of the greatest … in the history of this country” and said by contrast that Mueller had no popular support.

Mueller is “a man out of the blue” and “writing a report that never got a vote”, Trump told journalists at the White House.

Mueller was appointed in May 2017 with widespread bipartisan backing in Congress, four months into Trump’s turbulent presidency. Mueller has previously held several senior positions in the Justice Department, including FBI director.