State Department says sanctions on North Korea will remain until the US achieves final results of full denuclearisation. 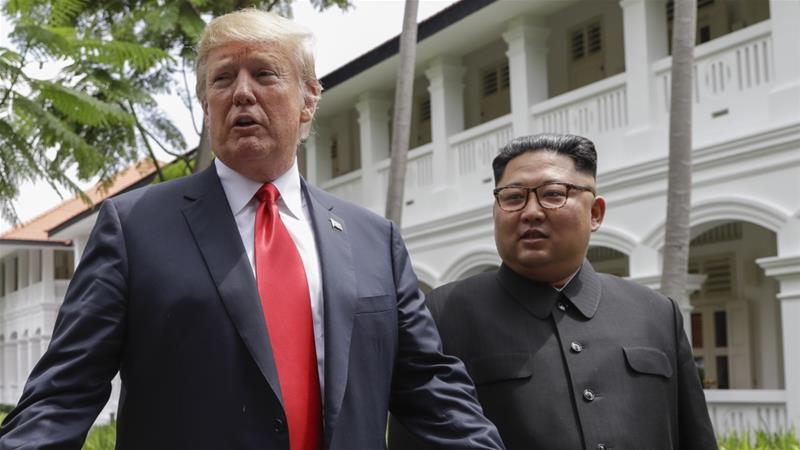 Almost a week before his second summit with Kim Jong Un, President Donald Trump of the United States says he wants North Korea to end its nuclear programme – but is in no rush for Pyongyang to do so.

Speaking to reporters at a White House event on Tuesday, Trump said that if North Korea did not conduct any nuclear tests, then he was not under pressure to achieve one of his leading foreign policy goals – convincing the country to abandon nuclear weapons.

“I have no pressing time schedule,” Trump said.

Trump said his second meeting with the North Korean leader on February 27 and 28 in Hanoi, Vietnam, would be “very exciting,” but did not disclose details of what he hoped would be achieved.

“I look forward to being with Chairman Kim and I think a lot of things will come out of it,” Trump said. “We had a tremendous first summit – it was really breaking the ice, but a lot of things came from that, including good relationships.”

Attention has been focused on whether Washington will offer to lift some economic sanctions on North Korea in return for it taking concrete steps towards denuclearisation.

On Tuesday, the US State Department said sanctions on North Korea would be maintained until Washington achieved final results of full verified denuclearisation.

Earlier on Tuesday, Trump spoke with South Korean President Moon Jae-in about the summit. He plans to talk to Japanese Prime Minister Shinzo Abe on Wednesday.

Moon told Trump in the call that his country was willing to open economic engagement with North Korea as a “concession” if it would hasten Pyongyang’s denuclearisation, the South Korean president’s office said.

Since Trump and Kim first met in Singapore in June last year, there has been little progress in talks between the two countries, while Moon and Kim have forged ahead with multiple summits of their own, as well as promises of inter-Korean cooperation on everything from reducing border tensions to launching a joint bid for the 2032 Olympics.

But plans for economic projects, such as allowing South Korean tourists to visit the North, have been on hold while the US keeps its sanctions in place.

Moon told Trump he was ready to undertake anything from reconnecting rail and road links between the two Koreas to other inter-Korean economic cooperation to help on denuclearisation, according to a statement from Moon’s spokesman Kim Eui-kyeom.

“We’re determined to take up that role if President Trump asks if that’s the way to lessen the US burden,” Moon said.

Moon said it was Trump’s “leadership and firm resolve” that had brought difficult negotiations with North Korea thus far, according to the statement.

He also said Trump was “overcoming diplomatic failures over the past 25 years that did not accomplish any outcome through negotiations but only strengthened North Korea’s nuclear and missile capabilities”.

Related posts:
Hot News
Armed fighters free 900 prisoners from DR Congo jail
Model Natalia Vodianova Turns Tech Investor
Nicola Sturgeon vs Trump: POTUS will NOT recognise an independent Scotland warns analyst
Smokenado rises in Cameron Peak fire and is caught on camera
‘A light to our lives’: Family of missing Tauranga woman plead for more information
Recent Posts
This website uses cookies to improve your user experience and to provide you with advertisements that are relevant to your interests. By continuing to browse the site you are agreeing to our use of cookies.Ok