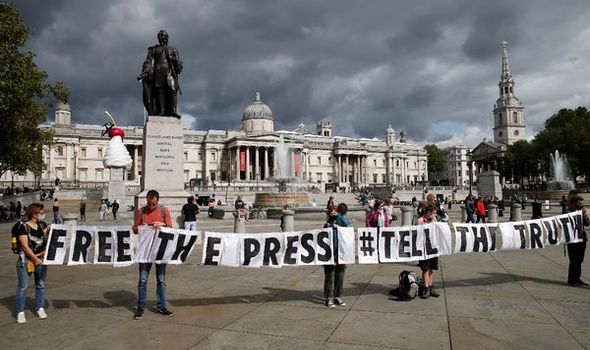 More than 100 campaigners chained themselves to bamboo structures and used vehicles to block roads outside the Newsprinters works at Broxbourne, Hertfordshire, and Knowsley, near Liverpool, at 10pm on Friday.

Police and fire crews cleared the last of the groups at around 10.30am yesterday after making at least 72 arrests.

Mr Johnson joined criticism from across the political divide as the stunt appeared to backfire.The PM tweeted: “A free press is vital in holding the Government and other powerful institutions to account on issues critical for the future of our country, including the fight against climate change.

“It is completely unacceptable to seek to limit the public’s access to news in this way.”

Extinction Rebellion, known as XR, is currently holding 10 days of protests, including a “die-in” outside Buckingham Palace yesterday, despite gatherings of more than 30 people being banned under Covid-19 laws.

Of the printing press protest, it claimed it was exposing newspapers’ “failure to report on the climate & ecological emergency, and their consistent manipulation of truth to suit their own agendas”. 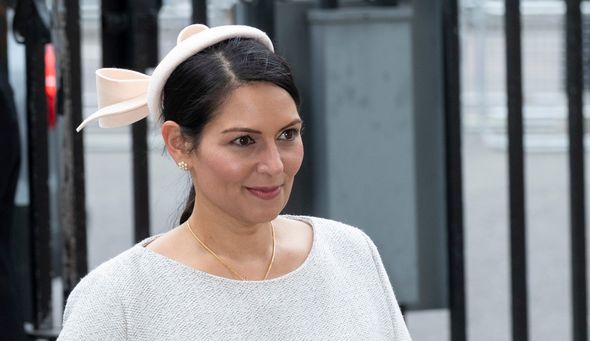 The Newsprinters presses publish the four Rupert Murdoch-owned titles – The Sun, The Times, The Sun on Sunday and The Sunday Times – as well as the Daily Telegraph and Sunday Telegraph, the Daily Mail and Mail on Sunday, and the London Evening Standard.

Newsprinters said: “Thanks to other industry partners, printing was transferred to other sites.” ButThe Sun and The Times tweeted that newspaper readers should expect some delays.

Home Secretary Priti Patel tweeted: “This morning people across the country will be prevented from reading their newspaper because of the actions of Extinction Rebellion.”

Communities Secretary Robert Jenrick wrote: “A free press matters to all of us who value a free society.

“They mustn’t be silenced by an intolerant minority.”

Labour’s shadow international trade secretary Emily Thornberry told Times Radio: “This is very worrying and I don’t really know what it is that is expected to be achieved, and I know that for many older listeners it’s very much part of their daily life, getting their paper delivered in the morning, and I just think it’s wrong.”

Tory MP Tobias Ellwood said XR had “lost sight of how to campaign”. He told Times Radio: “I fear the organisation itself has been hijacked.”Support for XR has plummeted during the pandemic, with 40 per cent of people saying they were less sympathetic to the group. Just 16 per cent were more in a survey by OnePoll.

XR tweeted that it was “sorry” for disruption caused to newsagents but it was not apologising to Mr Murdoch for disrupting his “agenda”.

The Federation of Independent Retailers said the protests had hit newsagents as well as home delivery services for the elderly and vulnerable.

President Stuart Reddish said: “This is not helpful at a time when every sale counts.”