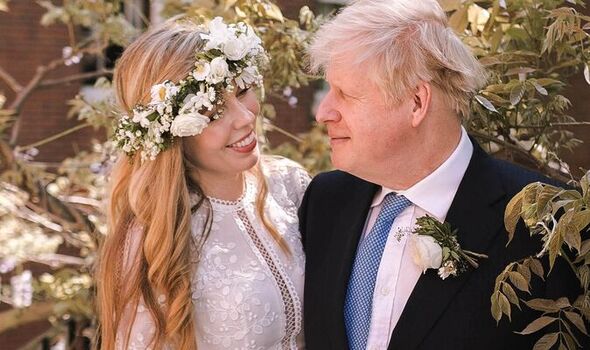 The Prime Minister wore a beige linen suit as he and Carrie celebrated last year’s marriage at Daylesford House – the home of JCB chairman Lord Bamford – near Chipping Norton, Oxon. One guest on Saturday revealed Mr Johnson, 58, quipped he had received “masses of letters to resign, mostly from my closest family”.

Carrie, 34, delivered a “touchingly funny” speech that was “full of affection” for the PM.

She wore a £3,500 gown designed by Savannah Miller – older sister of actress Sienna – that she had rented for £25 from a website.

The pair were joined on the dance floor by two-year-old son Wilf.

Mr Johnson’s family, including dad Stanley and sister Rachel, were there as well as his closest political pals.

The bash celebrated the Johnsons’ marriage in May last year at Westminster Cathedral.