BELL, California (Reuters) – Violeta Alvarez is so passionate about Bernie Sanders that she becomes emotional talking about the white, 78-year-old senator from Vermont, a state 3,000 miles from this sun-drenched California enclave. 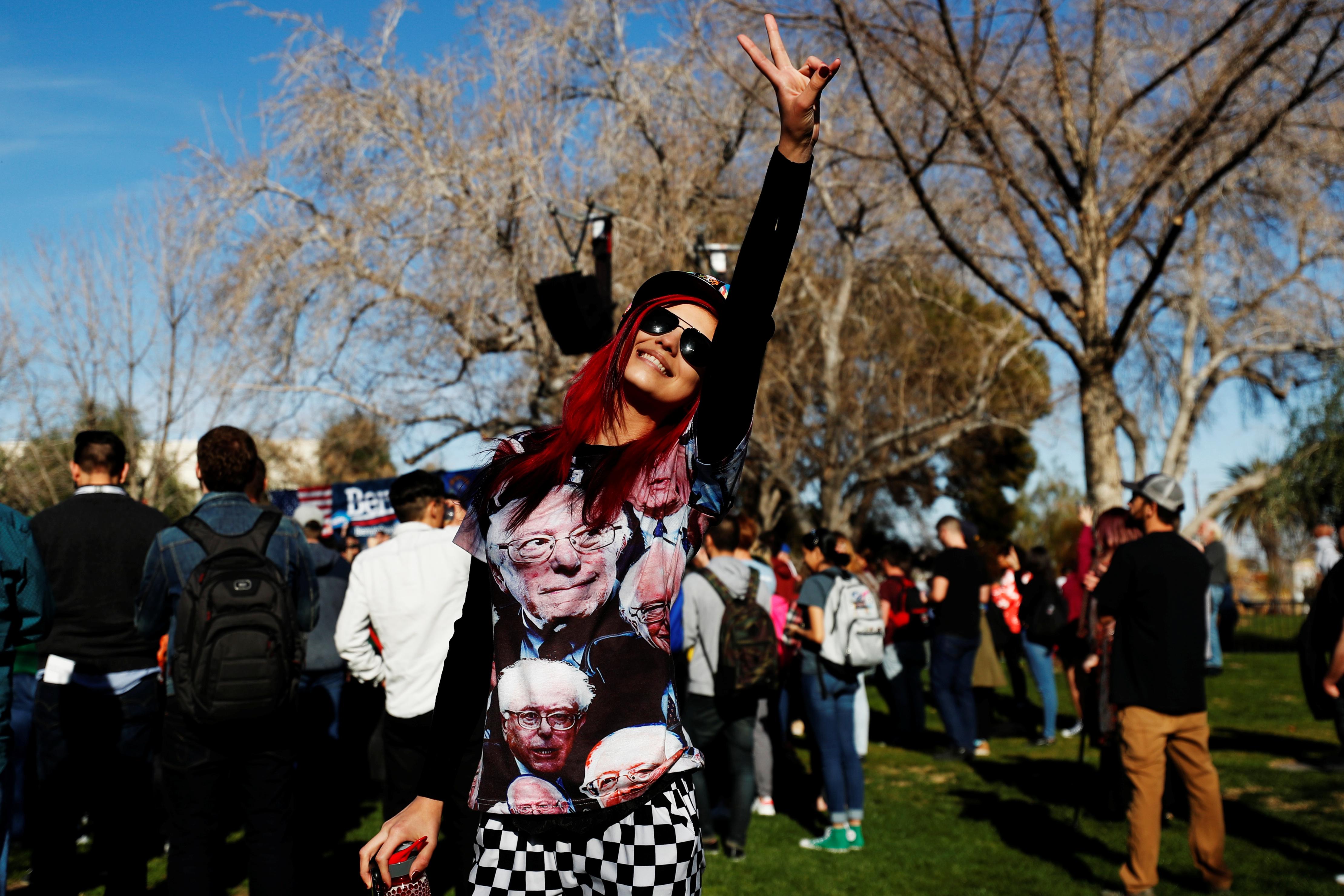 “This is the first time in my life I’ve seen a presidential candidate reaching out to the city of Bell, this small community,” said Alvarez, a 53-year-old volunteer organizer, pointing to goose bumps breaking out on her arm.

Sanders’ campaign hopes efforts in communities like Bell, a working-class, mainly Latino city of 35,000 people near Los Angeles, could be his path to the Democratic Party’s nomination to take on Republican President Donald Trump in November.

The Sanders campaign says it has prioritized outreach to Hispanic communities that often feel left out of the U.S. political process. Polls suggest that is paying off in important early states with large Latino populations, notably Nevada, which holds its caucuses on Saturday; and Texas and California, where votes are cast on March 3.

Sanders has the support of 29% of Hispanic voters nationwide, the most of any Democratic presidential candidate, according to Reuters/Ipsos polling between Jan. 22 and Feb 10. New polling released on Thursday by Monmouth University showed Sanders leading his closest rival in California, former Vice President Joe Biden, by seven percentage points thanks to predicted high turnout among Latinos.

These voters have been drawn to Sanders amid a field of Democrats that included candidates with closer personal ties to Latino communities, including Julián Castro, a former housing secretary of Mexican descent from Texas who dropped out of the race in January.

Sanders, who is Jewish, has drawn on his own origin story to explain his immigration policies, including plans to break up the U.S. Immigration and Customs Enforcement agency that Trump has wielded against undocumented immigrants.

In Reno, Nevada on Tuesday, Sanders spoke of his father, who he said arrived in the United States from Poland at age 17, penniless and unable to speak English.

“As the son of an immigrant…I will not tolerate the continued demonization of the undocumented in this country,” Sanders said.

A record 32 million Latinos are projected to be eligible to vote in the general election, exceeding the number of black eligible voters for the first time, according to the Pew Research Center. About 62% of Latino registered voters identify with or lean toward the Democratic Party, while 34% affiliate with or lean to the Republican Party, the organization says.

Sanders solidified his front-runner status in the Democratic presidential race after strong showings in Iowa and New Hampshire earlier this month. But centrists warn that if he becomes the nominee his left-wing views could alienate moderate voters and hand Trump re-election.

Some members of Florida’s Cuban and Venezuelan communities are skittish of Sanders, a self-described democratic socialist, a term some conflate with socialist policies that ravaged their homelands.

Trump drew nearly 30% of Latino voters in the 2016 election, according to Pew, a figure he hopes to grow by touting a strong U.S. economy that last year drove Hispanic unemployment to record lows.

And while the “multiracial, multigenerational movement” of supporters Sanders claims to be building could boost Democrats’ hopes in purple states such as Arizona, Latinos will matter less in older, whiter battleground states of Wisconsin, Pennsylvania and Michigan that helped deliver the White House to Trump in 2016.

Alvarez, who moved to the United States from Mexico as a child and went into local politics as a city councilwoman, went door-to-door in Bell one morning last week, speaking to residents mostly in Spanish, urging them to turn out and vote for Sanders.

Some residents were already sold on Sanders, others needed persuading. Alvarez told them he will bring them free healthcare and good paying jobs. That got their attention. All said no other candidate has had volunteers knocking on their doors, in mostly tiny houses close to a freeway.

“I’m planning to vote for Bernie,” said Jose Villarruel, 20, who is unemployed. “I’ve seen the stuff he’s talking about. He deserves to be president.” Villarruel and his girlfriend, Yasmin Garcia, 18, both liked Sanders’ plan to make public colleges tuition-free.

Across California, and in neighboring Nevada and Texas, the Sanders campaign has also put on soccer matches and house parties, some billed as “Tamales for Tío Bernie,” an affectionate Spanish-language term for “Uncle Bernie.”

The campaign wants to be deeply embedded in Latino communities, said Bianca Recto, communications director for the campaign in Nevada. She said at least half of the 200 paid staff on the ground ahead of the caucuses are people of color, many of them locals.

“It’s Bernie’s message that resonates to the economic hardships of people and not treating constituencies as if they’re a monolith, as if they’re a one-issue voter,” Recto said.

Latino support was not locked in for Sanders in this campaign. During his 2016 presidential bid, he lost ground to Hillary Clinton in states with large Latino populations, including Nevada, where Clinton criticized Sanders’ record on immigration in a debate ahead of that year’s caucuses.

Sanders had opposed a 2007 immigration bill and spoken of his concern that low-paid migrants pushed down wages for other workers in America.

This time, Sanders put people of color in key campaign positions to shape policy, and he listened to activists and immigrants themselves, said Chuck Rocha, a senior advisor to the Sanders campaign who is a Latino from Texas.

“He’s traveled around the country for the last four years listening to young immigrants talk about the struggles that they’ve had of traveling across the desert, risking their lives with their families, to come to a place that has a president that demagogues them, that treats them like second-class citizens,” Rocha said. “It’s really moved him in some of the most emotional ways I’ve ever seen Bernie Sanders react.”

This week Mijente, a progressive grassroots group that works on immigration issues, also endorsed Sanders, crediting in part his stance on ending deportations at the southern border.

The work his campaign has put into reaching these communities also impressed Washington-based activist Jess Morales Rocketto, who worked on Hillary Clinton’s 2016 presidential campaign, which fought a pitched battle with Sanders for the nomination. While still critical of Sanders, Morales Rocketto said she respects the outreach efforts she has seen through her work with two organizations representing mainly Latina workers: National Domestic Workers Alliance and Care in Action.

She said Sanders’ campaign has produced ads that appeared to be made originally in Spanish, rather than translated from English content.

“Many campaigns don’t even bother investing enough to contest for those voters,” Morales Rocketto said. “You’re seeing the fruits of that labor bear out.”

Sanders raised $8.2 million from Latino donors in 2019, more than four times his closest Democratic rivals, according to analysis by tech firm Plus Three, which counted Hispanic surnames among donors to Democrats.

In Iowa’s Feb. 3 caucuses, Sanders won resoundingly in caucuses set up especially for groups of mostly Latino workers, including a Des Moines caucus that was held solely in Spanish. And when New Hampshire voted on Feb. 11, Sanders won 42% of the vote among its small Latino community, according to exit polls.

A Univision poll this week showed Sanders winning 33% of Hispanic support in Nevada, followed by Biden at 22%.

Sanders faces headwinds in Nevada, however, as the influential Culinary Workers Union has opposed his Medicare for All plan, warning its mostly Latino members that the government-run healthcare proposal could put union-negotiated private plans at risk.

But Sanders’ net favorability among Latino Democrats was higher than any other candidate in both Nevada and Colorado, another Super Tuesday state with a sizeable Latino population, Equis Research, a group that studies the Latinx electorate, said this week.

“Any Dem candidate not named Bernie Sanders” has a lot of ground to make up with those voters, Equis Research said.

Sanders enjoys strong support among younger voters from all ethnic groups. In the Latino community, this often means children of immigrants. These young people, in turn, are sharing their enthusiasm for Sanders with their Spanish-speaking elders, a group campaigns have long struggled to reach.

“You have young daughters who have been translators for their parents throughout their entire life,” Morales Rocketto said. “And what those women are translating is Bernie Sanders.”

But some older Hispanic voters could be put off by Sanders’ left-wing politics, said Danny Turkel, a spokesman for Voto Latino, an advocacy group. Trump has already launched attacks using the “socialist” tag.

This could hobble Sanders in the crucial battleground state of Florida, with its large Cuban-American population and influx of Venezuelan emigres. Recent polls show Sanders trailing both Biden and former New York Mayor Michael Bloomberg there.

“He’s definitely going to get attacked on the socialism angle, which has affected many Latino communities,” said Turkel, whose mother is a refugee from Cuba. “Their grandparents came from countries that became failed socialist states and there’s a big resistance to that.”

But for others in struggling Latino communities like Bell, Sanders’ economic populism is attractive.

Miguel Munoz, 25, who emerged from his home wearing a Los Angeles Dodgers T-shirt, said he had lost his job as a manager at an office-supply chain just two days earlier.

Munoz voted for Sanders in 2016. This time he has managed to convince his mother to support the U.S. Senator as well, he said. Sanders’ emphasis on lifting everyone resonates, he said.

“A neighbor needs sugar, we give it to them,” Munoz said. “That’s socialism. We are already doing it as Mexicans.”