Dowden asked about what Boris Johnson should do next

Lord Cruddas, who is spearheading the Bring Back Boris campaign, has called on the Prime Minister to take action after more than 10,000 party members signed the petition calling for a rule change asking for a vote on whether to ratify his resignation. The party constitution states that a rule change needs to be considered if more than 10,000 members request it.

Speaking to Express.co.uk, Lord Cruddas argued that as party leader still, Mr Johnson has the power to appoint a new chairman of the board who could organise a ballot on whether his resignation should be accepted.

The peer, who was previously party treasurer and is one of Britain’s richest men, suggested that he would be willing to chair the party board and organise the confirmatory ballot.

“The board needs a new Chairman who is not conflicted by the current rules, the basis for this would be the 10,000 signatures from members calling for a Boris Ballot.”

Lord Cruddas has also offered to pay for the Boris ballot and the existing leadership campaign ballot, so no party funds are wasted if members vote to reject Boris’s resignation. 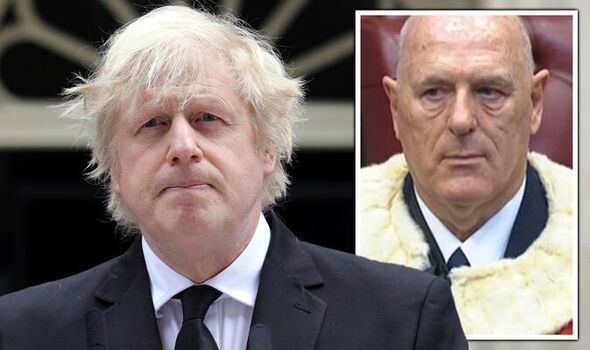 Earlier he Tweeted: “In reality, Boris as the leader can take control of the Conservative Party board. Then add a confirmatory ballot of his resignation to be voted on by members.

“If members reject his resignation, then he stays as the leader with the democratic mandate of the members.”

He added: “If the Parliamentary Party does not back him then call a General Election with him as the leader and let the electorate decide.

“I am very happy to help with this process. Either choice would be more democratic than being constructively removed by the Parliamentary Party.”

Lord Cruddas has not removed the threat of taking legal action to try to bring the current leadership election to a temporary halt if party chiefs refuse to agree to his demands and the signatories of the petition.

Party members are angry that Mr Johnson was forced out by a group of MPs just three years after thousands of them voted him in as leader with a two to one majority over Jeremy Hunt.

That was shortly followed by a general election where Mr Johnson was given a mandate by 14 million people winning the Tories an 80-seat majority, the biggest since Margaret Thatcher in 1987.

POLL: Should next PM hold a general election immediately? [REACT]

The two co-chairmen of the party Ben Elliott and Andrew Stephenson have written back to Lord Cruddas acknowledging his letter.

Members are currently voting on whether to elect Foreign Secretary Liz Truss or former Chancellor Rishi Sunak as leader to replace Mr Johnson.

The result is due to be announced on September 5.

Lord Cruddas has also told Express.co.uk that if Boris is reelected his longer term goal is to take away power from the 10922 Committee which represents Tory MPs and democratise the party.

He has also called for the party chairman to be directly elected by members.