After U.S. District Judge Amy Berman Jackson sentenced the veteran Republican operative in Washington, Trump indicated he has no immediate plans to pardon Stone and would let the legal process play out, while adding that “at some point I’ll make a determination.”

“I personally think he was treated very unfairly,” Trump said in Las Vegas.

In a stern lecture during a 2-1/2-hour sentencing hearing, Jackson delivered an implicit rebuke to Trump, who has attacked her along with the jury and prosecutors in the high-profile case.

“There was nothing unfair, phony or disgraceful about the investigation or the prosecution,” Jackson said, citing words that the Republican president has used.

Stone’s lawyer had asked that he get no prison time. The 67-year-old Stone, who has been a friend and adviser to Trump for decades, was convicted on Nov. 15 on all seven counts of lying to Congress, obstruction of justice and witness tampering.

“The truth still exists. The truth still matters,” Jackson added. “Roger Stone’s insistence that it doesn’t, his belligerence, his pride in his own lies are a threat to our fundamental institutions – to the very foundation of our democracy.”

The judge also said Stone “knew exactly what he was doing” when he posted an image on social media last year with a gun’s cross-hairs placed over her head.

“The defendant engaged in threatening and intimidating conduct toward the court,” Jackson said. “This is intolerable to the administration of justice.”

Stone declined to speak at the hearing. Clad in a dark gray pinstripe suit with a polka dot handkerchief in the pocket, Stone stood at a lectern as the judge delivered the sentence.

After leaving, Stone – still subject to a judicial gag order – told reporters, “I have nothing to say.” In a chaotic scene outside the courthouse, Stone walked through a throng of people with a slight smile on his face and climbed into a waiting vehicle.

Stone’s lawyers have asked Jackson for a new trial, and his allies have complained that some of the jurors have expressed anti-Trump sentiments on social media. Some Trump’s allies have urged him to pardon Stone.

At a Las Vegas event for rehabilitated prisoners, Trump praised Stone as a “good person” and “smart guy” while repeating his claim that the trial’s jury forewoman was “totally tainted.” Trump said he would not use the presidency’s “great powers” as Stone seeks a new trial, but left open the possibility of a pardon.

Democrats said a pardon would be a green light for others to break the law to further Trump’s interests. 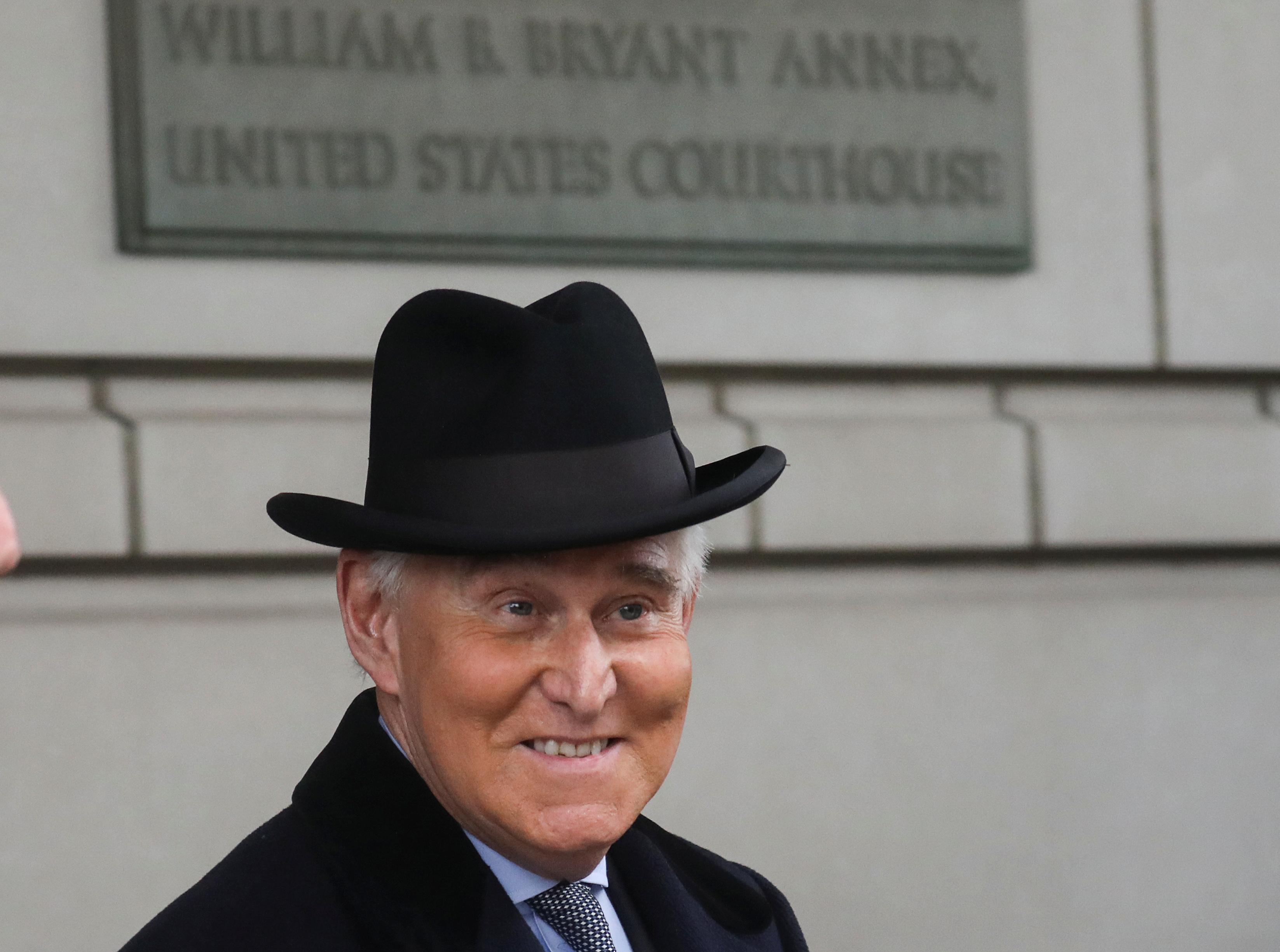 “To pardon Stone when his crimes were committed to protect Trump would be a breathtaking act of corruption,” Democratic Representative Adam Schiff, who led the impeachment drive against Trump that ended in his Senate acquittal this month, wrote on Twitter.

Jackson’s sentence fell well short of the seven to nine years initially recommended by the case’s original prosecutors before they were overruled by the Justice Department after Trump complained publicly. Those prosecutors quit the case. Jackson, appointed by Trump’s Democratic predecessor Barack Obama, said the department’s reversal did not influence her sentencing decision. The judge also fined Stone $20,000.

“This was still a very substantial sentence, especially for a non-violent, first-time offender of his age,” said Mark Allenbaugh, a consultant who formerly worked for the U.S. Sentencing Commission.

Stone was one of several Trump associates who were convicted or pleaded guilty to charges stemming from former Special Counsel Robert Mueller’s investigation that detailed Russian meddling in the 2016 election to boost Trump’s candidacy.

He was convicted of lying to the House of Representatives Intelligence Committee about his attempts to contact WikiLeaks, the website that released damaging emails about Trump’s 2016 Democratic election rival Hillary Clinton that U.S. intelligence officials have concluded were stolen by Russian hackers.

Defense attorney Seth Ginsberg said Stone’s career as a self-described “dirty trickster” overshadowed other aspects of a spiritual man who has served as a mentor, loves animals and is devoted to his family.

“Mr. Stone is, in fact, not simply that public persona, but a human being,” he said. 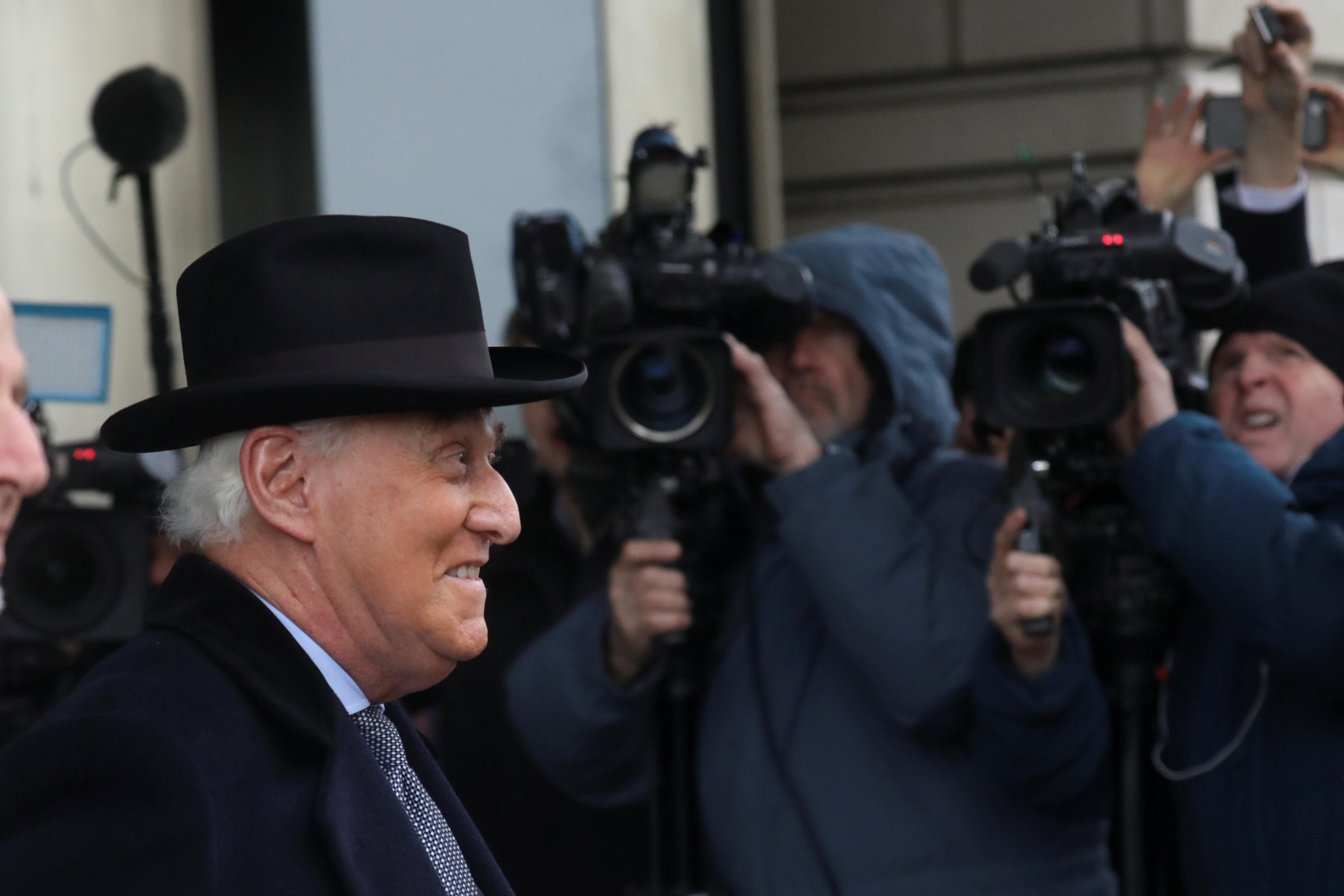 The judge noted Stone was not charged with or convicted of having any role in conspiring with Russia. But Jackson said Stone’s effort to obstruct a congressional investigation into Russian election meddling “was deliberate, planned – not one isolated incident.” The investigators were not some “secret anti-Trump cabal,” Jackson said, but lawmakers on a committee led at the time by Republicans.

Stone’s career has stretched from the Watergate scandal era of the early 1970s to Trump’s campaign four years ago. Stone has labeled himself an “agent provocateur” and famously has the face of former President Richard Nixon tattooed on his back.

Wearing sunglasses and a dark fedora as he entered the courthouse accompanied by an entourage of family, friends and lawyers, Stone strode past a giant inflatable rat dressed as Trump and a sign calling for his pardon. One onlooker shouted: “Traitor!”

After prosecutors made their sentencing recommendation last week, Trump called them “corrupt” and railed against this “miscarriage of justice.” Attorney General William Barr intervened and the Justice Department overruled the recommendation. Congressional Democrats have accused Trump and Barr of politicizing the U.S. criminal justice system and threatening the rule of law.