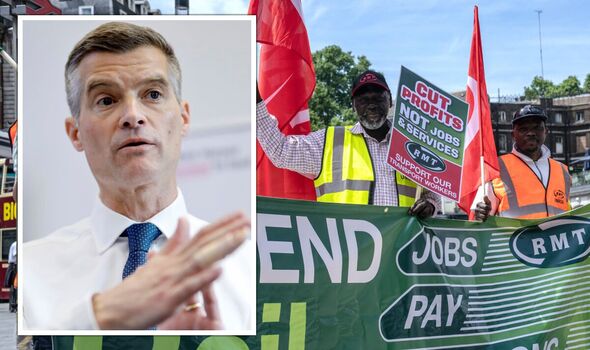 Mark Harper said that companies will be negotiating with a “revised mandate”, adding that he has made sure a “better deal” on pay was on the table.

Operators Network Rail and the unions are to start the next round of talks over pay and conditions in an attempt to end the industrial action.

Mr Harper told Sky News yesterday: “The train operating companies have got permission from me to make a new offer to rail unions.

“That is what they are going to be doing. That is what I was asked to do, that is my role in the process.

“But it is important now that we give some space for the employers, so that is the train operating companies and Network Rail, to continue having discussions with the RMT to try and reach a conclusion.”

Pressed about whether his role in giving permission meant he had control over the negotiations, the Cabinet minister said: “They have got a revised mandate to make an offer to the trade unions, to cover both pay and also importantly, reform. They will be having those discussions this coming week.”

Mr Harper said he ensured there was a “better deal on the table for rail workers”.

But it cannot come at the expense of reforming the railways, he said.

Mr Harper added: “But remember there is another side to it…which is it’s important that we get generational reform both on the maintenance side of the operation for Network Rail but also for the rail companies.

“I want a proper seven-day railway where you don’t have to run a rail service by depending on the goodwill of people turning up on their
days off.”

Asked if he was optimistic that industrial action could soon be brought to an end, the minister said: “I hope there will be a deal.

“I am not going to put an artificial timetable on it.

“I think as soon as you start putting artificial deadlines on things you tend to end up with a bad deal.”