Ms Miller launched her attack after Commons Leader Jacob Rees-Mogg ordered the closure of a cross-party Commons committee set up to examine Britain’s relations with the EU. The decision has led to allegations that Mr Rees-Mogg has deliberately tried to undermine parliamentary scrutiny of the Trade and Cooperation Agreement (TCA) that was finally secured on Christmas Eve with Brussels.

“More and more examples of Boris Johnson’s Government’s power-grabbing, dismantling of Parliament’s sovereignty and our representative democracy. People wake up!”

The businesswoman and activist has been a prominent and outspoken opponent of the Government. 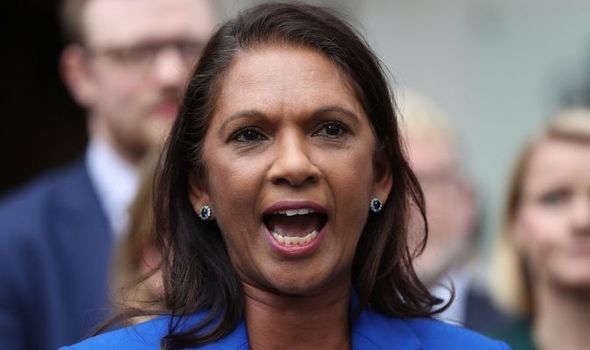 She won a legal bid against the UK Government over its authority to implement Brexit without approval from Parliament in 2016 and in September 2019 successfully challenged Boris Johnson’s prorogation of Parliament.

Her latest attack on the Government comes after critics claimed Mr Rees-Mogg’s move blocked a planned six-month inquiry into the Trade and Cooperation Agreement and also means there is no longer a Commons committee to monitor the implementation of the deal.

Mr Rees-Mogg rejected an appeal from the Committee on the Future Relationship with the European Union – formerly the Committee on Exiting the EU – for a six-month extension beyond its planned closure date of 16 January in order to allow time for an inquiry into the Christmas Eve deal.

In a letter to committee chairman Hilary Benn, he said: “There will be plenty of opportunities for questions, statements and debates, as well as the detailed analysis of the house select committees in the months ahead.

“Whilst this is ultimately a matter for the house, it is the view of the government that your committee’s work should come to an end in line with the current temporary standing orders, which were agreed by the house.”

Furious committee member Joanna Cherry said the 21-member panel was being disbanded because “the Government don’t want to hear the truth” about Mr Johnson’s deal.

The SNP frontbencher said: “Jacob Rees-Mogg wants to stop the committee from continuing its scrutiny of the agreement Boris Johnson negotiated with the EU because he knows the more we get into the detail of it the more problems we will uncover.

“For example, earlier this week an expert legal witness confirmed that, contrary to claims by Priti Patel, the UK will not be a safer place under the law enforcement and judicial cooperation parts of the agreement.

“She agreed with senior police officers and security experts who say that our access to vital databases in the fight against crime has been lost or significantly restricted.

“The government don’t want to hear the truth, that’s why our committee is being disbanded. It’s yet another example of parliamentary scrutiny being stymied by Boris Johnson.”

Another committee member said: “The Trade and Cooperation Agreement between the UK and EU is the most important international treaty that we have, as it governs our relationship with our largest export market and nearest partners and allies.

“It’s, therefore, beggars belief that the government thinks that there is no need to have proper select-committee scrutiny of this hugely important treaty and of our future relations with the EU.

“It is quite ironic that those who campaigned so actively for Brexit on the basis of returning sovereignty to the UK parliament now seem to be doing all they can to undermine our parliament’s ability to do its work.”