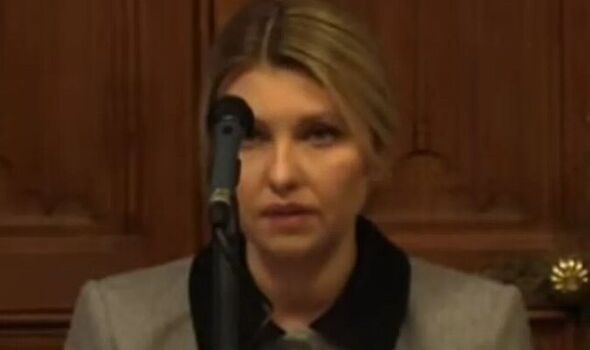 Olena Zelenska today vowed that Ukraine “will not surrender” in a speech in Parliament.

Ukraine’s First Lady received a lengthy standing ovation as she concluded her address to MPs and peers.

Ms Zelenska said:”Ukrainians are going through the terror, which will resonate with you.

“Your islands survived the air raids, which were identical to those that Russia uses now to put us on our knees.

“We’re hearing sirens every day identical to those which were heard by earlier British generations. You did not surrender and we will not surrender.

“But victory is not the only thing we need. We need justice.”

Ms Zelenska urged the UK to be a “leader” in her country’s bid for justice.

She asked MPs and peers to support the call for a special tribunal, saying: “Justice like victory is not possible without allies.”

She argued that the International Criminal Court (ICC) does not have the legal force to punish Moscow for its invasion.

She said: “We need to start the special tribunal against the crime of aggression of Russia against Ukraine, which will enhance the work of the ICC and not weaken it.

“We need to unite the world community just as it happened in January 1942 to support the special tribunal against the aggression of Russia against Ukraine.

“I’m asking you a small favour to become the world leader in the justice efforts.

“I believe that London can give this decisive impetus so that the world can become better, fairer, thanks to you.”

House of Commons Sir Lindsay Hoyle introduced the wife of Ukrainian President Volodymyr Zelensky by saying it was parliamentarians’ duty to “keep the world awake” to the horrors of Russia’s invasion as he praised her “bravery”.