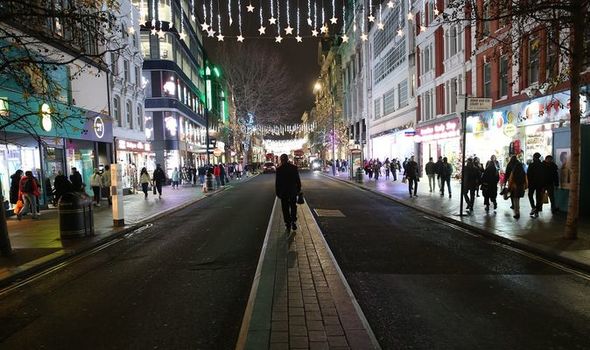 A Downing Street source has indicated that current evidence showing that the latest covid variant is 50 to 70 percent less dangerous means more restrictions are “much less likely”, although they “cannot rule anything out”. It comes as Tory backbench MPs have made it clear that they will repeat their pre-Christmas rebellion if the Prime Minister comes back demanding a “circuit breaker” lockdown.

Bars and clubs have warned they could be forced to close for good if they are unable to trade on New Year’s Eve and the Archbishop of Westminster has urged Number 10 to keep places of worship open, saying: “Most people are sensible and cautious. We don’t need stronger impositions to teach us what to do.”

A Downing Street source said all options remained on the table. The source said: “It’s obviously good news [about the severity of Omicron], but it’s still early data and we don’t have much about it’s impact on older people yet. So it’s a bit up in the air.”

The government is due to make a decision on further restrictions tomorrow (MONDAY). Boris Johnson has said ministers “can’t rule out” any further measures. Earlier in the week, Downing Street sources now say that the latest evidence on Omicron means that it is “much less likely” more restrictions will be needed. However, the source added: “But that is caveated as obviously it is still early data so we are not ruling stuff out yet.”

Senior backbenchers have told the Sunday Express they believe Boris Johnson decided against bringing in further restrictions in England last week because he is fearful of a potential attempt to oust him if he takes on his own MPs.

The approach contrasts with the measures brought in by SNP First Minister Nicola Sturgeon in Scotland and Labour First Minister Mark Drakeford in Wales. In Scotland Hogmanay New Year celebrations have been cancelled by Ms Sturgeon and football stadiums and other venues will be empty. Mr Drakeford has threatened to fine people £60 if they go to work while from Boxing Day no more than six people will be allowed to meet in pubs, restaurants and cinemas in Wales.

The refusal by Mr Johnson to introduce restrictions in England follows three reports last week suggesting that the Omicron variant is 50 to 70 per cent less likely to hospitalise sufferers than the Delta variant.

In South Africa, where the variant was first discovered, cases are dropping off in the Gauteng province where it began and levelling off in three other provinces. It also emerged that two thirds of the patients in hospital with Covid had gone in for other reasons and tested positive while there.

It is widely believed that the Prime Minister would have already agreed to more restrictions including a circuit breaker if it had not been for the rebellion by 101 of his own MPs, which forced him to rely on Labour votes.

The Sunday Express has been told that Chief Medical Officer Chris Whitty and Chief Scientific Adviser Sir Patrick Vallance provided video briefings to backbench MPs last week in a bid to persuade them to back more measures but failed to win over many of the rebels.

A member of the 1922 committee which represents backbench Tory MPs said that in reality more than 200 were against the vaccine passports and more restrictions. “The Prime Minister could be facing a much bigger rebellion next time,” they noted. North West Leicestershire MP Andrew Bridgen said: “There is no doubt that had it not been for that rebellion we would now be living under much tougher restrictions.”

Critics argue that government scientists are being too cautious about the threat from omicron, particularly given the impact on the economy of new restrictions. Last week Sir Patrick defended the Sage modellers, who were criticised for being overly pessimistic.

New models released over Christmas suggest the UK is about to be hit by a large wave of Covid hospitalisations and the peak could be even higher than last winter. Sage papers included University of Warwick modelling looking at tighter rules starting on Dec 28 or New Year’s Day and lasting until Jan 15, Jan 28 or even March 28.

The latest of those dates, if it was adopted by Boris Johnson, would mean England going back into tighter restrictions for three months after Christmas. It is longer than publicly suggested by some of the most cautious scientists and politicians.

Sage minutes warn that the peak on hospital admissions ‘may be comparable to or higher than previous peaks’ – including the second wave in January. The modelling has not yet been examined by ministers.

But professor Carl Heneghan, of Oxford university’s Centre for Evidence Based Medicine, said: ”The modelling data has been consistently wrong in the past, and current projections have already been shown to be erroneous. But they are forcing the Prime Minister’s hand who has no alternative view to go on. Nearly two years into the pandemic we need an overhaul of how forecasts are produced and interpreted, and an alternative approach to inform ministers and end this pandemic.”

Anthony Brookes, Professor of Genomics and Bioinformatics at the University of Leicester said covid no longer posed a significant threat to “the vast majority of people” due to the fact it causes a milder illness in most due to the way it has mutated and because of vaccines and new treatments. However he said hospitals are still likely to be under “severe pressure” due to the large number of hospital acquired infections, staff isolation rules, the large non-covid backlog together with hospital infection control measures which slow the pace of hospital procedures.

He said: “Even if Omicron caused no deaths or severe illness, hospitals would still struggle this winter because of all the measures brought in to control covid as well as the fact that hospitals have been told to clear the non-covid backlog.”

The Prime Minister is also acutely aware of the threat from his own party. Sources say that dozens of letters needed to be sent to the 1922 committee chairman Sir Graham Brady to trigger a leadership election “have been written but not yet sent”.

One former cabinet minister told the Sunday Express: “There is no doubt Boris is feeling vulnerable. After the North Shropshire by-election defeat and the Christmas party scandals he is not in a strong position to take on his own MPs over new covid measures they do not want and believe will severely damage the economy even more. It could take just one more big problem for the Prime Minister for MPs to decide to try to get rid of him.”

South Dorset MP Richard Drax MP said: “It is time to trust people to get on with their own lives and for the state to back right off. Another lockdown will not prevent the spread of Omicron but it would devastate lives and livelihoods. Enough is enough!”.

Speaking before Midnight Mass at Westminster Cathedral, Archbishop of Westminster Cardinal Vincent Nichols said: ”I would sincerely appeal that they do not again consider closing churches and places of worship. I think this country has shown that people can make good judgements themselves. We’re at that point of saying we understand the risk. We know what we should do.”