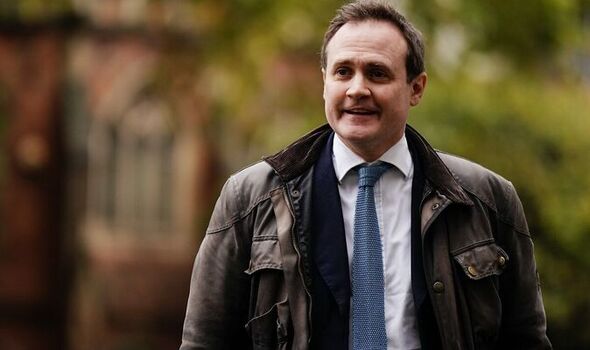 Tom Tugendhat sounded the alert after former PM Liz Truss’s mobile was targeted by agents believed to be working for the Kremlin during her time as Foreign Secretary. Commons Speaker Sir Lindsay Hoyle urged MPs to follow advice from the Government’s National Cyber Security Centre. He wrote to them: “As recent events have highlighted, hostile states continue to target Parliamentarians to gain insight into, or exert influence over, our democratic processes for their economic, military or political advantage.”

Sir Lindsay went on: “Our phones contain so much information – our messages, emails, contacts, photos and social media posts, including private, sensitive, personal, historic and sometimes even deleted data.

“They go almost everywhere with us, and have cameras and sensitive microphones built-in, making them a potential goldmine for hostile states (as well as criminals and fraudsters) who wish to obtain sensitive information about Parliament and Parliamentarians.”

He added: “If hackers have switched on the microphone on one phone, everyone in the room might be overheard.”

Former soldier Mr Tugendhat, who served in Iraq and Afghanistan, heads a Westminster taskforce addressing threats to the country’s democratic institutions. He said “our democracy is under attack” and that the Speaker “is right to warn all MPs”.

The security minister added: “That’s why I’m leading a new taskforce to bring together different groups that can protect our core sovereignty – the right to choose who leads us.”

He added: “Levels of education aren’t high enough. I don’t think people are focusing enough on the risks to their security and their devices.

“Because these are hidden, threats aren’t properly understood. I think that’s as true of ministers as anyone else. And there’s a premium on making sure that they’re educated.”

The ex-spymaster said that there was “no such thing” as a totally secure mobile phone.

A large amount of material was allegedly downloaded from Ms Truss’s phone although it is unclear when it was hacked.

Tobias Ellwood MP, chairman of the Defence Select Committee, said last month: “This is a constant threat from Russia, they are getting better and better at these cyberattacks and hacking.

“We take the most stringent measures to make sure it doesn’t happen.”