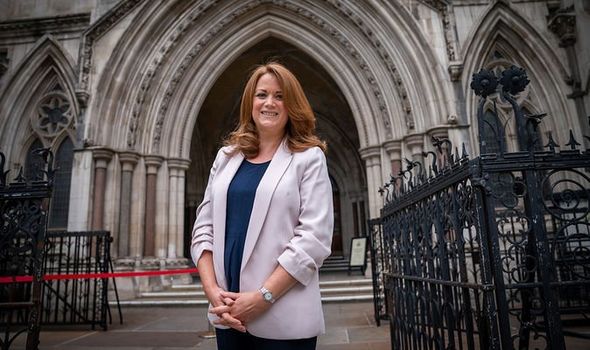 Griffiths, 51, once a small business minister and Theresa May’s chief of staff, had tried to prevent Judge Elizabeth Williscroft’s findings being made public, but lost High Court and Court of Appeal fights.

Mrs Griffiths, 51, now Tory MP for her husband’s old seat of Burton, Staffs, said: “When I stood for election as a Member of Parliament, I promised I would be a voice for those who have been victims of domestic abuse.

“I am committed to working to improve both the support available to, and the outcomes for, those who have been through similar experiences to me.” Judge Williscroft is overseeing a dispute between the Griffiths centred on a child. Last November, she considered Mrs Griffiths’ allegations about the way Griffiths treated her.

She found that on the balance of probabilities, Griffiths had raped Mrs Griffiths, pressured her into sexual activity and used “coercive and controlling behaviour”.

However, the judge decided her findings should not be made public in order to protect the child.

But Tortoise Media journalist Louise Tickle and a PA news agency reporter launched a legal fight, arguing the public had a right to know. The High Court ruled the findings should be revealed.

Tortoise Media editor Basia Cummings said had they not fought their case, “the privacy of the family courts would have allowed a former politician to hide his abuse and denied his wife any chance to speak about it”.

Griffiths resigned as an MP in 2018 after reports he had sent “depraved” social media messages to two women constituents.